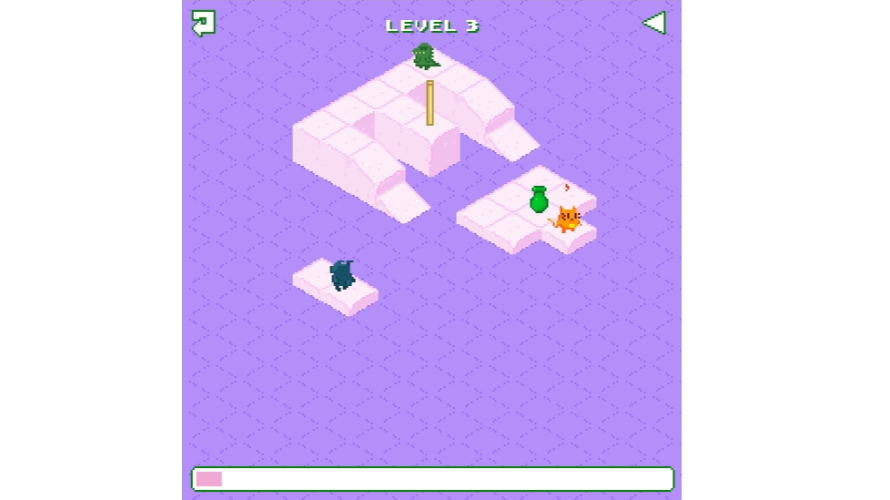 One cat, one dream jar, one path, and way too many unstable platforms. These make up your protagonist, objective and obstacle course, in each level of Computer Dreams. Now, since tiles sink once crossed, it’s fortunate that you have the power to raise and lower surrounding ones; but only those, and each lowered lets you raise exactly one. Tricky? You bet.

Were it not for the requirement to collect that fancy dream jar, the game as a whole would be noticeably easier. Probably also a lot less interesting though, no matter how frustrating it was to almost reach the exit and raising that checkered flag, only to then realize I was a couple of blocks short. As such, the lack of an undo feature means you’ll have to either plan ahead or risk finding yourself stuck, goal almost within reach, yet not quite.

Ain’t no turn-based affair either, much as I wish it was, upon the introduction of patrolling dogs (and… dragons?). After finishing the first five levels, I’d say these were more of an annoyance than the addition of a fair challenge, as getting caught by one seemed almost too easy. Their predictable movement patterns did help balance things somewhat, but being unable to raise/lower a tile fast enough to create a wall/gap between me and the creature in question forced a level restart more often than I’d have liked. Could just have been a matter of poor timing and/or a lack of skill though, but even so.

That annoyance aside, generally speaking, Computer Dreams is an entertaining platform manipulation puzzler (there’s a mouthful), which uses a basic mechanic to create surprisingly complex levels. Nothing a bit of careful thinking and planning can’t take care of though, I’m sure, and to play… simply point your browser to this here link. So what say ya help our nameless feline protagonist collect those dream jars?