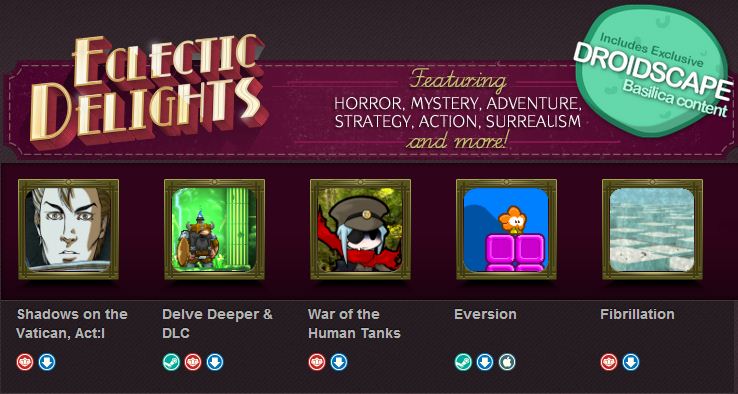 Hot on the trail of the Adventure Bundle and Deep Space Bundle, Kyttaro Games are back for thirds with Eclectic Delights (gotta love that name). Unlike another bundle provider, which seems to be suffering from an identity crisis recently, this one is packed with nothing but indie games, just like the first two.

While the formula itself remains unchanged – it’s still pay-what-you-want ($0.99 minimum), with a select few games only being available if you pay more than the average – the content is a fresh batch of indie goodness, from platforming to strategy, horror and even a.. FMV rhythm-action-fighter (what?!). Uh.. anyway, paying (at least) $0.99 gets you the following games:

Paying more than the average gets you these too:

Anyone who makes a purchase, even the $1 crowd, also gets access to exclusive Droidscape: Basilica (iOS/Android) content once the game is out. There are also a bunch of extras which will be unlocked once certain sales milestones have been reached. These include soundtracks for Adventures of Shuggy and Droidscape: Basilica, plus an Adventures of Shuggy digital comicbook (woo!). Why are you still reading this? Eclectic Delights is only available for 12 more days, so head over to http://www.bundle-in-a-box.com and pick up your bundle of quality indie games already..