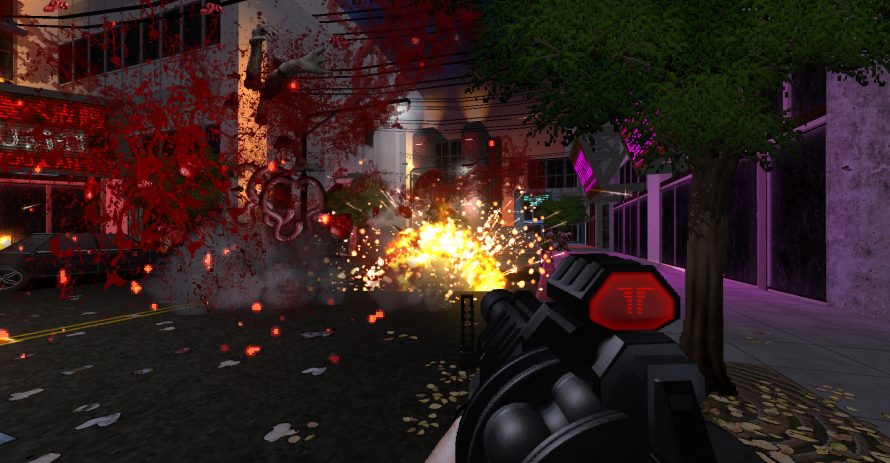 While retro shooters aren’t exactly a new thing, even ones built on the same tech that powered the classics (WRATH: Aeon of Ruin uses Quake tech, Ion Fury is powered by Build Engine, etc.), I do not recall ever seeing a brand new retail title that runs on modified Doom – as in, the 1993 original – tech. That is, until SGtMarkIV, creator of the awesome mod, Brutal Doom, revealed Brutal Fate, and it is already looking mighty spiffy!

Now, while nostalgia does have a lot to do with my interest in Brutal Fate, seeing how it’ll be powered by GZDoom, a well-known Doom source port, chock-full of demons that explode in a shower of red particl – oh right, that’s… blood. Yup. They all get turned to tiny pieces, blood spraying everywhere, as the player kills them. Right. What else would one expect from a project by the maker of Brutal Doom, a mod with a heavy focus on turning a classic shooter into an absolute gorefest, complete with groovy new toys to help ramp up the carnage?

Coincidentally, all of that actually also applies to Brutal Fate, even though there will be no code recycling. Fast pace, absolutely insane blood splatter, and an awesome arsenal? Definitely. Or as the developer himself puts it: “We got battle rifles, shotguns, grenade launchers, smart missiles, laser rifles, nukes, knives, sharp sticks, you name it.” Gotta love a shooter with sharp sticks to battle demons. Effectiveness? Who cares. Sharp sticks!

Will you fight alongside your brothers and sisters in arms and try to find a way to escape this nightmare? Or throw your own humanity away and dive into the abyss for a chance of your own survival?

Much like in classics like Quake, Doom, and Duke Nukem 3D, secrets will be plentiful, much like… enemy count. In fact, how does taking on upwards of fifty at once sound? Good? Great, because that’s going to be a thing, and you won’t be able to blame failure on the level generator either as the entire lot will be handcrafted. A nice change of pace, for no matter how well-coded procedurally generated levels in a shooter are, nothing compares to handcrafted ones. Nothing.

Last but not least, Early Access. See, the version hitting Steam in January – alongside a demo – will only feature between six and eight levels, two boss fights, and at least one Horde Mode map (wave defense). It’s still a lot more than many Early Access titles start out with, however, and over time, until its planned 2022 release, Brutal Fate will continue to grow with more levels, enemies, weapons… more… EVERYTHING! YEAH! Ahem. Oh right, a quick FYI to wrap this up: pictures currently on the Steam page are “extremely WIP“.