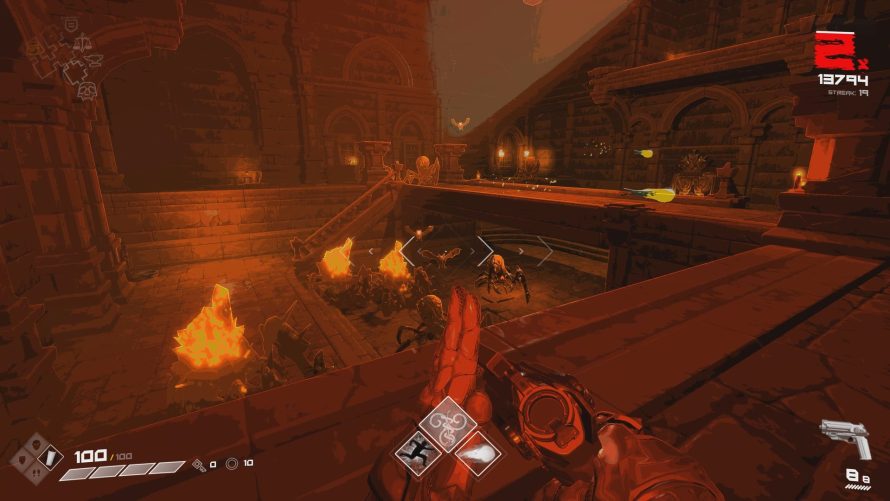 Well, Asgard is in trouble. Again. As has become the norm whenever someone attempts to invade that place, only you, the player, can help repel the pesky forces… who has made the journey from the underworld to wreak havoc in BPM: BULLETS PER MINUTE. Time for some rhythmic gunslinging as an all-powerful Valkyrie!

At least, that’s what I like to think makes up the bulk of the experience in BPM: BULLETS PER MINUTE. Chances are the bit about being all-powerful is a bit of a stretch – until you get used to rockin’ to the beat, that is. Not just shooting either. Everything is tied to the rhythmic aspect here: jumping, double jumping, rocket jumping, bunny hopping, and of course, dashing. All to fill a rather important combo meter. So the only way to really tilt the odds in your favor is to get into the groove. Unless you just enable Auto-Rhythm Mode, in which case the experience loses more than a little of what makes it so unique.

In fact, based on the trailer below, I’d say everything is fast, furious, and accompanied by an absolutely rockin’ soundtrack. With its randomly generated dungeons, more than 40 items, and no less than 7 bosses standing between you and that ever-elusive victory screen, a high degree of replayability is just about guaranteed. Much like your untimely demise if you get careless or underestimate your opponents. We are talking about creatures gutsy enough to invade Asgard here after all. Ain’t no way they’re just going to be a bunch of weak push-over demons, so choose your Valkyrie and get ready to rock!

BPM: BULLETS PER MINUTE is available on Steam and GOG.com, carrying a $19.99 price tag.