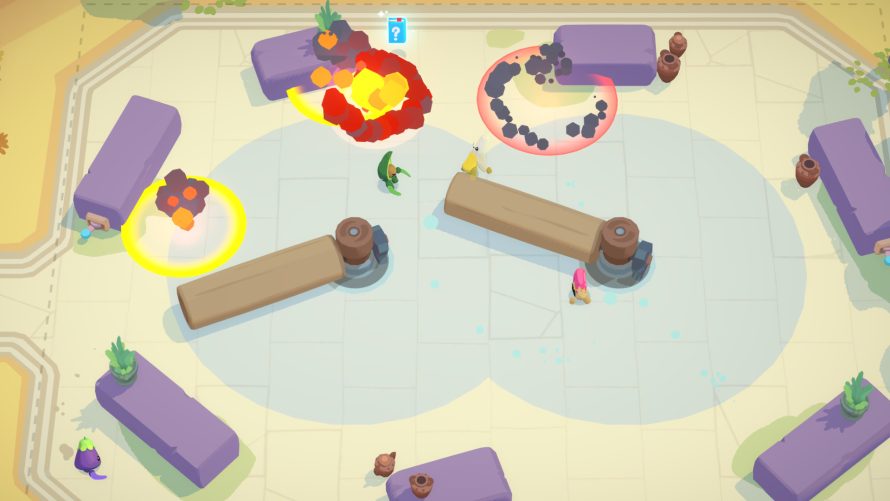 It’s (almost) time to get the party started… again. In the form of a spectacular, chaotic, grand ol’ food fight, no less! Boomerang Fu aims to serve up just that after all, what with up to people slicing and dicing as their favorite foods in ever-changing arenas – ones overflowing with traps and power-ups! Ah, my kind of menu.

Speaking of which, can’t choose between the boomerang, disguise, or telekinesis (to name but a few of the available power-ups)? Don’t worry, you won’t have to! Unlike so many other top-down brawlers that force silly things like balancing, restricting players to a single power-up at a time, Boomerang Fu throws caution to the wind, allowing everyone to stack as many as they can get their hands on. Chaos? Carnage? Madness? Mayhem? All of the above, surely, and it all just sounds so very groovy. Even more so since players will be able to enable and disable specific power-ups/features, tweaking each match to their liking: friendly fire? Sure, why not! Shields? Useless. Off! …and so on.

Oh, and if you don’t have five friends willing to join ya in this local-only affair, worry not: bots are a thing, complete with a difficulty setting and all. Seeing how this one’s for up to six at a time, filling the ranks with AI-controlled opponents is bound to be a thing for many – myself included – if for no other reason than to ensure maximum destruction. Which obviously ain’t gonna happen with only 2-3 characters rampaging across each of the 30 aptly dubbed ‘Kung Fu arenas’, so… send in the clone! Or some such. Actually, wait, no. Up to six players, twelve skins – yeah, won’t be any confusing cloning shenanigans here. I think. Banana, Donut, Bread, Bacon, Carrot – so many choices!

Choose from a variety pack of game modes and battle in open fields ripe with vegetation to hide in, mazes filled with deathtraps, misty temples hiding interlinked portals, and many more dynamic stages.

“It only takes one stick and three buttons to pulverize your pals.”, or so the developer would have everyone believe. But keep in mind that your weapon of choice here is in fact a boomerang, and you better believe they work just like in real life, curving and slicing those corners (and your opponent(s)) for some genuinely skillful combat. Attacks can also be deflected and traps triggered, making the whole thing far more than some basic three-button-mashing affair as sliding walls crush your opponents and everything blows up, blinding friend and foe alike. By which I mean that team-based multiplayer also seems to be on this already delicious menu. Kinda makes me wonder if 2v2v2 will be a thing in Boomerang Fu? We’ll just have to wait and see.

Boomerang Fu will be on Steam, Switch, and Xbox One, come August 13.

Boomerang Fu - Release Date Trailer - Nintendo Switch, Xbox One and PC
Facebook Twitter LinkedIn Pinterest Tumblr WhatsApp Telegram E-mail
Previous article Scale it Down for the Love of Pixels: 64x64 is the Limit in Upcoming 'LOWREZJAM 2020'
Next article 'The Corruption Within' Aims to Kickstart a Victorian Point 'n Click Adventure