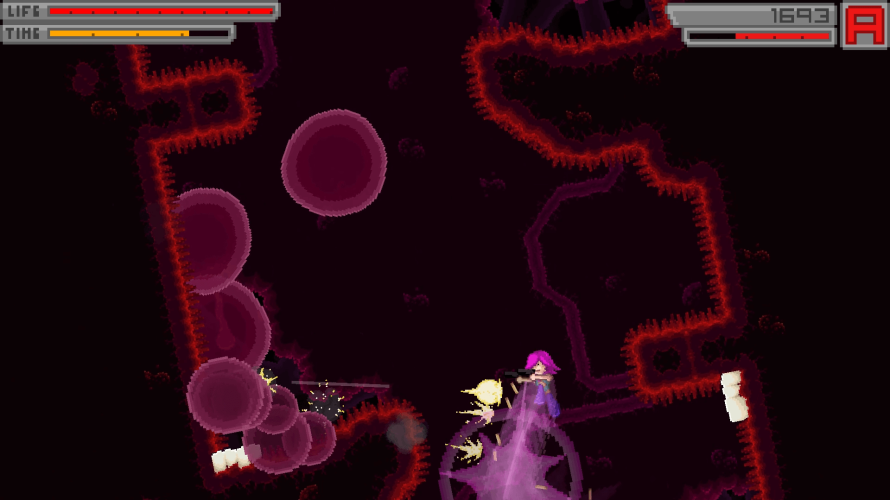 We all have dreams. Or, at least, we should. Dreams are good. Dreams help us strive towards being better. Being more than we are. Being the best that we ca – right. Anyway, point is, Wryn – Bleed‘s protagonist – has a dream: to be the ultimate videogame hero! Her way of accomplishing said dream is the best part, as she’s going to… take out the Greatest Heroes of All Time (no really). Groovy stuff.

Needless to say, such a task is going to require guns. Lots of guns. Shotguns, pistols, flamethrowers, rocket launchers. Probably other guns too. So it’s a good thing that Wryn has access to all those, alongside a nifty slow-down-time ability, for her rather absurd mission. That and some quite fancy movement skills, because why not?

During my time in her shoes, gunning down everything in sight, dodging bullets and enemies left and right, I realized just how great a challenge it was to become the fabled ‘ultimate videogame hero’. So much that, after playing a level or two on normal, I actually cranked down the difficulty to easy… and still struggled a bit. But only a bit. I was quite surprised to find that not only did enemies take fewer bullets before popping out of my way (quite literally at that), there were also fewer and their tactics had changed with the jump in difficulty. A peculiar, yet quite welcome feature.

As such, the inclusion of ‘hard’ and ‘very hard’ – not to mention the unlockable one-life arcade mode – means there’s plenty of replay value in this one. Alongside generous checkpoints, fortunately, and a wealth of upgrades – all of which will have to be purchased from the main menu. These do carry over between difficulties and modes though, meaning one could theoretically finish the game on easy and start grinding away, to then crank up the challenge once better equipped for it. Or, you know, go nuts and start on very hard right away. Would not recommend this at all but to each their own.

However you choose to approach Bleed‘s story though, know this: mastery of movement is essential to surviving the onslaught. See, unlike most other 2D titles, this is no simple run-and-gun affair, in that Wryn’s jumps (yes, plural) act more like mid-air dashes, giving her some serious mobility. Ain’t limited to up, down, left, and right either, as instead, the player actually has full control over her aerial abilities. A feat which proved absolutely crucial during just about every boss battle, in my experience (yes, even on easy). 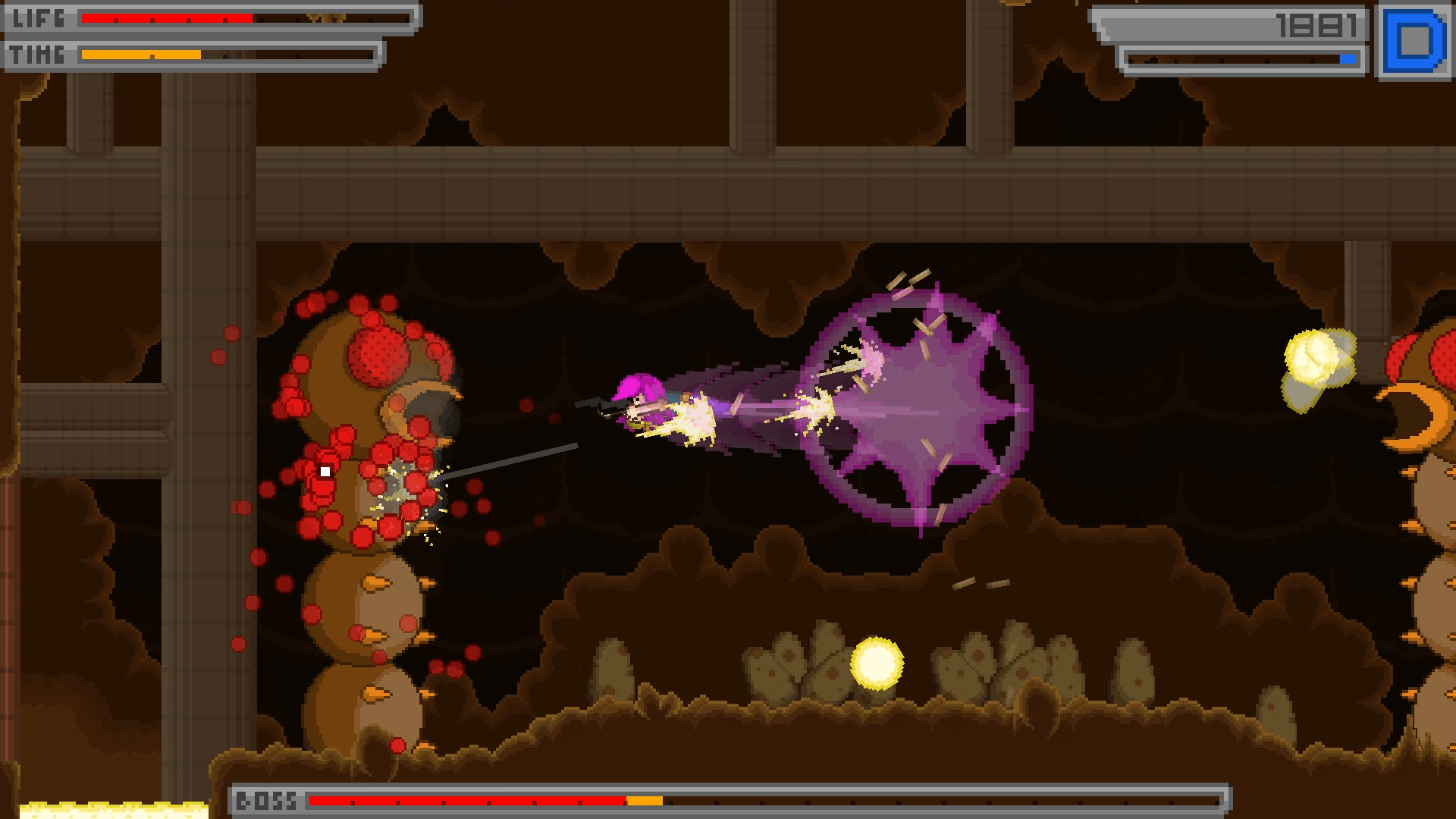 See, while normal enemies are more or less easy to deal with, the game’s many boss battles… are quite a bit more challenging. Challenging and incredibly varied, both in terms of appearance and tactics required to take each down, as you blast your way through the seven stages. These range from simple dodge-and-shoot-until-dead to encounters that rely heavily on the aforementioned time manipulation that Wryn has. For some reason. Sure would like to know how she acquired that, actually.

Whatever the case… for times when bullets, rockets, and burning jet streams simply won’t cut it, time can be slowed to a crawl. Until the bar empties at least, at which point you’d better be ready to think fast again, as there’s no grace period between ‘slow’ and ‘normal’ speed in this game. It’s either-or, so be sure to make the most of it. Oh, and I’d highly recommend prioritizing related upgrades – after health additions, of course.

This, combined with Wryn’s ability to dash around like a ninja, makes for an absolutely exhilarating experience, overall. Doesn’t hurt that level layouts seem to be structured around this either, certain sections being just about impossible to navigate at 100% speed. Unless you fancy losing a fair chunk of health before even reaching the boss area that is. Most don’t, but eh, there are those out there who want to make games as challenging as humanly possible. In case ‘very hard’ isn’t enough, for some reason. 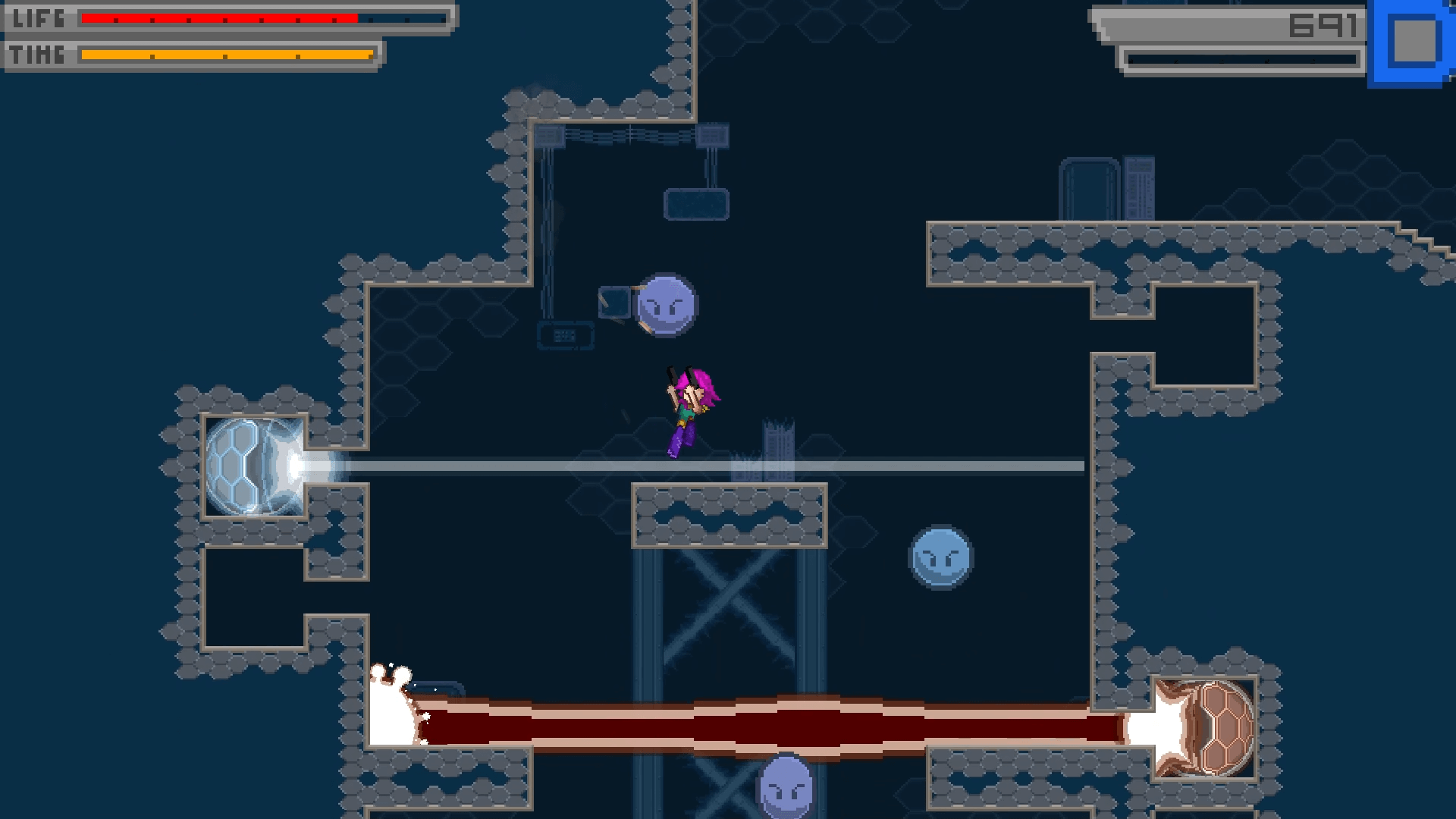 Do you know what else the ability to dash around levels rapidly means? Extra speedrunning potential! I mean, far as I can tell, normal enemies can be skipped entirely with enough precise movement, giving those skilled enough a quick route to each boss battle. Personally, though, I was satisfied simply surviving, taking my time, and such. Kinda had to anyway, or this review wouldn’t be anywhere near as detailed as it is, if I’d simply raced through Bleed. On top of that, ‘new game+’ (or rather ‘every upgrade acquired’) would be the way to go, were I to attempt a speedrun of something like this. What can I say? I know my limits.

Wryn doesn’t though. No matter how many times I got her killed, she was immediately ready to restart from the last checkpoint, or even replay entire levels to test different weapon combinations (such tenacity!). Revisiting earlier stages with weapons and/or various upgrades I didn’t have access to earlier did make for a noticeably different experience too. The projectile spitters mostly altered how I approached each encounter, as opposed to actually dealing more damage or such, however. Which I can certainly appreciate.

At the end of the day, an experience like this is better suited for an arsenal that provides the player with different means rather than powering them up, later unlocks replacing earlier entirely. Like, say, something that pierces multiple targets would be great against Guppy as that thing splits upon taking enough damage (I know, boss spoilers, sorry!), while the flamethrower works better for targets that don’t move around much. Different weapons, different uses, and that’s about it. If there are differences in damage output, I certainly couldn’t tell during my time with the game. 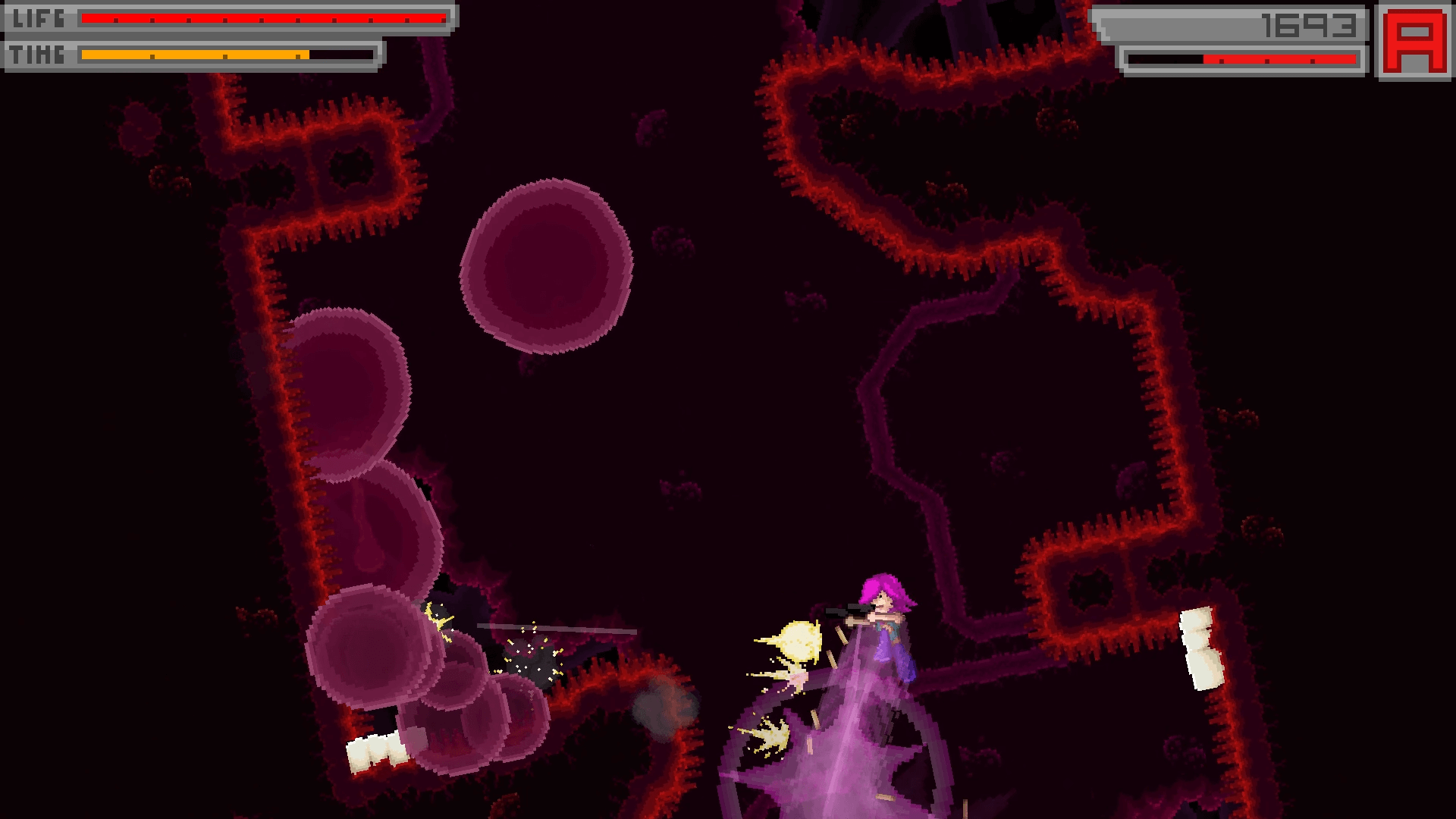 Same goes for their impact on the style bonus, which is likely inspired by games like Devil May Cry. But again, maybe I was simply too busy surviving to notice, or played on too low a difficulty for it to matter much. Either way, this – along with death count and difficulty – determines how many points you get upon completion of a level, acting as a direct multiplier. So if you decide to start grinding upgrades, keep in mind that stylish play is where it’s at. Plus… it never hurts to strive for badassery.

Speaking of, be sure to crank the music volume way up because Bleed‘s soundtrack is absolutely amazing! Some really good chiptune stuff there; especially the main theme. Kinda like its art style actually, which is also surprisingly old-school – in the best possible way. Just the right level of pixelation, with fluid animation across the board, from enemy deaths to visual cues as Wryn dashes through the air (did I mention how much I love that part of the game?).

One thing I didn’t get to test for this review, sadly, is the co-op aspect. Couldn’t persuade anyone to pick up a controller and run through the game with me, although I have a feeling it would have been absolutely glorious. Especially if I had managed to unlock any of the other three playable characters (each tied to difficulty clear), so we wouldn’t have been stuck with a Wryn clone for player two. But alas, did what I could, which is to say… I finished the game, replayed a bunch of levels, bought a bunch of upgrades, and kicked some serious you-know-what.

That said, all in all, in spite of Bleed having been out for more than half a decade at the time of writing, the game is still a very easy recommendation as it has aged quite nicely. Oh, and even if this isn’t your favorite genre bar none, give it a go anyway. Who knows, this just might be the game to change that. Won’t know unless you try (hint: a demo is available).