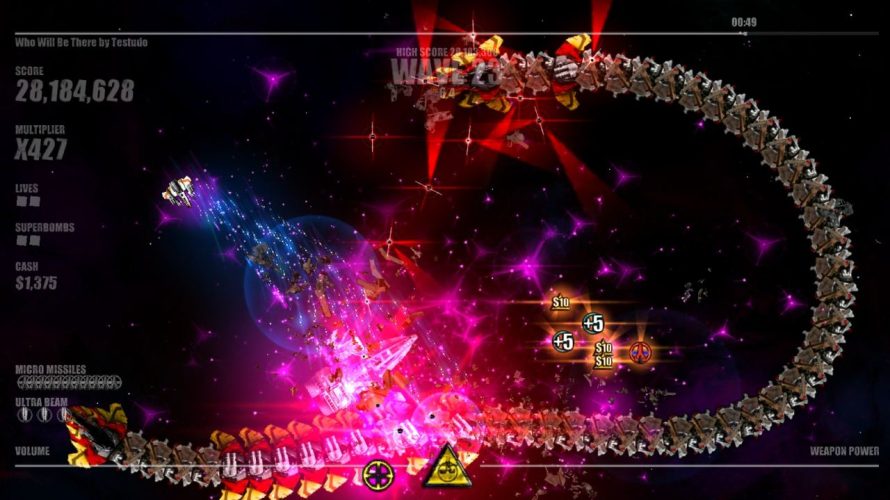 Ever wondered what it would be like to play a twin-stick shooter where your firepower, enemy spawn patterns and more, all were based on the beats, vocals, etc. from whatever is in your playlist? Because that’s exactly what you get with Beat Hazard Ultra, and the Android port has finally been released!

Like most of its kind, this one also focuses big time on high score chasing, with a few key additions to help keep things fresh, including ‘perks’ that modify various aspects of the gameplay. These include several different powerups, two unlockable difficulty levels (‘insane’ and ‘suicidal’ – believe me, they live up to their names), a higher multiplier increase for staying alive and even extra perk slots, for those who are having a hard time choosing which to use for each run.

In case your music doesn’t provide enough variety on its own – something you’ll never be able to blame me or the developer for – there are also several different ways to play Beat Hazard Ultra, apart from the standard mode. Survival and Boss Rush will provide quite a challenge, while Chill Out brings a far more relaxed experience to the table. So if you feel like a daredevil with balls of steel, go ahead and try Survival on suicidal difficulty. Just don’t say I didn’t warn you.

Beat Hazard Ultra can be picked up from Google Play for absolutely nothing! The page does mention a launch sale, and the iOS version is $2.99, so… who knows? But free is free, so be sure to pick it up if you have an Android device. Wha.. you seriously need further convincing? Here’s my review of the PC version, which can be picked up from Steam. Now if you’ll excuse me, there is music to play and leaderboards to climb.