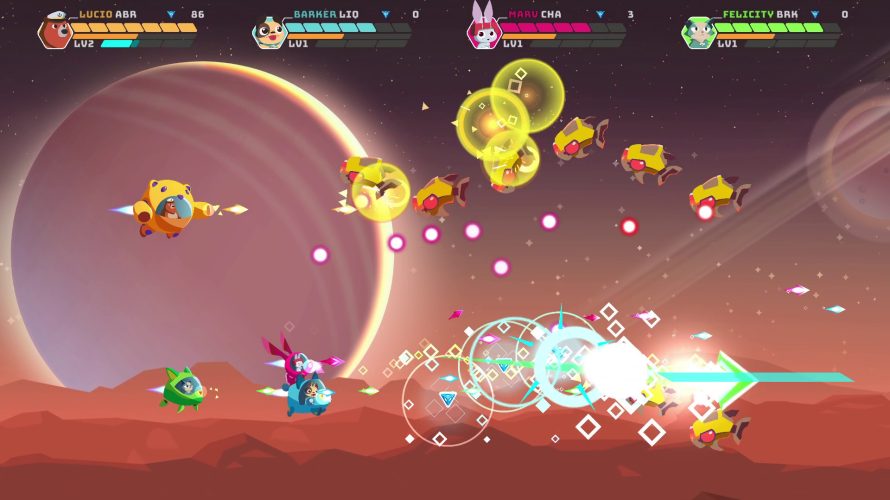 Well, this is it folks: the Dark Tide, a cybernetic fish armada, has invaded Earth. We’re doomed. Unless you join Team B.ARK as an animal pilot to kick some you-know-what and send those fishies back where they belong… with a splish and a splash. With some big explosions while you’re at it.

As you’ve likely already deduced from the above screenshot, B.ARK is a side-scrolling shoot ’em up, and for up to four players no less. But since there are only four playable characters, well, I guess it’s first come first serve, as for who’ll end up as Barker the Dog, Felicity the Cat, Lucio the Bear, or Marv the Rabbit. All have their own unique ship, weapon types, and Super abilities too, making it more than simply aesthetics/personal pet preference. I mean, I’m sure some would claim bears can be considered pets. Wouldn’t recommend it though.

Anyway, with ruthless Crush-taceans, Metal Head sharks, and screen-filling bosses to overcome, you’re going to need firepower. Lots and lots of firepower. Which is there Fusion Combos come into play, as these can be used to get out of most tight spots. Like, say, when there are enemies everywhere. Which is bound to happen. Oh, and if you want another reason to bring a friend – or perhaps even three? – along: Side-Car Mode! See, downed players can be picked up by a teammate, ensuring no one is ever truly out of the game, and this also makes it easier for people of different skill levels to still play together.

So what are you waiting for? Go blast those pesky cybernetics. Earth won’t save itself, you know. B.ARK loud and proud!