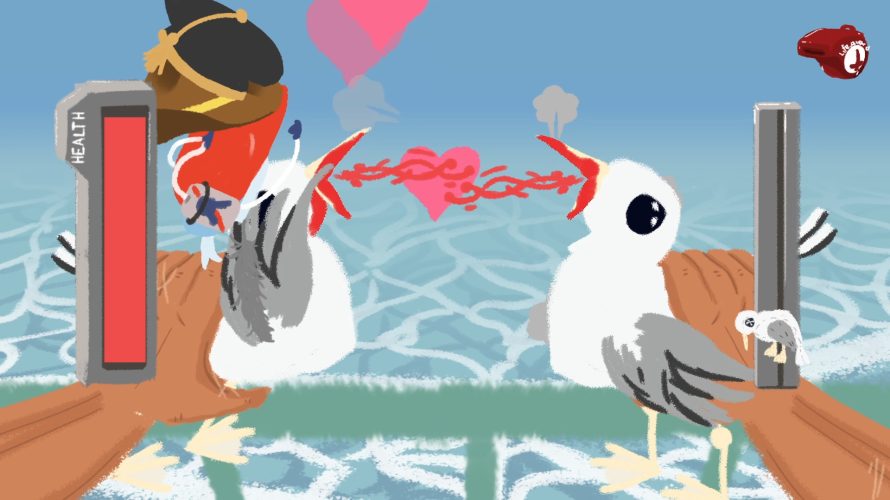 Have you ever tried playing matchmaker for birds? Let me tell ya, getting those darn things to smooch to appease a hell fiend is a task all its own. What do you mean, I’m not making a whole lot of sense? It makes perfect sense to me. Smooching, hell fiend, reward. No, really, and… there are so many Hot Seagulls in Your Area!

But in all seriousness, this game got weird almost immediately, and I’d be lying if I said it wasn’t fun. In a truly strange way. Stepping into the shoes of a “Bodybuilding Baywatch Babe” is not exactly something I have much experience with, in spite of having played some truly weird video games over the years. So I figured, why not give it a go? Get a bunch of seagulls to make out and Bob’s your uncle. Or mine. I don’t know.

Been a long day. Lots of birds. Lots of lipstick. Lots of smooching. The birds. Not me. Just the birds, and what a bunch. What… a… bunch! Each comes with its own backstory and description too. Compatibility? Sure, let’s go ahead and pretend that’s a thing in this crazy world. I kinda doubt it though. If anything, it’s far more likely that each seagull simply has its own unique quirks, which may or may not make getting it to flop its tongue and flap its wings as you attempt to make it… well… make out with another of its kind.

Definitely plenty of variety amongst the seagulls on this here boardwalk, and you’ll likely have to twist and turn a lot of them repeatedly to not only fill the smooching meter but also… to avoid getting pecked. Because unsurprisingly, birds don’t like being manhandled the way one has to with all the Hot Seagulls in Your Area. That said, no pain, no gain, and if you want what the hell fiend has promised, there’s no way around it.

Grab a bunch of seagulls, put them to the test – or tests, actually – and maybe, just maybe, things will turn out alright in the end. If not, at least you’ve made a bunch of birds very… happy. I think. The jury’s still out on that one. I had fun playing at least, and I believe that’s all that truly matters. No birds were harmed during the writing of this review, as far as I could tell. Didn’t really do a whole lot to confirm. Oh well. Mine?

Hot Seagulls in Your Area -Trailer
Facebook Twitter LinkedIn Pinterest Tumblr WhatsApp Telegram E-mail
Previous article Break the Curse That Plagues an Entire Kingdom in Dark Fantasy Metroidvania 'ENDER LILIES: Quietus of the Knights'
Next article Only a Team of Pets Can Save Earth From Cybernetic Fish in 'B.ARK'