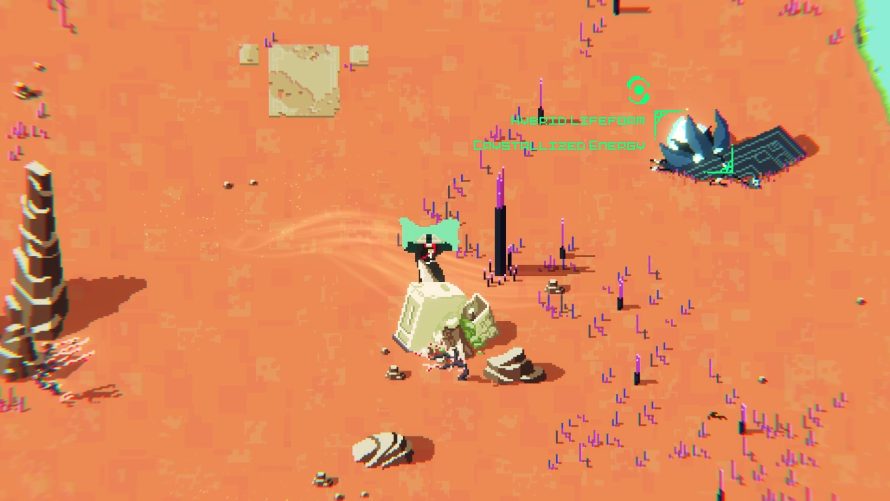 I don’t know who I am, where I am, or why I am here, but that’s not going to stop me from wandering about, sword in hand, dash ability by my feet, ready to kick you-know-what until I find answers to at least some of these mysteries. In Aube that is. I’m quite aware of my real life situation. Or am I? Maybe I’m still in the Matrix!

Dated references aside and in all seriousness, I would very much like to know more about the story of Aube‘s faceless ninja-esque protagonist. But alas, I suspect that is something which shall forever remain shrouded in mystery – along with how he/she ended up on this strange planet. A planet with more than a few oddities in the form of what appears to be ancient tech? (Read: puzzles to solve and teleporters to activate.)

Knowing so very little did not stop me from enjoying myself however, even if I did get absolutely destroyed several times in a row – by the very first enemy! Yeah. Here’s the thing: if you attempt to rush your opponent(s), chances are it will end with you getting stabbed, and you can only take so many hits before it’s lights out. So much like in a fencing match, you have to carefully move around, looking for an opening, to then strike with the swiftness of an Acanthophis (aka. ‘death adder’, a very dangerous snake), hopefully landing a hit. Rinse and repeat until someone dies. Easy? Not in the slightest, but at the same time, so very satisfying.

Fortunately(?), combat only makes up a small portion of the experience, the rest focusing on exploration and puzzle solving, flicking switches and… well, not sure whether there’s more to it further in, because I ended up calling it quits due to a lack of guidance (and likely being far too impatient during stretches of aimless wandering) before managing to activate the second teleporter. I did pick up a new ability and dispose of more than a few foes prior to giving up and writing the article you’re reading right now, so while the credits didn’t roll on my playthrough, fun was still had, and isn’t that what matters the most?

Suffice to say, Aube is a game that, if expanded upon ever so slightly, could do very well on Steam with a price tag somewhere around the $5 mark. But as it stands, oddly enough, this rather lovely – albeit at times confusing – title will in fact cost you absolutely nothing to pick up. After spending a good thirty minutes learning to be patient in combat, dashing through its gorgeous pixellated world on a mission of exploration (or at least that’s what I told myself, given the game’s complete lack of backstory), I’d say it’s a journey well worth embarking on. Just remember: patience is a virtue.

Aube is available for free on itch.io.