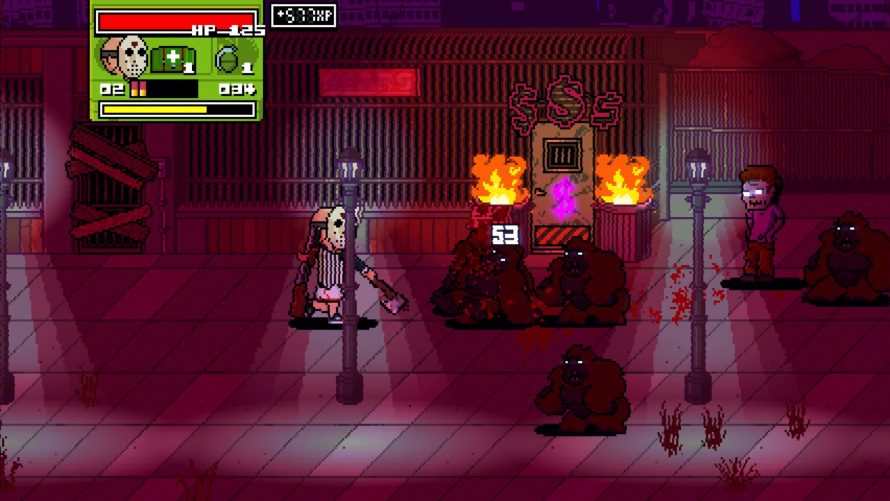 Welcome to 1991. Zombies took over the world four years ago. How did the protagonist in Dead Pixels II: Straight To Video actually survive from 1987 to 1991? I honestly couldn’t tell ya if I wanted to, as my time spent with the demo mostly consisted of sneakily stabbing the undead with a variety of knives… and blasting them with my trusty shotgun. Who cares though? There are zombies to kill and XP to gain!

Oh right, your objective in this zombie infested nightmare of a groovy action RPG isn’t to just slaughter as many undead as possible. It’s also to, you know, escape. By traversing a certain number of city blocks (four in the demo), each of which are randomly generated at the beginning of a new game, and overflowing with a variety of enemies (read: zombies).

After hitting the options menu to enable/disable the CRT and/or VHS filters, the old-school TV border, and a bunch of other things, it was off to the character generator for me; that is to say, how I wanted my avatar to be portrayed from start to finish, as the only thing that would change – visually – once embarking on this very unsafe journey… is the weapon I wielded.

That is not to say there were no actual character progression to be found in the Dead Pixels II: Straight To Video demo, as I most certainly grew, time and time again. Upon accumulating enough XP that is, which in turn enabled me to do more and, depending on where skill points are spent, perhaps even more and kill faster. Fun times for sure, and who knows, maybe you’ll even meet a shopkeeper who lets you exchange a chunk of dollar bills for a skill tree reset? Or maybe you won’t meet any other human beings. Such is the curse of procedural generation.

Dead Pixels II: Straight to Video is a procedurally generated side scrolling shooter set in a post apocalyptic city in the near future of 1991. Fight your way through the hordes of the undead as you try to find a way out of the city. Raid buildings for supplies and work with other groups of survivors in order to get out of this nightmare with a pulse.

I encountered several though, serving as a nice distraction from gunning down hordes of braineaters and a way to clear out my limited inventory space… in exchange for cash. Because even if zombies roam the land, money does still make the world go ’round, and ammo is anything but plentiful. Which means you’ll want to practice the ‘hit and run’ tactic of stabbing a zombie and then quickly moving out of harm’s way, repeating said maneuver until it falls apart, one or more coins where it once shambled.

Pre-release demos don’t always make me genuinely excited for the full version, but that was definitely the case with this one. I’d love to experience more of Dead Pixels II: Straight To Video‘s world, even if it’ll likely end up kicking my ass later on – first game did at least, way back in 2012! But we’ll see. More brains, anyone?