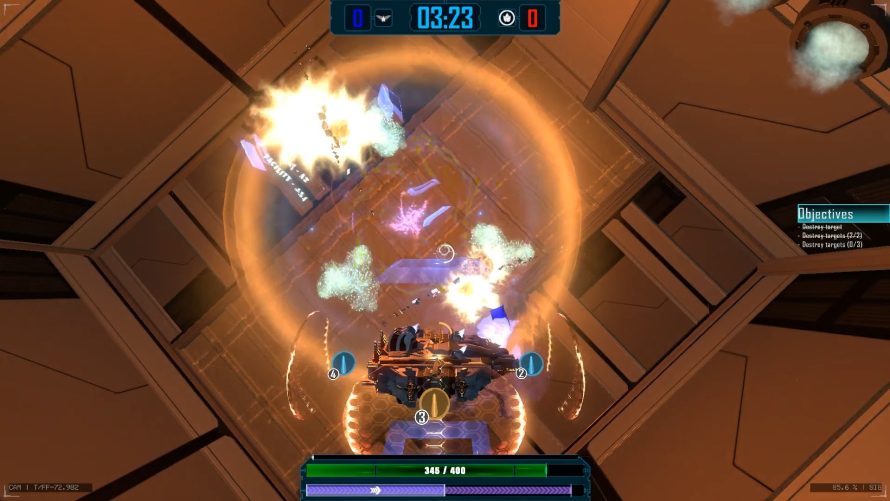 Omnidirectional combat is not a common thing in multiplayer shooters these days; even more so as most tend to focus around being, well, first-person… shooters. On the ground. With guns. As opposed to AS+CEND, which plays more like games of yesteryear – Descent, in particular – delivering combat with six degrees of freedom (translation: your avatar is a spaceship). Time for some fast and furious space duels!

Whether you’ll survive or get absolutely destroyed depends on how good you manage the offensive/defensive balance, prioritizing shields over weapons as the encounter changes, often with little time to react. Oh, and if one ship doesn’t fly to your liking, pick another. Plenty available, much like the weaponry. That said, you’d obviously do well to pick one and master it, instead of jumping between setups all the time, so keep that in mind while experimenting.

Keeping your shields up and oriented to your opponent is the key to survival. Yet securing victory will require risking exposure to launch your own devastating assaults.

While you’re at it, mixing and matching to find a ship frame/weapon combination, don’t forget about the abilities. Yup. Special abilities are also part of your arsenal in AS+CEND, although probably less so at this point in time, as it has only just launched in Early Access (and is currently limited to 1v1 dueling, either against other people or the AI). They are “working hard to bring even more tools of destruction to the table, including new weapons, abilities, and ship frames” however, 2v2 and even 3v3 skirmishes set to arrive… soon.