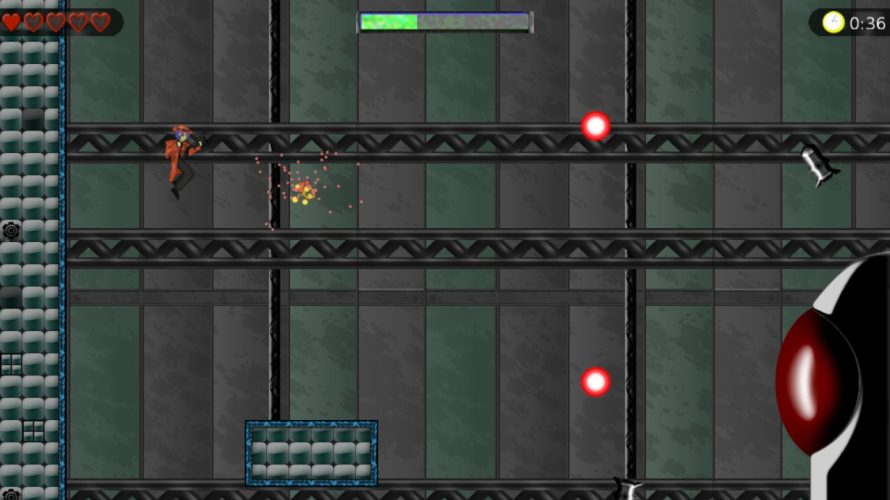 I downloaded the demo a while ago and was immediately intrigued. Not long after a sale happened so since I’m a budget-gamer, I picked it up then and there. But just what did I find in this 2D run-and-defy-gravity-with-a-gun platformer?

As I had already played the demo, I knew the controls were tight and responsive – a bit more with a keyboard than a 360 controller, but that could just be me imagining things, and I felt no advantage from a gamepad over keyboard anyway. 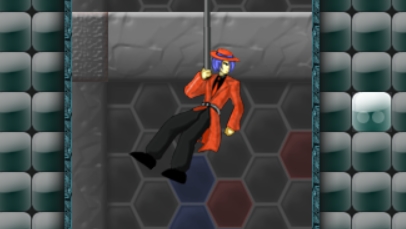 The game has a nice artstyle going for it, even if the character you control made some strange choices when getting dressed this morning. I mean.. orange clothes? Guess there’s no accounting for taste. If I was to wear orange, people would think me mad! Thankfully his taste in clothes does not transfer to the visuals of the game, as enemies show a good level of detail and backgrounds scroll with a neat 2.5D effect as you move through the levels.
One would do well to pay attention to what’s going on ahead more so than in the background however, because while most deaths are likely to come from the dangerous environment, the hostile robots found here will gladly put an end to your journey too. 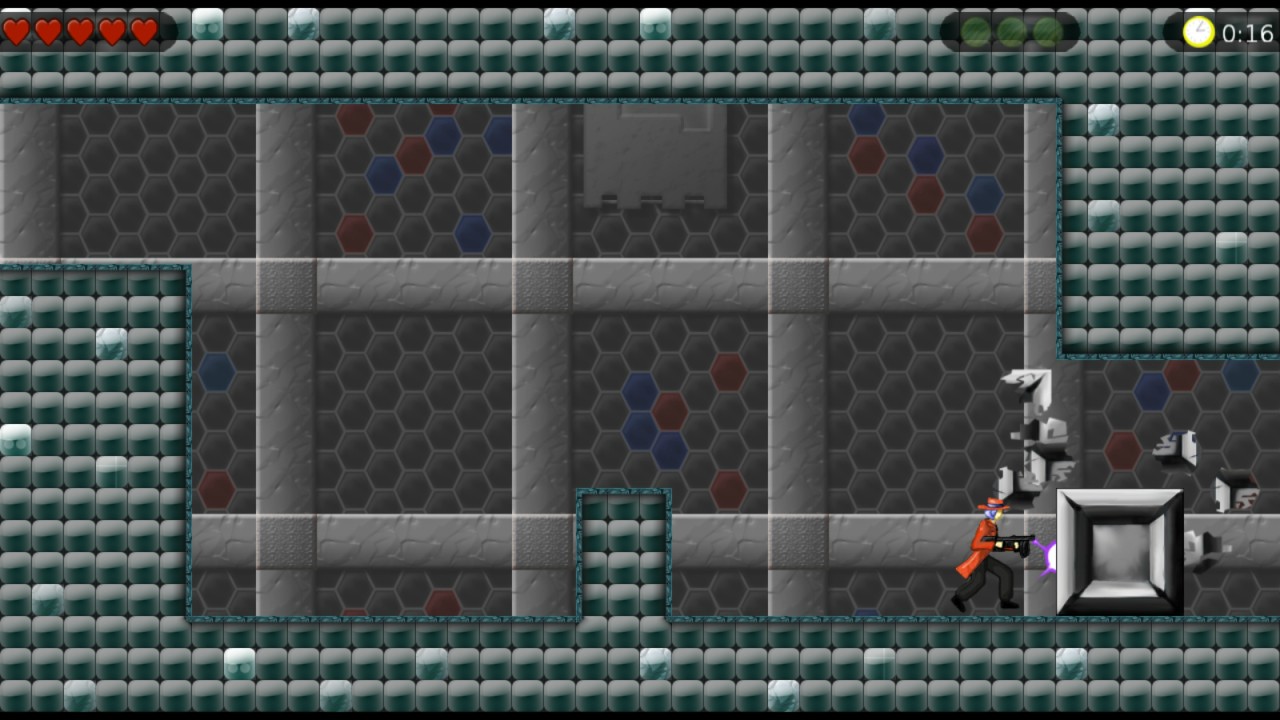 They say that the best defense is a good offense, and the gun at your disposal is more than capable of dealing with anything standing in your way, or you could be sneaky and make use of your other weapon (which is not really a weapon, but can certainly be used as such): The ability to control gravity! Nothing quite like levitating an enemy into one of many hazards in the environment..

This ability does come with a few limitations, obviously. You can’t simply flip gravity back and forth as you please, since it’s tied to a meter that drains with use and only refills while your feet are on solid ground. On top of that, its range is limited to a small area around your character, so you need to get up-close-and-personal to toss a robot onto spikes; doesn’t make it less fun, just mildly risky. 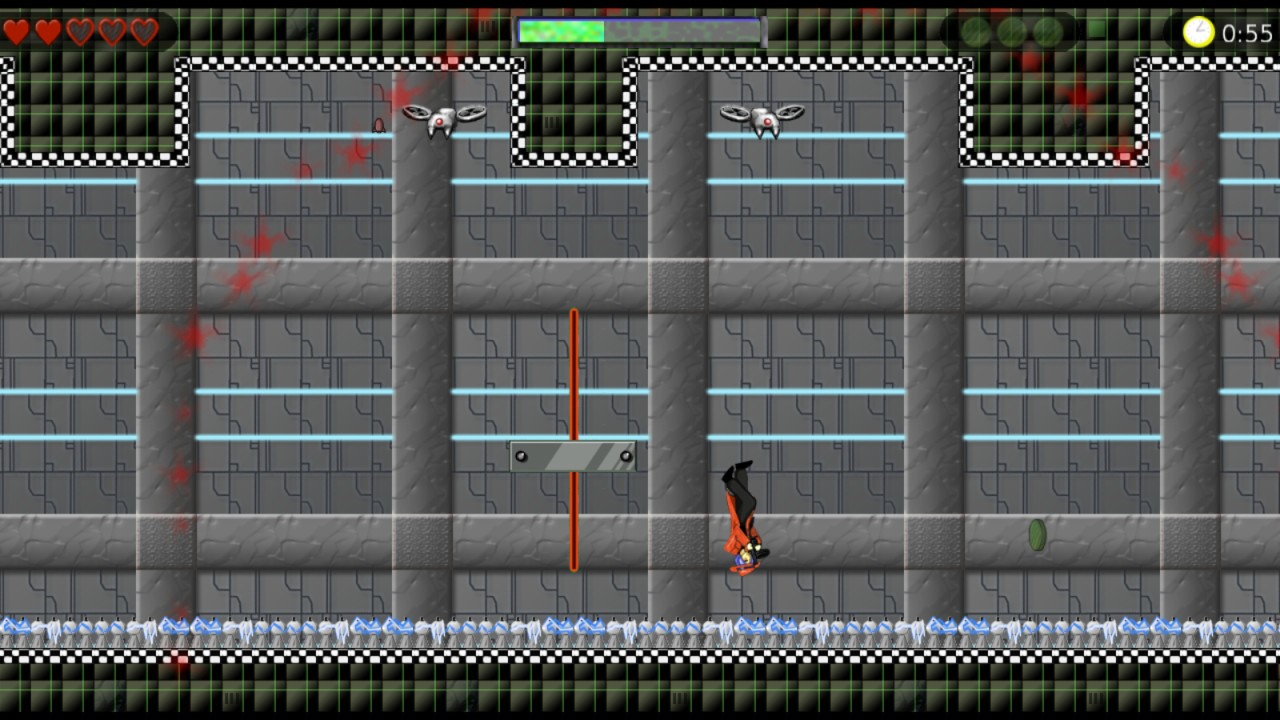 It’s a risk versus reward system, and I would not recommend messing around with gravity in combat if you are attempting to beat a level under par time, as it would obviously take longer than simply shooting the robot.
While there is no actual unlockables tied to speed-running, you are presented with a list of challenges (aka. achievements/trophies), one of which requires you to finish every level under par time. Again, no unlockables outside of bragging rights (but no leaderboards to show off on).

After finishing the main mode, going back for more is not a bad idea. It’s highly unlikely that you picked up all the coins spread throughout each level on your initial playthrough, and these actually do unlock something:
A set of challenge missions can be found in the main menu and each requires a certain amount of coins to unlock; completionists are going to have their hands full – especially since one of the challenges requires beating every single challenge mission below par time.. wow.

While playing through Antipole you would do well to tread carefully, because even with well-placed checkpoints, the game can be quite a challenge. I never found it downright frustrating; maybe because I played on normal instead of hard? But had I played on hard, I would likely be stuck in a level right now, instead of writing about the game.

Each level in the main mode provided a challenge that scaled as the game progressed, from “tutorial level” easy at first to “no way” near the end, but I still finished it and had fun (almost) the whole way through!
A few things did strike me as odd, including the complete lack of a story, though with this kind of game it would likely end up making little sense anyway. 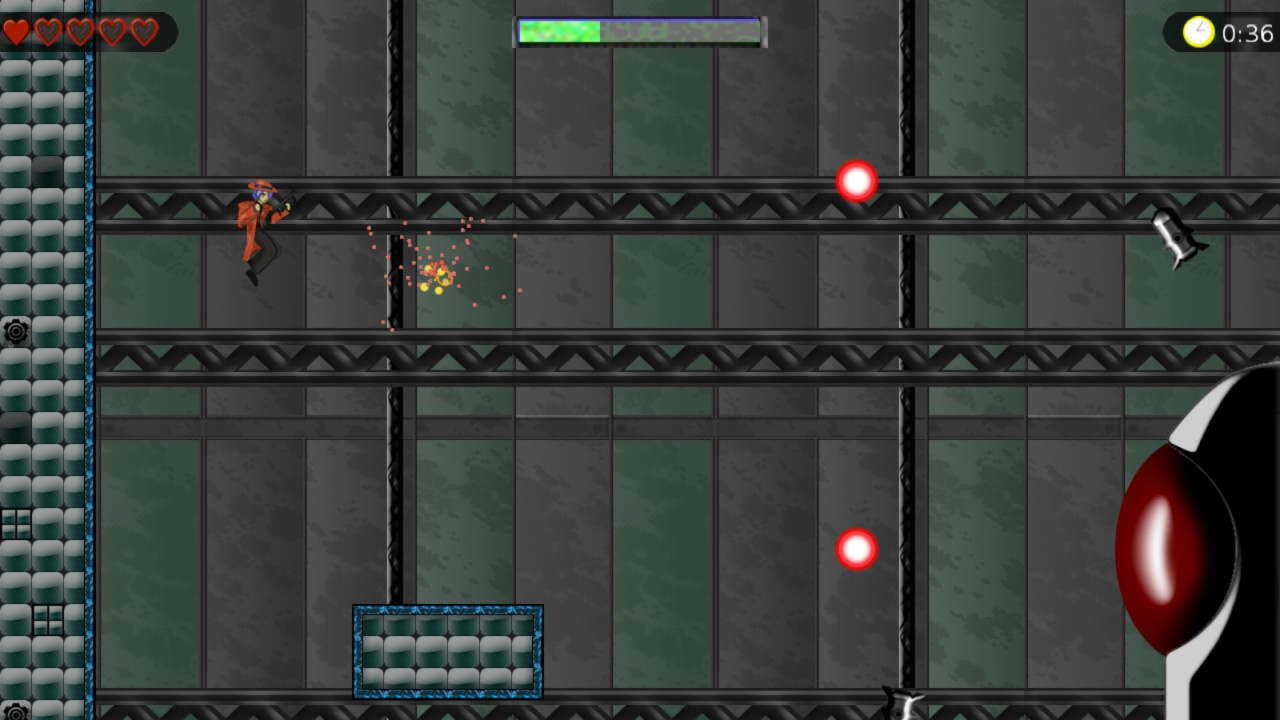 Oh and guess what else didn’t make much sense? The boss encounters. All but the last one seemed out-of-place somewhat.. and only one of them, was actually fun to fight.

I do not mean to make it sound like Antipole is a bad game, because frustrations and odd boss battles aside, it’s quite a fun little platformer, if a bit short. My initial playthrough clocked in at around 90 minutes – including retries – which is not a lot, but this kind of game is not really supposed to be 5+ hours long. If it was, I think the gameplay would make it repetitive more than fun; so I’d say it’s just the right length, and there are reasons to go back for more, as I’ve mentioned already.

Those who have been reading my blog for a while, may have noticed that this is in fact the third indie game I’ve written about, that has a heavy (get it?) focus on gravitational gameplay – the other two being VVVVVV and A Flippin’ Good Time.
What can I say? I like flying high, defying gravity..