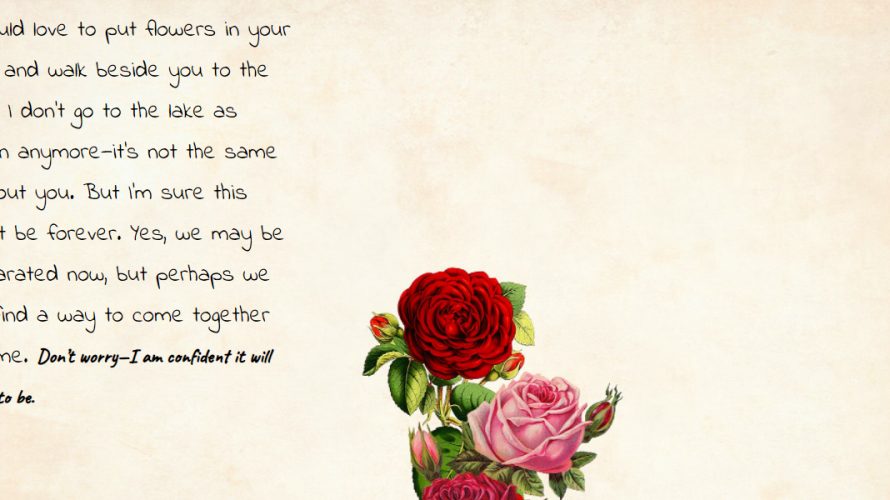 Being far away from a close friend by no choice of your own can be troublesome enough, but what happens when Anne & Juliet suddenly realize that what they feel about each other goes well beyond friendship? Something must be done to close the geographical gap then. Something. Anything! Fortunately, the distance does not prevent a frequent letter exchange between the two, and it is through these that their story unfolds.

In Anne & Juliet, we get to experience the story of two young girls as they come to terms with the fact that their longing for close togetherness is not just a desire for friendship any longer. It is a much, much brighter fire that has been lit between them, and over the course of a year, letters fly back and forth, Anne’s appearing on the right side of the screen, Juliet’s on the left. A clever setup that ensures the reader won’t lose track of who wrote the currently displayed letter.

Sure, they may have only been apart a month at the beginning of the exchange – which is the point where we first get to read along – but love doesn’t have to take ages to blossom. That and “absence makes the heart grow fonder”, as they say, which in this case certainly proved true as it was only after Juliet moved far away that Anne realized how she felt about her, at that point, dear friend. Fortunately, her mind was soon after put at ease with a reply confirming that Juliet’s heart also beats for Anne in that special way.

But that’s only the beginning of the story, and while I’d gladly share more, there isn’t enough for a more in-depth review as I will not spoil important tidbits. For those now wondering why I ‘spoiled’ all that stuff in the previous paragraph, I actually didn’t, as the following is quoted from the game’s page: “A love story between 2 young girls, told through their letters to each other over the course of one very special year.” Besides, gotta share something, ya know?

All that said, Anne & Juliet is a romantic tale best experienced with virtually no prior knowledge… and a genuinely endearing one at that, even if I did find myself wishing it had been longer. But such is not exactly uncommon for a well-written story. Just gotta enjoy it while it lasts.

Anne & Juliet is available on itch.io, for free.