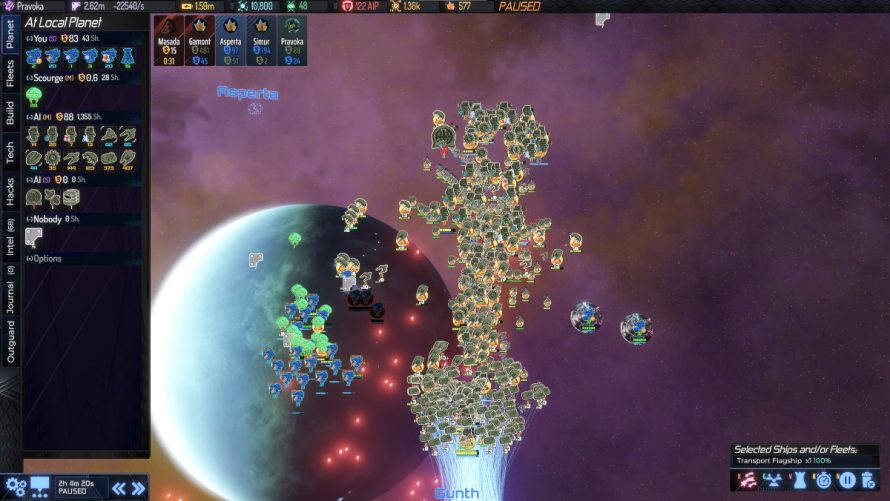 Much like AI War before it, AI War 2 is an ever-growing, ever-expanding strategic sci-fi affair. Around this time last year, The Spire Rises added The Scourge and The Fallen Spire to the game, alongside a handful of other goodies. Next on the menu? A bit of a surprise, quite frankly, as an alien race thought long gone will be joining the fray in Zenith Onslaught.

How? Why, from a neighboring universe, of course! Gotta love sci-fi games and their multiverse madness. No one is ever truly dead, just the version in our universe. Or some such. I mean, that’s exactly what’s happening with the Zenith in this expansion, and you better believe they’re not happy to find the only remains of their brethren being, well, the Golems – mindless automatons. Unsurprisingly, this means… WAR!

Multiverse theory has been around for hundreds of years, since back on Old Earth. It had never been tested.

That said, based on available details, it actually sounds like this particular lot isn’t super interested in the player. Not directly, anyway, as the Dark Zenith, Zenith Architrave, and Zenith Miner, all “have their own agendas independent of humanity”. Huh. Does that mean we’re not even a target, perhaps a potential ally in the war against that pesky AI? Yeah right. Oh, and making matters even worse, enabling the Dark Spire just might end up granting the Dark Zenith access to a powerful ally. Oh boy.

Terrified yet? I certainly am, at the prospect of dealing with all that – and yet, at the same time, genuinely excited. In no small part due to the other tidbits that art part of the Zenith Onslaught expansion: new ships, Outguard, and other groovy units. Or how about something from the first AI War, Nomad Planets, alongside 10 new devious AI types? War may be hell, but in video game form, it can also be absolutely thrilling, and AI War 2 still has at least one more trick up its sleeve with the yet-to-be-released The Neinzul Abyss expansion. Are you ready?

AI War 2: Zenith Onslaught will be available on Steam and Humble Store, come May 18, 2021.