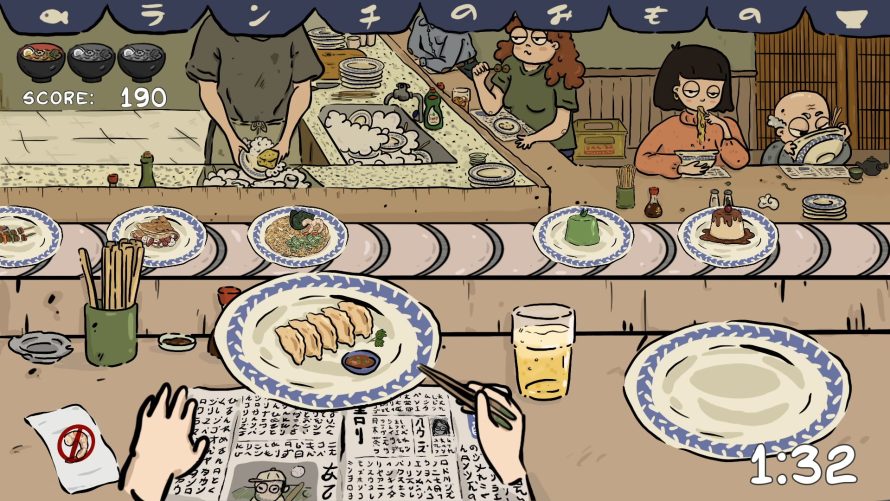 What do you do when it’s late, you’re nowhere near your own place, and you’re quite hungry? Make a dash for the nearest restaurant, of course! Although if you have food allergies, eh, confirm they have an allergen menu before getting ready to chow down at the buffet. Or do like our faceless, nameless protagonist, and just take a chance – if you’re willing to accept potential Buffet Drama.

Personally, I’d keep walking, growling stomach and all, but then there wouldn’t have been much of a game (also, not an option in Buffet Drama). So here we are, dishes moving across the conveyor belt, slowly at first, giving you ample time to select what goes into your mouth. Except, that bit about time was a genuine lie. You’re very much on a strict time limit here, only afforded 2 minutes and 30 seconds before the check arrives and you’re booted from the restaurant. At least that’s what I think happened.

All I saw once the clock had run out was a bill for yen equal to the score I’d managed to rack up. Which makes sense. Or does it? Isn’t the whole point of a buffet that they have a non-variable price tag? I don’t know. Maybe this is a special restaurant trying something new. Well, whatever the case, let’s dial it back a bit because due to the whole allergy thing, you can’t simply grab every dish that rolls by and expect it to go down without consequences. Oh, and in case you hadn’t picked up on that by now: hunger has made you forget what you’re allergic to.

If you eat too many dishes that contain the allergenic ingredient, you will regret it.

The only way to find out what to eat and what to avoid is to try as many things as possible and make mental notes as you go along. Don’t even think about trying to create a cheat sheet for future attempts either, because unless I am way off, allergies are randomly decided at the beginning of each two-and-half-minute session. Just like in real life, ya know? Right. Not really, but video games aren’t supposed to be realistic. They’re supposed to be entertaining, maybe educational, perhaps even thought-provoking. As far as Buffet Drama goes, I’d tag it as ‘entertaining’ with a duration that lends itself well to coffee break fun and not much more.

Buffet Drama is available for free on itch.io.