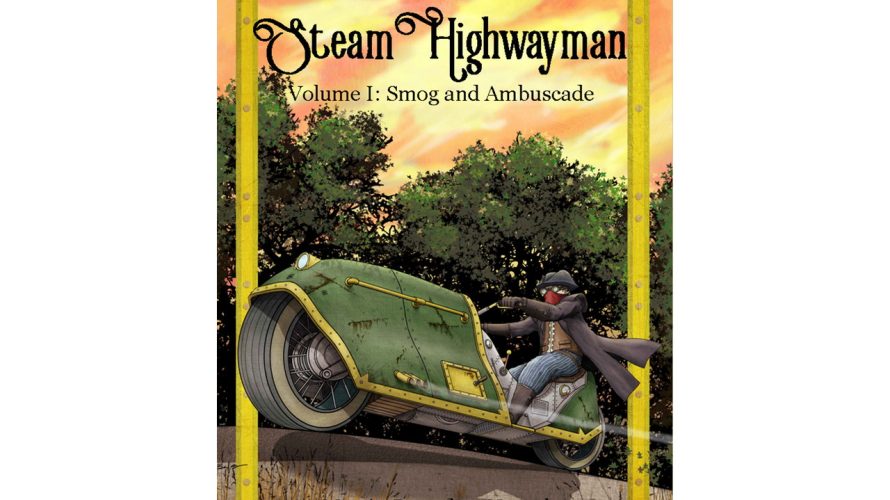 While this is far from the first article on my website about gamebooks, most have been about Fighting Fantasy, with the odd exception. Until recently, it seemed that trend would continue. But then Martin Barnabus Noutch revealed that Smog and Ambuscade, the first volume of his Steam Highwayman series, is scheduled for release on Android and iOS this summer, rekindling my hope for future gamebook video game adaptations.

Four years. Four years ago, Steam Highwayman: Smog and Ambuscade was successfully Kickstarted. Does that mean we’ve been waiting that long for a mobile version of the gamebook though, that Mr. Noutch has been trying to figure out how to best approach a digital version of his choose-your-own-adventure writings? I’m gonna go ahead and say ‘doubtful’, seeing how at the time of writing, Steam Highwayman III: The Reeking Metropolis has long since been crowdfunded and the book is complete. So… three volumes, four years – yeah, I highly doubt anything mobile for Steam Highwayman was on his mind from the get-go.

Not like that really matters though, because that’s certainly a thing now, and this summer, everyone will be able to experience the first installment of the Steam Highwayman series… on the go! Kinda like how the series’ protagonist is always off somewhere on his steam motorbike in an alternate 19th century England. Except, you know, without a mobile device. Speaking of which, aside from obvious changes, like eliminating the need for dice and pen and paper with which to experience Smog and Ambuscade, the app will also be “enlivened with new graphics and music”, meaning even those who have already exhausted every possible outcome in the original version are still bound to find something new. For most, however, I suspect the mobile benefit will be the main selling point, everything else just a lovely bonus.

In fact, wherever you have your phone, you’ll be able to rob the rich, give to the poor and steam off into the night!

Now, for those not familiar with Steam Highwayman, it is a choose-your-own-adventure/gamebook set in an alternate 19th century England, although unlike many other – Fighting Fantasy, for example – of a similar vein, this particular series does things a bit differently with how the journey is laid out before the player. Not only is there no fixed story or one single, linear quest to complete, but the six(!) books that will eventually make up Steam Highwayman are also interlinked, with a big open world freely explorable, sprawling with opportunities for adventure and excitement. Lots to see and do in Steam Highwayman: Smog and Ambuscade, and while I do prefer the colder seasons, this announcement still makes me hopeful that summer isn’t overly far off. Fingers crossed.