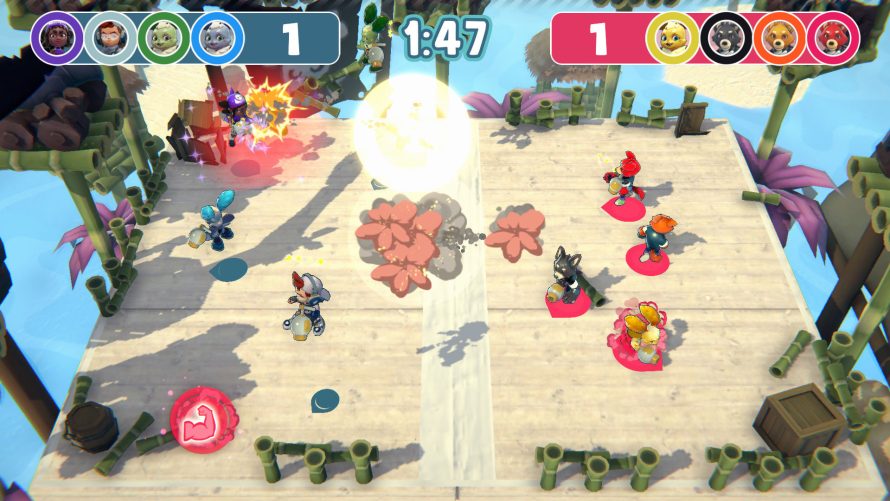 Explosive dodgeball! Soccer with a ball that’s sometimes a puck! Blow-everyone-else-off-the-island! What? Oh, those are just some of the chaotic party games that make up Aeolis Tournament, and… they’re all played with just one button. Including soccer. Did I mention how its take on that sport actually has you blowing air at the ball rather than kicking it? Absolutely brilliant.

Its easy-to-learn-AND-master control scheme and unique takes on classic party games/sports might make some think this is just a basic party game. It really isn’t. Even the brief slice featured in the demo (available during the Steam Game Festival, Summer Edition last month) made it pretty clear that while madness and mayhem may reign supreme at first glance, those with skill and a bit more know-how than everyone else most certainly has an advantage. Probably not a big one, but an advantage nonetheless, and I’d wager this is emphasized further in a team game where co-operation is absolutely vital. If winning is your objective, of course. Some do play games like this for fun instead of caring about silly things like tactics and mastery of every single feature, and… well, might as well admit, I’m with them. This is probably a huge part of why that Aeolis Tournament demo was just so much darn fun!

But enough about a demo that’s no longer available. The full version is available and if nothing else, they definitely did their best to ensure matches were always both varied and customized, so many tweakable variables. There is one tiny potential problem with this, however: much like character skins, an additional game mode, and just about everything else not available from the get-go, game customization settings are unlocked using currency earned by completing in-game achievements. Do keep in mind that I am simply going off the details available on the Steam page here, and as such, I have no knowledge of how grindy this aspect actually is. On top of that, chances are the game is just so much fun that few are even going to care that they have to work to unlock additional features (again, going off my brief time spent with the demo).

Storm with thunder strikes, mudslides, lava geysers, falling meteors, air-dropping crates and blizzards will spice up gameplay and ensure that every game is different.

Aside from that, it does all sound like a recipe for a genuinely good time, online and local multiplayer readily available – heck, there’s even bot support, and let me tell ya, this lot does not mess around! Ah, and that air cannon your character’s always holding onto for dear life? Yeah, it has a ton of uses: push opponents around, grab, hold, even throw an item in someone’s face, let loose a gust of wind to navigate slippery terrain, and so much more. But like I said, everyone gets one, so in that regard, it’s a pretty even playing field. Power-ups, on the other hand – now these temporary boosts just might net you the victory, or at the very least, help prevent defeat, if used properly… along with the destructible decor.

So… who’s ready to party? The Aeolis Tournament awaits!

Aeolis Tournament is available on Steam ($14.99) while the Switch version will be out on July 23.

Aeolis Tournament - Release Trailer
Facebook Twitter LinkedIn Pinterest Tumblr WhatsApp Telegram E-mail
Previous article Seafaring in 'Don't Starve Together: Return of Them' Certainly Got More Hazardous After the 'Troubled Waters' Update
Next article Ancestral Roguelite Shenanigans Will Have to Wait: 'Rogue Legacy 2' Has Been Ever so Slightly Delayed