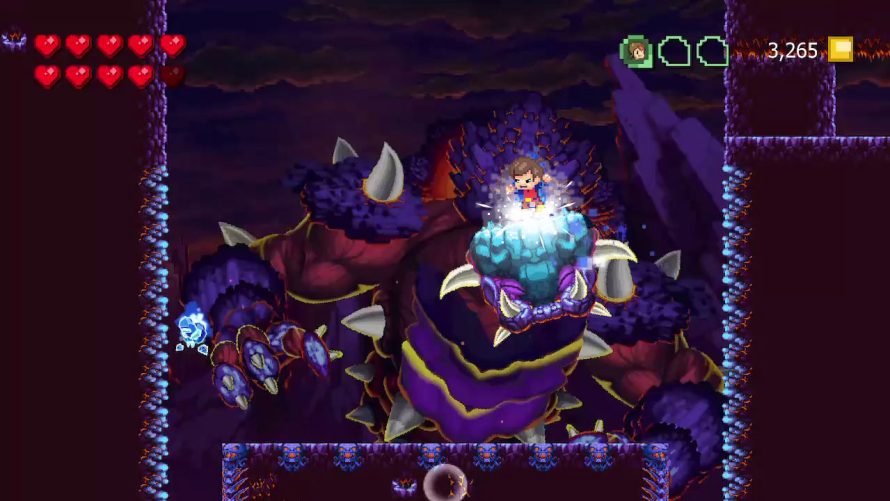 While undeniably drenched in nostalgia, Adventures of Pip does go further than other genuinely old-school outings in recent years. When was the last time you played a 1-bit game, after all? No, I am not crazy. That’s totally a thing for the protagonist in this particular platformer, as it is one of his three… forms.

Confused? Don’t worry, it’s actually pretty simple: 1-bit Pip is able to jump further and squeeze through tight spaces as he’s absolutely tiny, 8-bit Pip is the more “acrobatically-inclined” form, able to punch, kick and bounce all over the place, while 16-bit Pip… if you need raw power, this is where it’s at! Sword and mass, 16-bit Pip brings the pain to those poor souls who stand between him and beating the crap out of Queen DeRezzia to save Pixelonia’s pixels and princess. Also, in case you’re still wondering how he’s able to shift between the three forms: he’s “a prophesied hero able to connect with the Bitstream”. Yeah.

There’s never been a better time to save Pixelonia!

Alas, hero business is serious stuff, and without new abilities and consumables there’s no way Pip will be able to dance with those wicked screen-filling bosses and live to tell the tale, or heck, survive the rest of the journey! Seeing how the only way to get these is by rescuing wayward residents, well, guess there’s more than simply you-know-what kicking in the stars for this bit-shifting hero, whether he likes it or not. At least this upcoming Switch port will be getting a handful of quality-of-life improvements to help make everything easier, which I’m sure players are going to appreciate: “access the Town quicker with a shortcut on the map, auto-collect dropped gems, and travel more quickly as 16-bit Pip”. Also, achievements, because why not?

Adventures of Pip will be on Switch come September 10, carrying a $9.99 price tag.