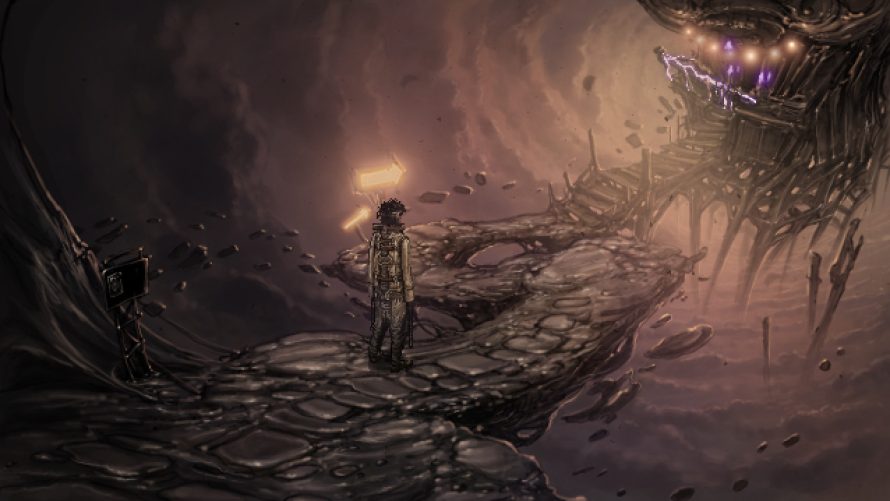 Waking up in an unfamiliar locale with no recollection of how you got here – or even who you are – can be downright daunting. Alas, that is how Strangeland begins and amnesia is not even your biggest problem in this followup to Primordia. Nightmarish landscapes are inhabited by monsters from the darkest corners of horror, and the solution to this massive puzzle… requires you to make sense of its madness. If that’s even possible.

That said, the path to Strangeland‘s credits is actually a rather simple one: destroy the Dark Thing. Simple enough. Except it never is in point ‘n click adventures such as this, something further hinted at by a non-linear, almost Quest for Glory-ish approach, puzzles having more than one solution, and I believe these also alter your path through the story. Could be mistaken on that last bit, but according to Wormwood Studios, “Strangeland lets you pick your own way, your own approach, and your own meaning”, and there it is: “your own way”. Multiple endings are also going to be a thing, which is pretty darn rare – but certainly a welcome feature – in this genre.

You seek clues and help from jeering ravens, an eyeless scribe, a living furnace, a mismade mermaid, and many more who dwell within the park.

Speaking of the genre as a whole: “punitive aspects of adventure games” should all be but a bad memory come launch. What this means in plain English is that fail states will not be a thing, as the protagonist can not die or get stuck because a specific item wasn’t acquired from a now-sealed-off area. Hair-pulling classics like moon logic and backtracking are also getting the boot – or put differently, mistakes that plagued Sierra classics shall not make an appearance here.

I don’t know about you, but I can’t wait to set foot in Strangeland (been waiting since early 2018, actually) and watch as its twisted world – in beautifully pixellated 640x360 – come to life before my very eyes, one surprise after another.

Strangeland will be available on Steam, “In the fullness of time”.

Strangeland Teaser Trailer
Facebook Twitter LinkedIn Pinterest Tumblr WhatsApp Telegram E-mail
Previous article From 1-bit to 8-bit and even 16-bit: 'Adventures of Pip' Heading for Switch With a Handful of Improvements
Next article At a Glance: Nintendo’s Indie World Showcase (8.18.2020)