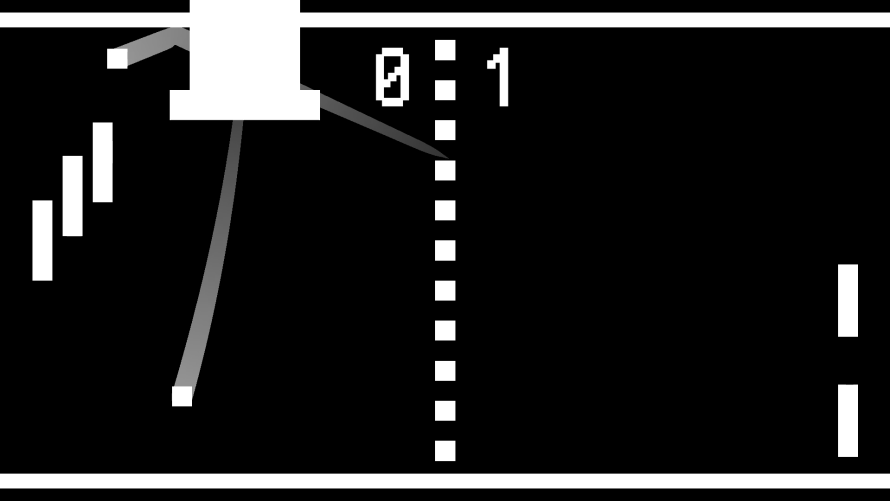 First I beat Noob, then Fat Boy, Scifi, Speedy, Trio, and eventually, Ninja. General had me stumped, however. I thought I was good at Pong, and maybe I am… but ya better believe Absurd Pong takes it to the next level: rockets, laser guns, extra paddles, extra balls, invisible paddles, invisible balls – it’s crazy! Crazy! Completely bonkers! Or perhaps just a bit… absurd?

Whatever the case, Absurd Pong is an absolute blast, on top of likely being the craziest and most varied take on the video game classic yet. Sure, it’s just regular Pong at first, but once you beat Noob and start racking up victories against the other 15(!) opponents, each with their own unique additions, things really take off. My favorite of the ‘characters’ I unlocked was definitely Twins, which gave me two paddles… which unfortunately had a gap between them. A gap which several balls flew right through, costing me more than a few points until I adapted to the different style of play. What a trip.

That’s only the beginning too, and at some point, I do plan on defeating General to find out what else lies ahead in terms of unlocks and unique adversaries. Maybe even give the local multiplayer a go, either versus or co-op. Unfortunately, at the time of writing, that part of Absurd Pong remains a mystery for me, although as with defeating General – sooner rather than later, hopefully. According to the developer, dual machine guns are also a thing… somewhere… in a future unlock, I’m sure. We’ll see. For now, I’d highly recommend giving this one a go. It’s free after all, and hey, what’s not to like about Pong with a twist of absurdity?

Absurd Pong is available on itch.io, for free.