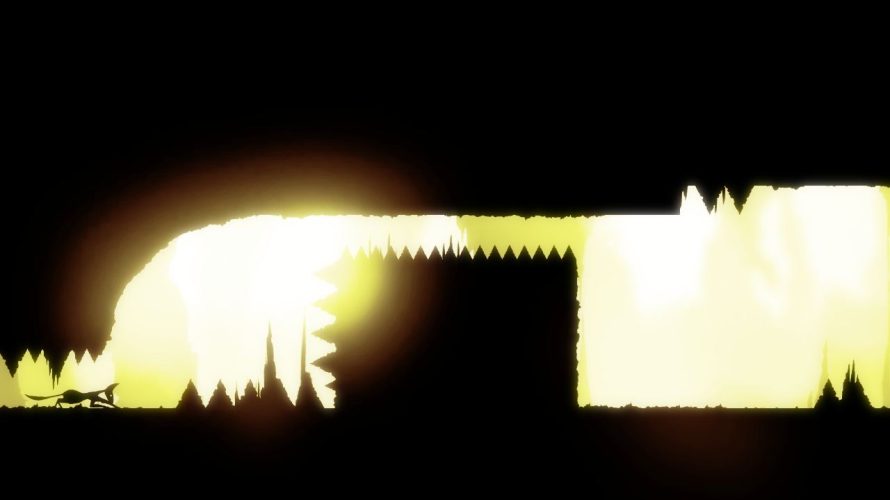 Wow. It feels like forever since I wrote about A Walk in the Dark‘s gameplay trailer, even though it has only been three months, but now it’s finally out! Comparisons to games like LIMBO and Super Meat Boy have been made wherever said trailer popped up, but this challenging 2D platformer certainly comes with a twist of its own: How does playing as a cat capable of defying gravity sound?

As the game begins, Arielle and her cat, Bast, are enjoying a nice and quiet afternoon in the forest. But let’s not forget that cats are curious by nature, and in this case curiosity just might end up killing the cat, or at least end up getting its owner kidnapped by a strange spirit (that’s what you get for running off!). Bast, now all alone in a dark and dangerous forest, decides to chase the spirit, hoping to save Arielle before it’s too late…

Plenty of spikes, buzzsaws, and hostile creatures stand between you and poor Arielle, but if you’re up for the challenge – and feel like playing as a feline for once, A Walk in the Dark can be purchased from the official website for €5/$6.50/£4, along with its soundtrack; no demo. They are also trying their luck with Steam Greenlight, so be sure to check that out, eh?

A Walk in the Dark - Launch Trailer
Facebook Twitter LinkedIn Pinterest Tumblr WhatsApp Telegram E-mail
Previous article 'Bleed' Released With Plenty of 16-bit Action-Packed Gunplay
Next article Through the Fire and the Flames: 'Party of Sin' Is Out