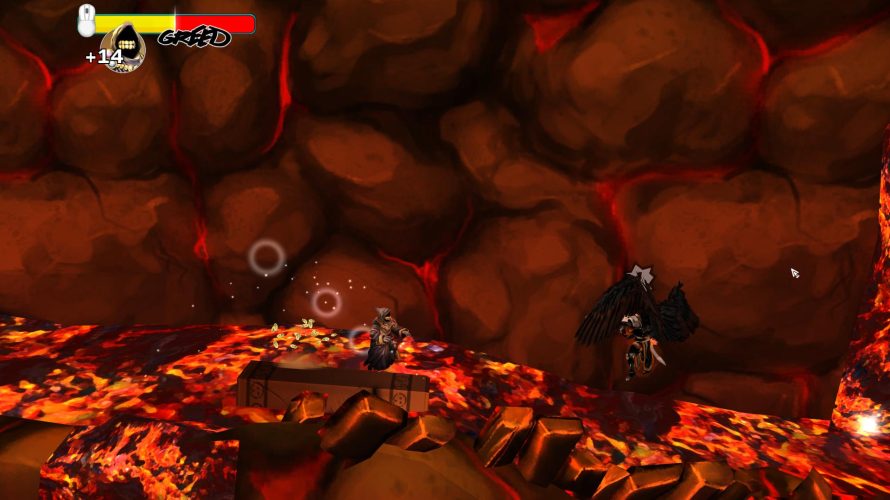 Wow! This looks like my kind of party: The Seven Deadly Sins have been imprisoned by the angels. Why? Irrelevant. What matters is that you now get to pull off one Hell-of-a jailbreak. And since it’s dangerous to go alone – we’re talking about Hell after all – you have the option of bringing along a friend or two or three. No one locks up Envy, Greed, Wrath or the other sins and gets away with it, so make your way through the fire and brimstone and get ready to enact glorious vengeance upon the heavens!

Party of Sin mixes 2D platforming with so much combat and puzzle solving that you’ll have to utilize the unique ability of every single last sin to get through it in one piece. Fortunately, switching between between them is done instantly, in tried-and-true Trine style, but since only one person can play as a specific sin at a time, communication and coordination is key – especially when solving those puzzles. In case one of your co-op buddies are being lazy and/or not helping the team, feel free to smite him/her with your powers; there’s no ‘I’ in ‘team’ after all.

In an attempt at giving each sin some background, Crankshaft Games have written a small ‘bio’ for them all on the blog. Up for beating the crap out of some angels? Party of Sin can be picked up from either Desura or Steam for $15, the latter of which comes with 33 achievements and a few other fancy Steam exclusive features.