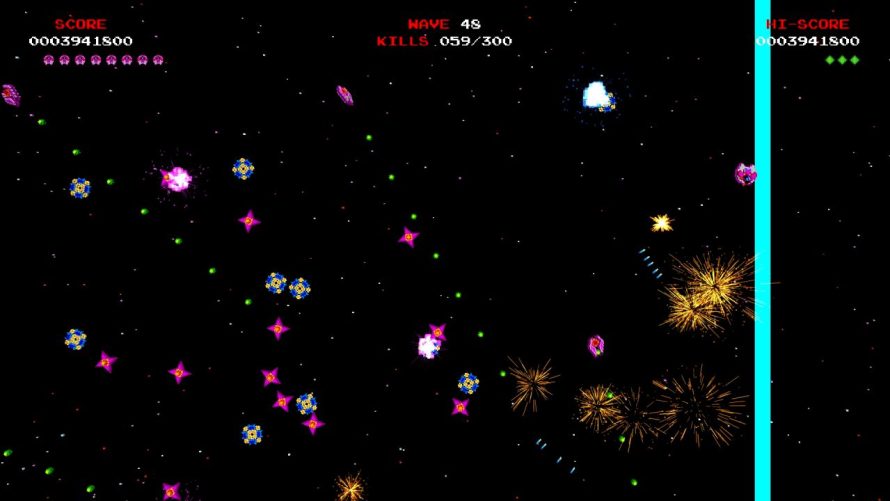 It wasn’t immediately obvious as my enemies would explode for the longest time, having barely entered my line of sight. In fact, this one-sided battle went on for quite some time, but then it dawned on me: I was up against impossible odds. One tiny ship, taking on a seemingly infinite supply of hostile… things. Needless to say, I was overwhelmed eventually, but rest assured, I went down fighting!

Now, I know what you’re thinking, and you’re right: I pretty much just described your average arena-based twin-stick shooter, with very few exceptions. You move, point, fire and survive for as long as possible. Some, like 99 Waves to Die, does come with nifty features such as screen-clearing bombs and/or weapon upgrades, though.

That’s also pretty much all it has, unfortunately: a panic button (bombs) and pick-ups that extend your arsenal in some way. Well, that and a strange wave based setup for progression, culminating after the 99th. Suffice to say, I did not make it that far. Not even remotely, as my supply of ships ran out during the 49th, courtesy of a downright unfair respawn system.

See, blasting enemies left and right is easy at first, waves flying by one after another, during which most will likely think to themselves that the game is almost boringly simple. Even the new enemy types that join the fray every ten or so levels, including ones that’ll even return fire and chase you down, don’t pose much of a challenge. 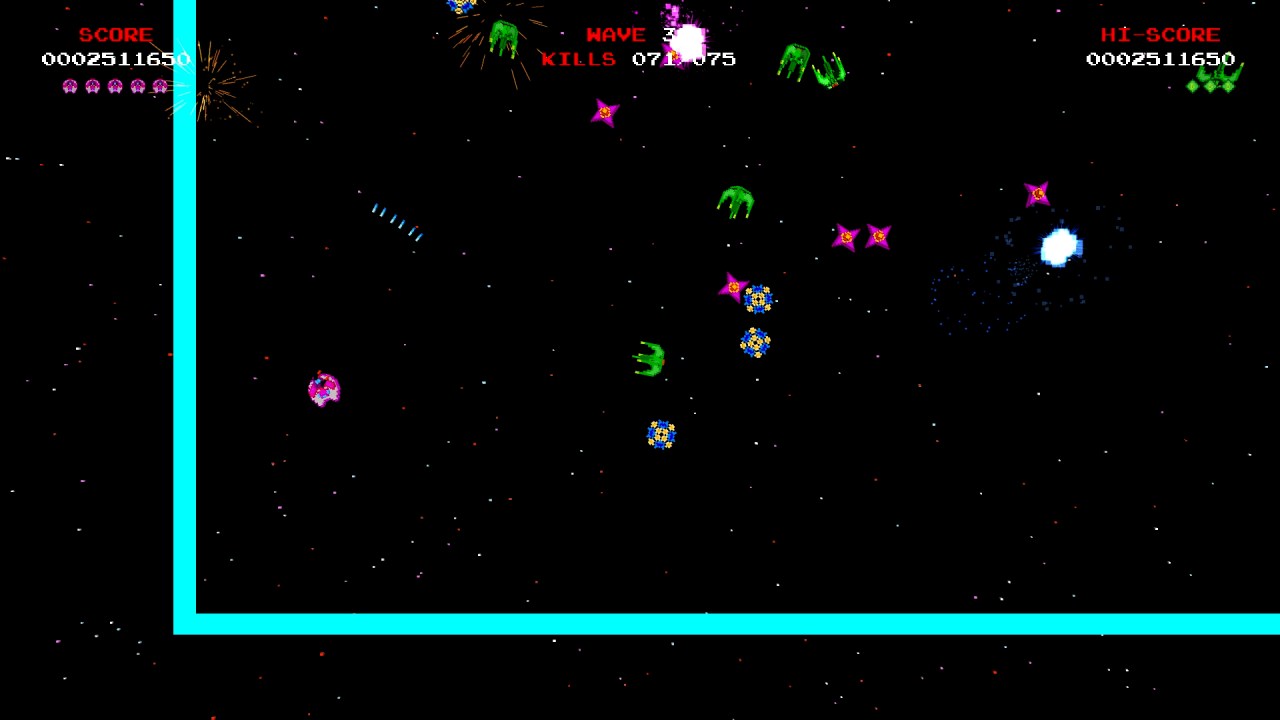 Especially since they lurk in the shadows until wave 41, which can take a while to get to. Although at the same time, this was also when the difficulty seemingly spiked; or rather, it was there that I started actually losing lives faster than I could replenish them, in any case. This also made me realize just how screwed you are, depending on how crowded the screen is upon dying. Few enemies? No problem. Little to no room to maneuver? Good luck with that, because you’ll be respawning smack in the middle of the lot, every single time.

You do get a brief moment of invincibility though, but honestly, it really isn’t enough. There’s a reason as to why most twin-stick shooters clear the screen when you die, and that’s to avoid this exact scenario. Oh, and each death also takes away a weapon upgrade, meaning that a ‘death chain’ – which is hardly a rare occurrence post wave 40 – is going to leave you in quite bad shape.

Remember when video games used to be insanely difficult? When you used to spend $’s in the local arcade trying to get the high score? When having your three letter initials/acronym at the top of the table meant you were the king? Well we do, and that is why we have created 99 Waves to Die.

All in all, recommending 99 Waves to Die is nigh impossible, taking the aforementioned issues into account. With irky respawning, a lack of interesting features (just bombs and weapon upgrades), the overall experience is just much too repetitive and dull. On top of that, there’s only one mode, in which the first chunk is much too easy, whereafter the difficulty climbs so high that most will be unable to adapt quickly enough, to soon be greeted by massive red letters, spelling out GAME OVER. Game over indeed.

99 Waves to Die is available for $2.99 (Windows, Linux) from Desura, IndieGameStand, and Steam.