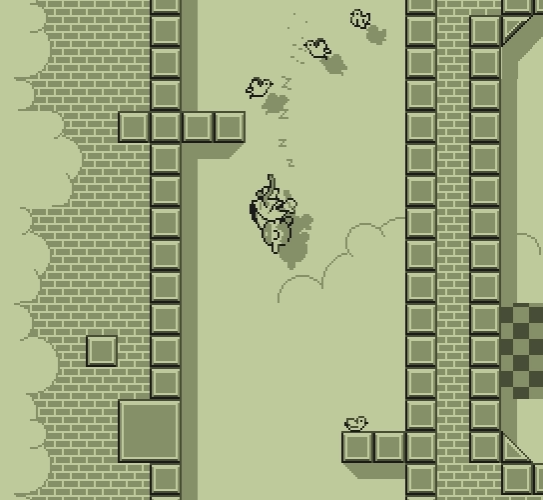 Just to set the record straight, 8bit Doves is not another Flappy Bird clone. For starters, you can fly in circles, rather than just up or down, and instead of being score-based, there are actual levels to beat. It’s anything but easy though, as the physics engine is almost too fond of dragging you down… towards a level ending crash. Oh, and there are doves to collect as well, because, birds!

To control Tweety, which is what I’ll be calling the protagonist throughout this article, you have to press either the left or right arrow key, which makes him steer in that direction. For some reason, he never stops flying, nor does he slow down – not even when he’s heading straight for a wall. Definitely didn’t hatch from the brightest egg, this one. Or maybe that groovy looking GameBoy-ish color palette is distracting him?

Throughout each of the eight levels, there are tiny doves which gladly follow you around, although aside from making up your ‘rating’ after beating the game, they serve no practical purpose. Also, you’re welcome to simply race towards the exit, as it’s open from the get-go. Completionists will want to gather ever the last dove though, going for that lovely ‘100%’.

That said, I’m fairly certain most would be satisfied, were they to finish every level, though, not including the added challenge from an optional collect-a-thon. In fact, why don’t you flap your browser wings towards 8bit Doves, see how far you can get… while ‘picking up’ every dove along the way? Oh and don’t forget about the other Nitrome Jam 2014 creations while you’re at it!