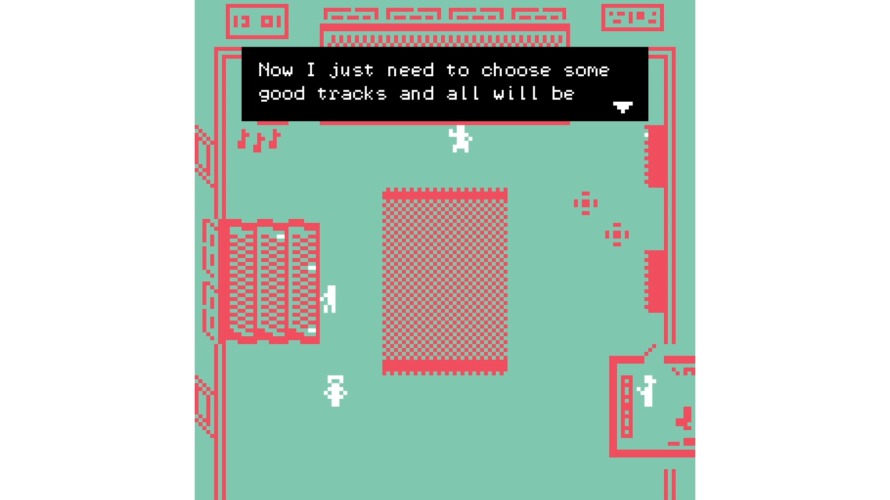 Welcome to the late 1990s. 1998 to be exact, or so I’m guessing based on the name of the game and the music featured within. Music which you’ve been tasked to sort through and create a mixtape for… a… uh, very special friend. Just a friend. JUST a friend. Or so the nervous young girl playing the part of 1998‘s protagonist claims. Repeatedly.

So how does one go about creating a mixtape in a game with, as the above screenshot shows, an art style very reminiscent of the year in which it supposedly takes place? Simple: by browsing the available selection! I mean, how else are you going to know what song(s) to include? Oh right. Actually making the tape. Ah, you’ll just have to play for yourself to find the answer to that one.

For better or worse, the songs portrayed here are clearly straight out of 1998, and I’m sure even those too young to have experienced the late 1990s will recognize at least a few. Whether they are tunes in permanent rotation on whatever streaming platform you use or ones avoided like an awkward family gathering… well, music is subjective, and that’s really all I have to say about it. Okay, that and I totally agree with the ‘no.’ statement regarding a certain track. You’ll see.

Anyway, I’d strongly recommend making sure you don’t miss a single tape as every last one pops up a slice of internal monologuing, our poor protagonist doing her best at figuring out what’s what; and not just regarding the potential mixtape contents either. As someone who was, let’s just say a ‘young adult’, during the late 1990s, this kind of thing is more than a little nostalgic for me, which undeniably made the experience even better.

Even if none of this applies to you – perhaps you don’t like music at all, which is quite alright – I’d still recommend pointing your favorite browser towards 1998 on itch.io to experience making a mixtape… for a very special friend.