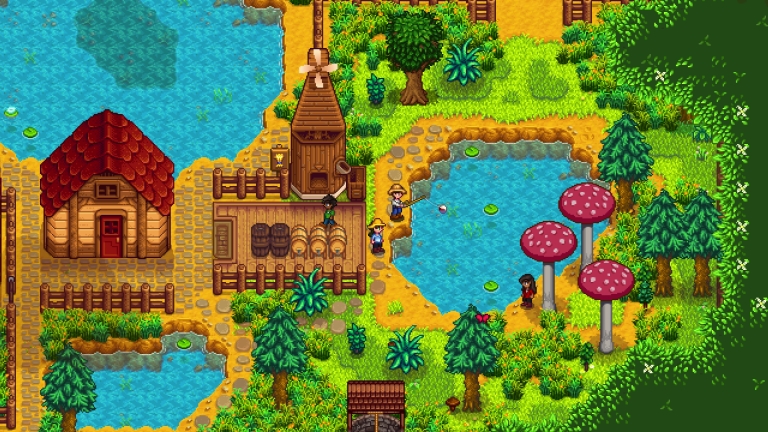 What’s better than a lone farmer making a living off the land in Stardew Valley, going on adventures, taking in the sights, delving deeply and greedily into the mines, and many other things? FOUR players picking up a hoe, axe, watering can or any of the game’s other tools to then do all that… in the same game! Oh, and it’ll be possible in the Switch version, from tomorrow.

Unfortunately, those expecting couch co-op are in for a bit of a disappointment, seeing how… well, that’s not part of the update (or even planned, far as I’m aware). That’s not to say that the Switch version of Stardew Valley‘s 1.3 update doesn’t bring some genuinely great stuff with it though, as not only will up to four people be able to play together online – and it doesn’t even have to be in a new save – “local communications play” is also possible – with enough Switch consoles, that is.

Each player will have their own Cabin on the farm, and you’ll be able to work together to achieve common goals such as farming, mining, fishing, foraging and festival participation!

There’s more to Stardew Valley 1.3 than teamwork though, as a slew of new content spread throughout the world itself is also included – including ‘horse armor’ (kinda). Also, did I mention how players can get married in multiplayer sessions? Yup. That’s a thing, and one that’ll undeniably make for some interesting stories both on and outside the farm, as time passes.

I’m definitely looking forward to this update, much like the many other Switch farmboys (and girls) also are, without a doubt. But… are you?