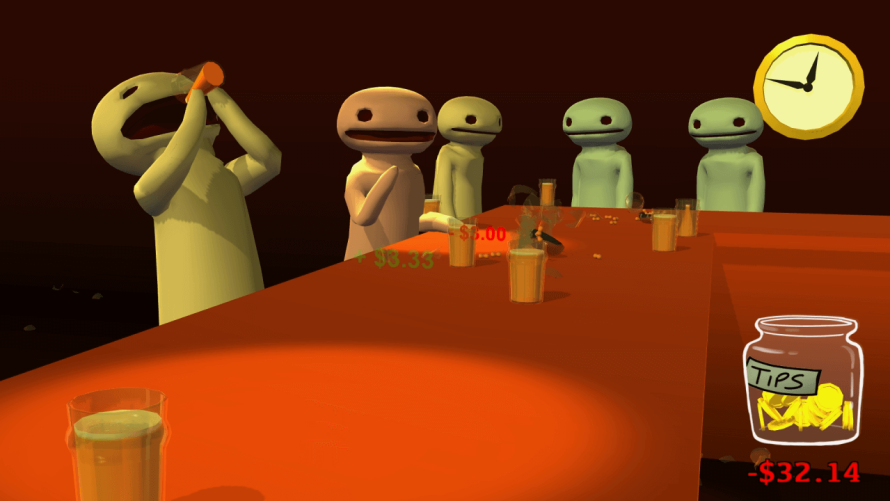 Ah, the ancient art of sliding bevs across the table, more often than not resulting in the quenched thirst of a pub-goer. That’s also exactly what you’ll be doing in SpillTender, flinging one pint after another to identical-looking characters. Be sure to wait until one shows interest in another though, or you won’t get paid. An easy gig? Yeah, if only.

At the beginning of your shift, everything’s nice and simple: a relatively clean table, cluttered only by a few peanut bowls, three people to serve. Beer is served by clicking and moving your mouse, making a throwing gesture, as it were. Simple enough to grasp, yet surprisingly challenging at the same time, since physics do come into play. Oh and spilled drinks / smashed glasses come out of your tip jar, so watch where you fling those mugs.

As the evening progresses, you’ll have more to deal with more. Of everything. More thirsty customers, more peanuts and other… obstacles. Unless you do really well that is. Spoiler: I never did. Even after getting used to first-person bartending, I was barely able to make a profit, wrapping up my best effort with a meager $1.72. That was with 9 beers served, a 38% overall accuracy, 10 broken glasses, and… a bunch of other fun stats. Because the game actually gives you a post-shift summary, either really rubbing it in, or enabling the creation of an awesome screenshot (if you did really well). Not bad.

All in all, while a rather simplistic experience, SpillTender is actually surprisingly well-crafted. It also doesn’t really punish you for going nuts, smashing everything, completely ignoring customers and so on. Unless of course, you’re playing to set a high score (local leaderboard only though), in which case you may want to pay attention to who needs another beer, and ensure that it actually reaches them. For some reason, each individual is only thirsty for a very limited time, after all, so on top of everything else, there’s also that to deal with. First-person bartending – gotta love it (unless you’re trying to to make a living…).