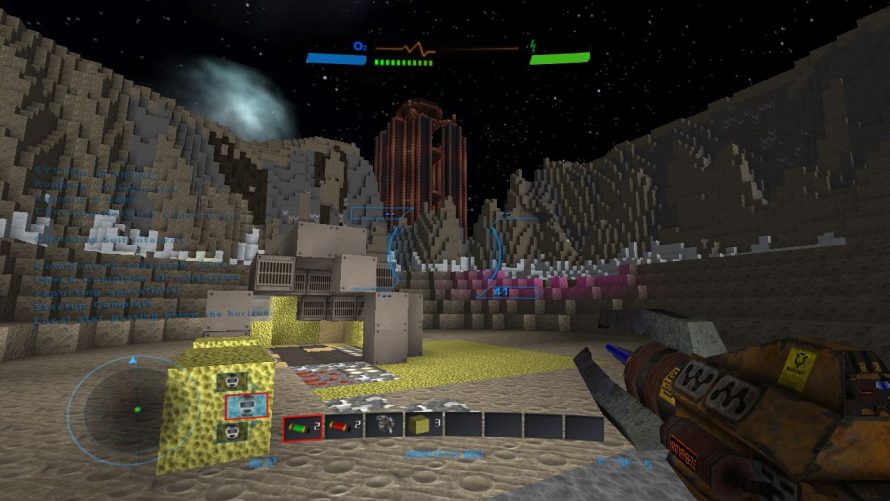 At first glance, Xenominer might seem like a simple Minecraft clone, but believe me, the two have little in common. What makes it so different, is its focus on sci-fi and science, instead of the overused fantasy realm. Time to boldly go where no man has gone before!

My original coverage of Xenominer is over a year old now, which means it’s quite outdated in terms of content. Mobs, FOV improvements, weapons, a ‘peaceful’ mode and much more has been added/changed since launch, fleshing out the experience significantly. As for what else has changed, you’ll have to resort to the Gristmill Studios website; there’s simply too much to list. That and this is primarily about the multiplayer addition. Xbox Live Indie Games version got this feature back in April, and now PC fans can also explore Xenos with friends! Good stuff.

Now it’s time to either start a game (and then host it, same as in Xbox, Multiplayer Beta > Launch) or Join Game, at which point you’ll need to enter a Game Name and an IP address. This should be the outward facing IP address of the person who is serving the game. This is not a 192.168.x.x number.

What this means in plain English is that you’ll have to connect to a server, even for single player (just use 127.0.0.1 – aka. your own computer – for solo adventures). Although, where’s the fun in that? Surely strapping on a pair of gravity boots and/or going jetpacking across the planet with other people is a much more exciting prospect! Just remember to monitor your oxygen level, and… keep an eye on the minimap/radar (unless you’re playing on peaceful). Trust me.

Those interested in space mining would do well to pick up Xenominer for either Xbox 360 from Xbox Live Indie Games, or the Windows port from the official website or Desura. Live long and prosper.