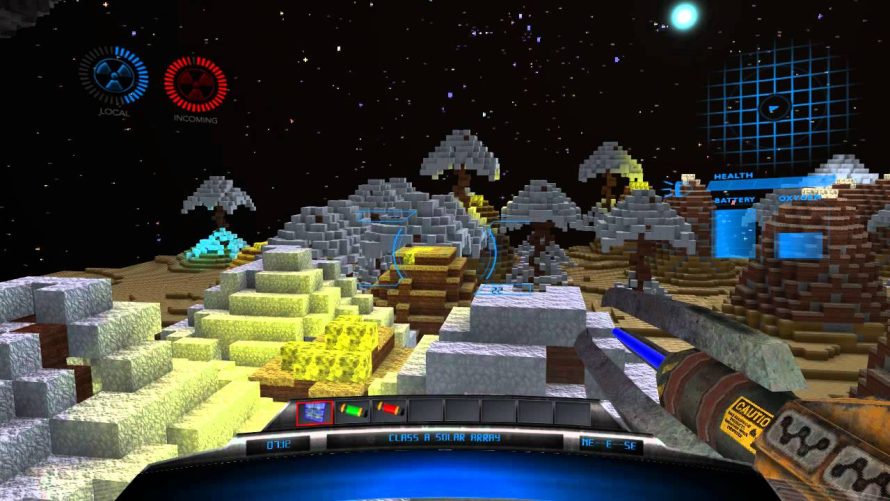 After crash landing on Xenos with only a handful of batteries and oxygen tanks intact, you have no choice but to explore this new unknown world in search of resources to ensure your survival, and with this much terrain to cover, who knows what you might find? This could lead to amazing discoveries, or if you’re not careful your untimely demise.

It might seem like Minecraft in space at first glance, but the only genuine comparison one can really make is that they’re both block-building sandbox titles, and Xenominer easily takes adventuring and exploration to a much higher level than Mojang’s game ever did in my books: I mean come on, it has gravity boots(!) and bots that can be programmed to do all that boring digging, mining and even construction work for ya! Can you say “the evolution of block-building gaming”?

That said, there’s more to it than simply playing a space architect, as you have to constantly monitor oxygen levels and battery power along with your health, so “rest” is not a word you’ll get to familiarize yourself with -- not until after securing a certain amount of resources at least. Just like in similar games, crafting and upgrading your tools plays a big role, and in Xenominer you start with a handful of tools available from the get-go. This definitely limits the amount of tree punching (or mineral processing, rather) you need to do early in the game, instead leaving you free to focus on acquiring resources to aid your odds of survival.

There’s also the lurking threat of radiation from a nearby star to deal with every time it passes by, so you better make sure that building a shelter is at the top of your priority list, along with some serious resource gathering so you can upgrade your equipment from “useful” to “wow” status sooner rather than later. If it all sounds a bit overwhelming, simply turn on the in-game tutorial and everything will be explained one step at a time, which is certainly a useful addition considering how complex certain tasks can be otherwise.

In case simply surviving on Xenos is not enough of a challenge, there’s also virtual trophy hunting to be done, with has 21 of these “awards”, which range from repeating the same tasks over and over, to accomplishing challenging feats; just don’t forget that ensuring your own survival goes above all else..

Xenominer can be purchased on XBLIG for $1 (80MSP) and according to the developer, a PC version should be out soon, so be sure to check back for more on that in the near future.
Official website and Twitter (@GristmillStudio).