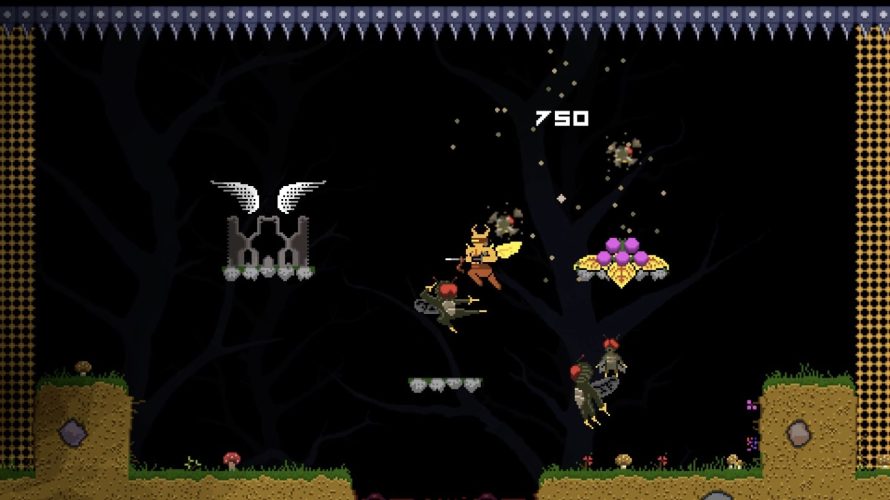 Zombies. At this point, I’m sure most are more than a little tired of seeing them constantly pop up in video games. But wait, hear me out! What if… bees were turned into zombies? That is after all how we ended up with the frantic platformer, ZOMBEEZ: A Killer Queen Remix, which is about to unleash its full potential upon the world. A real stinger, this one.

If you’ve been following my writings for a while, chances are you’ve come across ABS vs THE BLOOD QUEEN. If you haven’t, well, you’re likely more than a little confused as to what that has to do with ZOMBEEZ: A Killer Queen Remix. Unless you, you know, read the title. In which case this entire paragraph is wasted. Anyway… what’s really in a title?

Honestly, not a whole lot, outside of SEO indexing and a couple of other technical thingies, and yet, for its upcoming exit from Early Access, this first (of several?) single-player Killer Queen game is getting a bit of a rebrand. Probably because of the… uh… zombeez. See, unlike the intense multiplayer experience, Killer Queen Black, which has you hoarding berries and fighting for your hive, ZOMBEEZ: A Killer Queen Remix is instead a procedurally generated race against the clock as The Blood Queen has reanimated your hive, turning allies to enemies. Or zombeez, I suppose. Eerie stuff.

Battle bloodthirsty bosses including the Zillipede, SlimeFly, and even the Blood Queen herself. Then take those newly-honed skills to the Daily and Monthly challenge runs to ascend global leaderboards.

Run, fly, leap, kick you-know-what and take names – anything to survive and eventually, with a little luck, a shot at paying back The Blood Queen. By ending her reign of terror. Provided you’re skilled enough to survive the new area, Citadel of Blood, which follows on after Hell and The Outskirts. Hey, at least two of those don’t sound absolutely horrifying. That’s something. Even so, I’m sure that ‘one more run’ feeling is going to remain as the game reaches that fabled 1.0 and is, for all intents and purposes, finished.

So get ready to transform into a mighty winged warrior and let no BloodBear, BumbleBat, BubbleSlug, or FireSnail (what’s with those names?) live to tell the tale. Keep your eyes on the price as the challenge ramps up, and maybe explore a little, for who knows what you might find to aid with the carnage ahead?