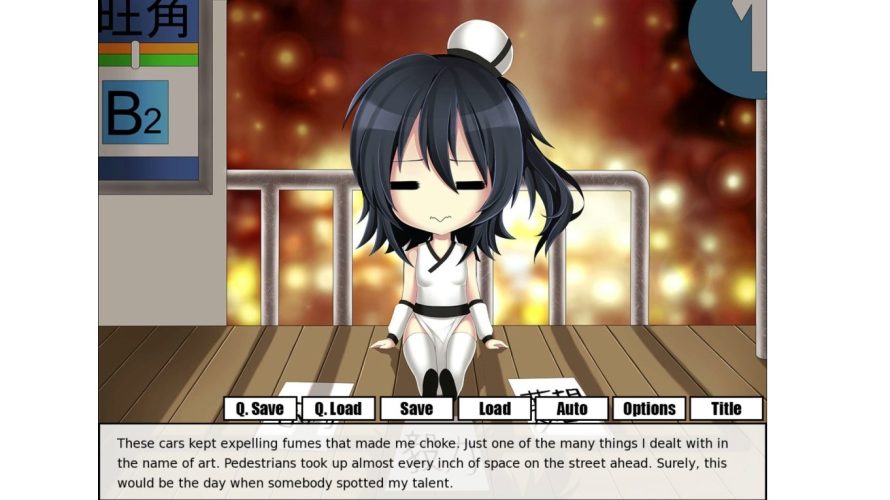 While most artists have little in common, their goal doesn’t really differ, in that they all want to be appreciated for their creation(s) on some level. Vinty, the protagonist in Without Within, is no different, and… well, she’s having a hard time getting noticed. Doesn’t help that her choice of craft is calligraphy either, as this is, quite frankly, a niche hobby.

On top of seemingly being unable to make a living off of her passion, there’s also the matter of a rather mean landlady to deal with, as the rent’s overdue! Not the best situation to be in for a struggling artist, so it’s hardly a surprise that her motivation and confidence have hit an all-time low – even before the story has a chance to really get started. But where there’s a will, there’s bound to be a way, right? Her dreams of greatness and glory remain intact after all, even in these troubled times, so… there’s that.

Throughout the twenty or so minutes this particular tale lasts, you’ll frequently be able to decide how Vinty should react in certain situations. While in other visual novels, choices are commonly used as a means of ‘branching the narrative’, this one’s more of a binary case, as there are only ever two at any given time – one right, one wrong. Fortunately, making the right call is simply a matter taking the protagonist’s situation into consideration before acting (on her behalf). An interesting, albeit somewhat simplified mechanic; yet in this case, it’s actually somewhat fitting.

Vinty has been getting nowhere with her calligraphy. Her confidence has sunk to an all time low. As life pressures her toward giving up, will she forget why she pursued this craft in the first place?

At the end of the day, simplified mechanics or not, I’d still say it’s a somewhat worthwhile read. A free, however brief, visual novel with a lovely art style, hints of self-awareness and a handful of ‘messages’ to boot, as Vinty attempts to market her art. Oh, speaking of… one has to wonder if Vinty will be able to face the challenges that awaits her artistic endeavors, and if she possesses the skillset(s) to handle them. Only one way to find out, and since Without Within (Steam, DRM-free) carries no price tag, what have you got to lose, really?