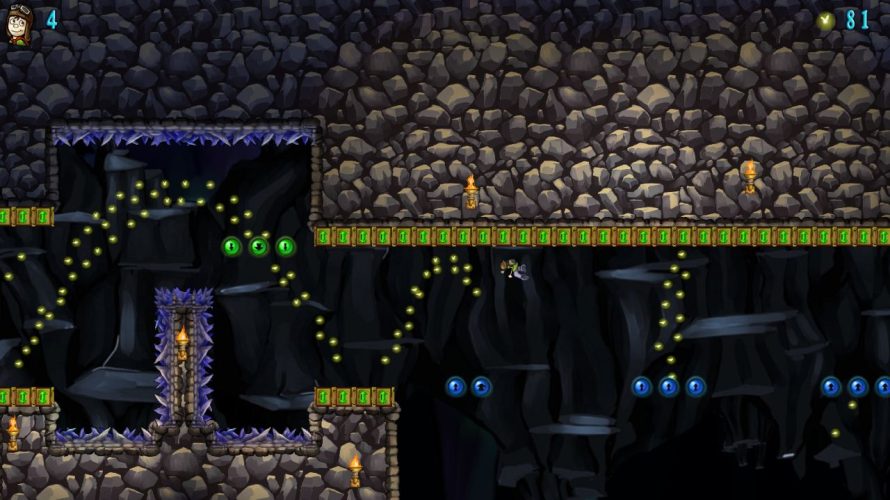 This is a “story” about a game called A Flipping Good Time, which can be downloaded for free from the developer’s website.


While I guided this kid through a series of mineshafts, he certainly seemed to want just that! Unfortunately, I quickly realized that I’m not the greatest puppeteer, as I got the poor guy killed over and over again.

Fortunately, he was more than willing to simply show up back at the last checkpoint we had passed, ready for me to try guiding him through the mine ahead again; what spirit! There was only one problem with this carefree attitude: He only had so many lives before it was all over.

We had quite the adventure, so pull up a chair and listen to our tale…
It all seemed simple at first. The methods for which I would move the kid around were made clear immediately (keyboard or 360 gamepad), so we took off. I made him jump, float and with the exception of countless deaths, I’m sure he did have a flipping good time!

He certainly showed no distaste, as he picked up tiny glowing objects, which turned out to be a kind of currency as after picking up 200 he cashed them in for an extra life in the blink of an eye. To this day, I still don’t know how he did it (magic?), but little did I care as it compensated for my poor puppeteering skills.

On this journey, we experienced and saw strange things.. blue and green orbs with arrows on them, pointing up and down. For some reason, I was the only one confused by this, as the kid simply adapted to each situation. Confused and puzzled, I experimented with each new object in our path and boy was I surprised when he picked up that first blue orb and gravity was literally turned upside down! “okay.. we can deal with this” I thought to myself, and soon after he grabbed a green orb – but this time I saw it coming as gravity was returned to normal.

Needless to say, this took some getting used to as where I came from, there were no colored orbs that reversed gravity.. which is a good thing. But as I came to grips with being turned upside down – or rather, having the kid turned upside down – we progressed through dizzying gravity flipping areas; complete with several casualties.

As he picked up more and more of the glowing objects, the number of lives at my disposal increased, though his mood did not improve at all. I wondered if he was secretly holding a grudge for all the times I had gotten him killed? He never said a word about it..

After a while, we found almost stranger things than blue and green orbs though.. including a red cape that somehow enabled him to slow his descent (again, magic?) and at this point, I wondered if we would ever encounter items that weren’t related to gravity? Even odder was the fact that as we left the area and went deeper into the mines, his cape had mysteriously disappeared. A shame, ’cause it certainly came in handy – especially when crossing spiked pits!

Deeper and deeper into the mines we went, grabbing orbs like they were collectibles to be sold on eBay, defying both gravity and often (though not always..) Death himself. Orbs and the glowing objects were not the only things this kid had an interest in though – these mines contained diamonds, and while I did not know their purpose in his world, who am I to question the value of gems?

At one point, we even found an abandoned minecart! After all this walking and jumping, it was a godsend, so I had him jump into it and.. would you believe the darn thing just took off as if someone had put it in gear? It was quite an exhilarating ride, though even inside a minecart he did not escape certain doom as those blasted spiky pits almost drew him towards them with a magnetic force.. but we persevered past all the troubles and after a while, found ourselves in front of the entrance to a path going deeper into the mine – only, it was locked!

The lock mechanism was puzzling to me, but the kid knew better: This was why he was so interested in us getting every single diamond – something we had failed at, so we had no way to progress any further. The kid suggested we simply went through it all again, but I was too exhausted so that became an adventure – and a story – for another time.

In conclusion…
So what do you think? Wish I did not have to cut the story short where I did, but I lacked the skill required to grab enough gems in order to unlock the bonus levels.. it was quite the experience still though, and one I would definitely recommend.

Update: I put a video review of the game up on my YouTube channel.