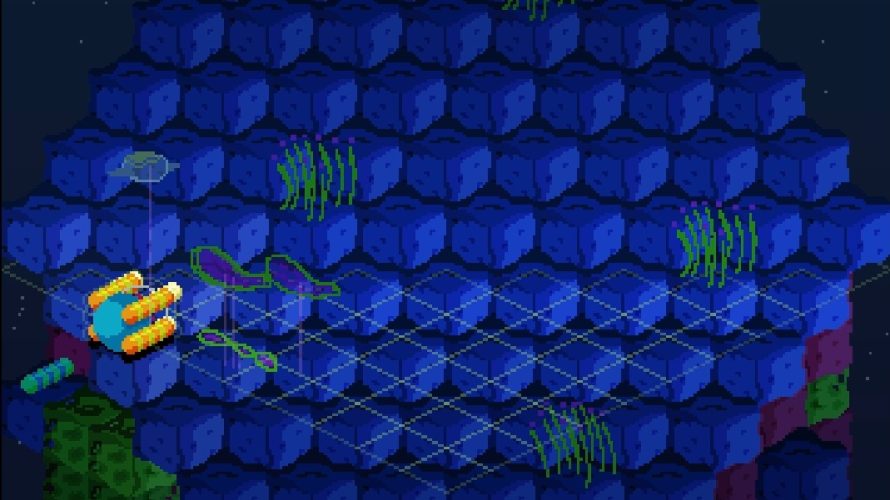 At one point or other, most people have delved the deep blue in a video game. Be it scuba diving, in a submarine or something entirely different, it’s hardly the most original setting. But what makes Vertico different, is the way it approaches the diving aspect, tasking players with navigating an isometric maze, going deeper and deeper… and deeper.

Who needs 6DoF (6 Degrees of Freedom), when you can have 3DoF? Tasked with going deeper and deeper in an oddly shaped submersible, searching for who-knows-what, you’ll have to fend off hostile creatures while at the same time keeping an eye on your oxygen meter. We both know what’ll happen once it runs out, after all, and that’s not a pretty sight. So do return to the surface now and then for a refill, eh?

Initially, you won’t be able to dive past one or two ‘areas’, but after picking up additional tanks, your air supply will increase, allowing for a longer journey into the depths below before needing to surface yet again. This is both a blessing and a curse. Figuring out where the terrain gap that lets you continue resides can be tricky, and you’d do well to remember its place for the return trip, but it’s still fun and somewhat rewarding. On the other hand, the submersible is much too slow, which makes the game a… well, patience tester. Oh and some sort of score system wouldn’t go amiss, giving it a proper goal for players to strive for.

Aside from those issues, it’s a fun and clever experience, albeit one that certainly could do with some additional tweaking. As it turns out, the developer seems to be aware of this, as a note on its LD29 page states “I really enjoyed making the environment and creatures and want to do more in the future”. Shouldn’t stop you from taking the plunge right now though, as no one knows when the next build will be available. Dive dive dive!