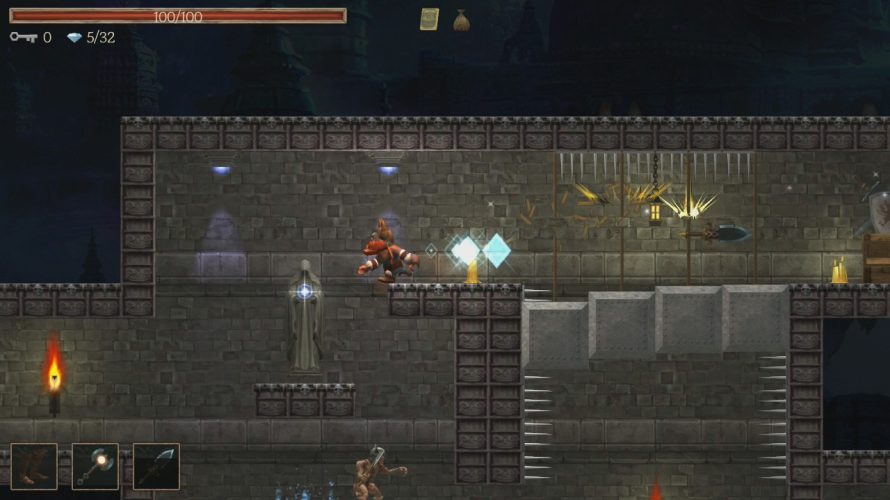 Ah, vikings. Far too few video games feature this particular lot. Far too few indeed, and this time they’re not even lost! Too obscure? Hardly, as Trial by Viking doesn’t really take itself too seriously either. I mean, the cast consists of a cynical Valkyrie and a talking polar bear, among other! The gameplay, on the other hand, leans heavily on noticeably more serious Metroidvania design, coupled with time-sensitive game-changing decisions, and seems to be both fast-paced and relentless. A proper good mix.

There’ll be plenty opportunity for players to embark on some dangerous dungeon delving, in search of vast riches and treasures across a whoopin’ 130 levels; provided they’re able to survive the many traps, environmental hazards, and demons, of course. Life of a viking ain’t easy, but that’s just the way it is. There are ways to improve your odds however, aside from simply playing better, as health containers and upgrade ‘points’ (in the form of sunstones) are hidden throughout each level. So you gotta ask yourself, will exploring further be worth the risk, or should you simply move on instead, taking the safer route? Your viking, your call.

Ain’t all about combat and searching for hidden power-ups though, as there are a wealth of boss encounters to deal with too, all of which I have a feeling are going to be both absolutely massive, and rather challenging. At least, I’m hoping they will, because… vikings! YEAH! Right. Anyway, there’s a bit of a roadblock before any of us will be able to fling axes and cut demonic beings in half in this stylish looking platformer, which is the need for (crowd)funding.

If $7,000 is pledged by September 18, 2015, Trial by Viking‘s Kickstarter will have been a success. If not, well, chances are its launch will be delayed. Although as the creator puts it, “Barring the zombie apocalypse, this game will ship!”, so at least it’ll still happen. Some rather decent high-tier rewards too, like the $250 one which lets ya add your voice to the game, or the $350 one, which has you naming a boss. Both include everything from previous tiers too, which is… a lot of stuff. Too much to list for sure.

On your journey, you will get to morph into a polar bear, steer a flying valkyrie through mazes of hazards, ride on the claws of a great owl like a zip line, fight a Kraken in a swimming pool, and sail on a viking long boat while having axe battles with Kobolds.

Now, if all goes well, February 2016 should see the full version released across Windows, OS X, Linux, with mobile and console versions following down the road. So what say we get it through Greenlight in preparation for a Steam release long before, eh? Need. More. Vikings.