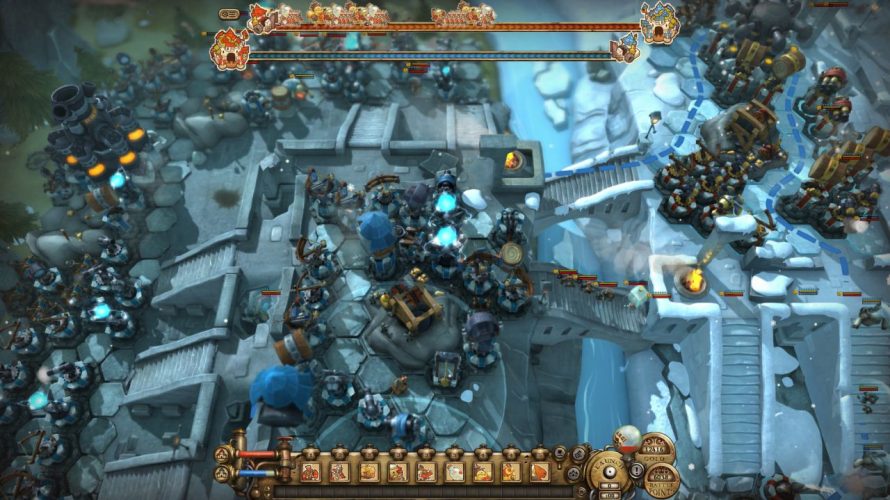 The goal of Tower Wars is to build and place units along a fixed path, to prevent an invading horde from reaching your main base, because we both know what’ll happen if they do make it through your defenses: They’re going to.. wait for it.. DESTROY IT! So what sets it aside from most other tower defense game then? For starters, the entire map is made of hexagon tiles; I’m not sure exactly how big a  strategic difference that’ll really make, but at least it’s something new compared to the tired old square-based system that so many games use.

Another feature that I feel a need to point out, is something rather important considering how competitive gamers are today: It has online multiplayer! And while it’s hardly the only game to feature such, seeing how Dungeon Defenders and Sanctum among other, both have fully functional multiplayer, alas they only have co-operative modes, not a single one that lets you compete against other human opponents. This is something Tower Wars seems to pride itself on however, as it has 1v1, 2v2 and 3v3 in ranked and unranked matches; or simply put: Versus and co-operative modes.

While the main focus does seem to be on demolishing other human opponents, there is an offline time trial mode too, for when you just want to compete against the AI and climb those online leaderboards which adds another competitive element: No one wants to be #2!

It’s available from the developer (via. the Humble Store), Steam, GamersGate, Green Man Gaming and Gamestop. Far as DRM goes, Steam activation is mandatory no matter where you buy it from, but at least this way you get them fancy achievements along with Steam Cloud even if you give someone besides Valve the $10.