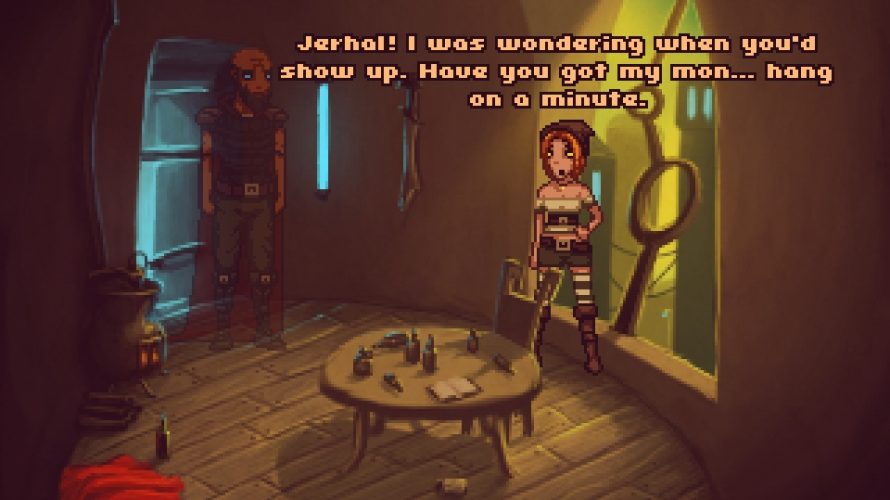 At first I thought PISS was simply a cryptic title for an adventure game and that it didn’t really mean anything, but at some point throughout the game, it suddenly made sense. PISS is about a woman who’s down on her luck, is plagued by nightmares and is barely able to remember her past, but one thing stuck: She has a debt to settle and no one is going to stop her!

PISS was released as part of the Summerbatch bundle along with four other games and it’s the latest in a long line of point ‘n’ click adventure titles from Ben Chandler. Far as I can tell, it also marks the first release from him that is not freeware, but.. a small spoiler before I begin my review: It’s worth it. You do get a bunch of other games in the bundle too, but this one’s about PISS and only PISS.

You play as Moira, a woman with a bad case of amnesia coupled with a drinking problem, and while I’m sure the two are very likely connected, fixing her memory problem is actually not what she needs you (the player) to help her with. It’s not so much that not being able to remember most of her past isn’t a problem, because it certainly is, but she has a bigger problem to take care of and somehow she remembers this much very clearly: A certain person who she helped in the past owes her a sum of money, but there’s a problem – he got himself killed before he could pay her! Unfortunately for him, Moira’s not going to let Death stop her from settling that debt. It’s a twisted tale for sure, full of mystery, drama, dead people (well duh!), living people (most likely because dead men tell no tales), alcohol and of course.. money!

Money is certainly right up there as one of the strongest motivators along with emotions, especially love and hate, so the lengths Moira went to get what was rightfully hers, did not really surprise me. Something else did, however, catch me off-guard: Certain dialogue choices actually changed events following those conversations, so pick your words carefully! Whether or not it has multiple endings tied to these choices is unknown to me, but after playing through the game several times, I always got the same finale so I highly doubt that there is, in fact, more than one.

It wouldn’t be much of a review without some technical details, so now that the story has been analyzed, spoiler-free as always, it’s time to dig deeper and take a look at the audio and visuals. While the art style is on the low-res side, it doesn’t really detract from the overall experience and neither does the lack of spoken dialogue, it simply means you’re gonna have to read every single line yourself instead; and while there is a LOT of dialogue, it’s both witty and well-written.

Controlling Moira in this adventure is a simple task, as the left mouse button is for any and all actions, from opening doors to addressing other characters, while the right one is for inspecting both objects and said characters, should you have an interest in Moira’s opinion on their choice of clothing. While it’s not the longest or most complicated point ‘n’ click I’ve played, at least there were none of those ridiculously annoying timed puzzles certain titles in the genre are plagued by and once everything was said and done, there was no doubt in my mind that I had helped make Moira’s life better.

Want to know what I mean by that? I’d recommend picking up the Summerbatch bundle, and don’t forget that there are four other games in it too; plenty of bang (or point ‘n’ click?) for your buck there.

Update 2: PISS can now be found here, as per this/these tweet(s) from the creator.