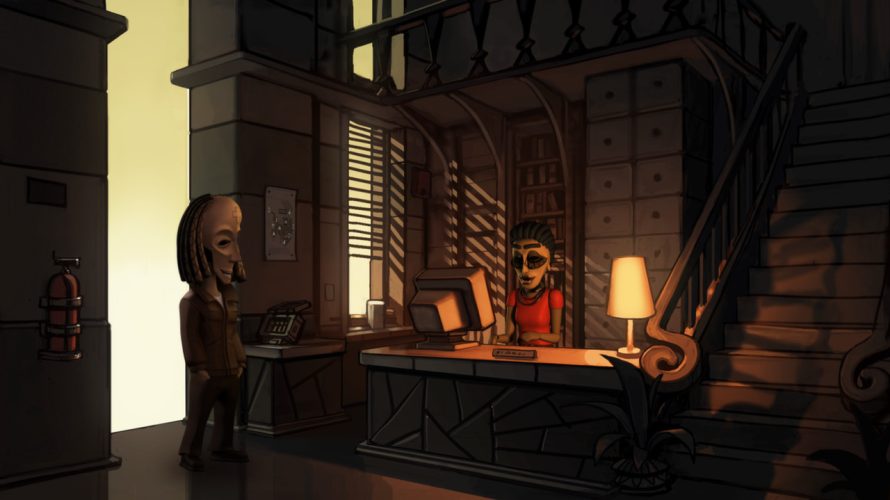 It’s been a while since fans first followed Bwana and Kito through the beginning of pointy and clicky quest in The Journey Down: Chapter One. A couple of years, in fact, but now the next chapter is finally here, and on every major desktop and mobile platform to boot (except Android, for now).

Now, part one of the trilogy served more as a brief introductory tale, feeding players background story, familiarizing them with the cast, and so on. In contrast, the continuation seems to be much more involved, with mention of both pirates, a gloomy town, at least one dark conspiracy and, wait, running from the law? Those two? In trouble with the authorities? Actually… I could see that being a thing, and quite easily too.

Seriously though, with what appears to be an awesome hand-painted art style like that of its precursor and a second serving of funky reggae jazz, I’m definitely intrigued. Probably helps that I enjoyed the first chapter quite a bit too, which reminds me: if you have yet to experience The Journey Down, there’s no better time than the present, since until September 1st, The Journey Down: Chapter One is free on iOS ($0) and 90% off on Steam ($0.69). Can’t beat that kind of discount.

On a related note, The Journey Down: Chapter Two‘s pre-order campaign was quite successful, raising a lovely $4,213.81! SkyGoblin, the series’ creator, won’t be pocketing more than half the amount, however, which is why I saw to bring it up: the other half is going to the construction of the Mavuno Secondary School in Tanzania. Hopefully, that donation will be able to help move the project along at a steady pace.

The Journey Down: Chapter Two - Official trailer
Facebook Twitter LinkedIn Pinterest Tumblr WhatsApp Telegram E-mail
Previous article Mobile Version of '8bit Doves' Is Quite the Upgrade From Its Nitrome Jam Origins
Next article Time For PAX 10 Discounts In the Form of a Humble Flash Bundle