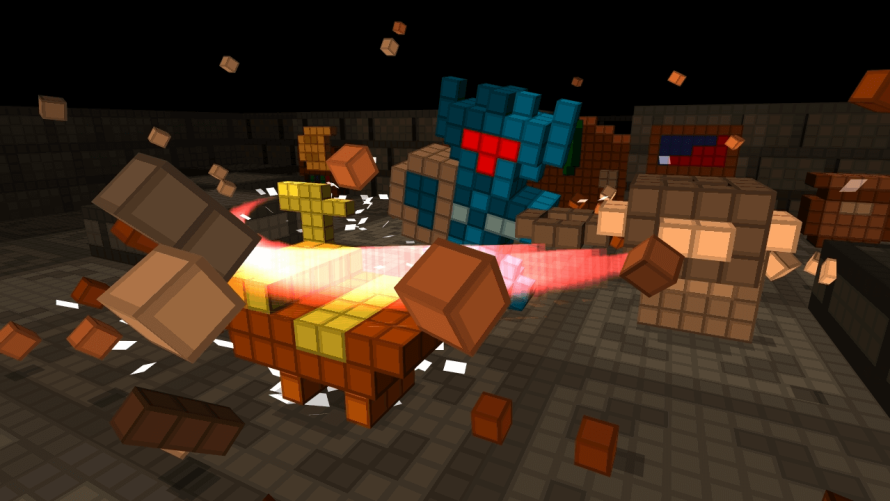 What do you get when you combine fast-paced voxel destruction with online (and offline) co-op that takes place in procedurally generated dungeons, wherein almost everything is a potential weapon and fun loot awaits? A game carrying the odd name The Forgettable Dungeon, that’s what! Doesn’t sound forgettable to me though.

Oh wait, I completely forgot to mention that death is permanent in The Forgettable Dungeon. That’s right, no coming back from the great beyond here. Wait, that… alongside randomly generated dungeons -- guess the name makes sense now? Kinda. Right. This next bit probably goes without saying, but: items, like the lay of the land, are also random (in placement), ensuring each run is as different as possible from the last.

I mean, sure, you’ll still be smashing blocks to pieces, stabbing monsters, quaffing potions, reading scrolls and what-have-you, but… you know what I mean. It’ll still be different. Well, different enough, anyway. And in case that’s not enough, go ahead and reskin everything to your heart’s desire: characters in the editor, everything else by messing around with the PNG files. How’s that for easy modability, eh? Just remember to make backups first.

You won’t have to go at it alone either, as The Forgettable Dungeon supports co-operative play, both online (2-15) and offline (2-4, split-screen). Won’t be too easy with a full party of fifteen either, as the difficulty scales based on how many are in the current session, so feel free to bring as many friends along as you can gather (well, up to fifteen, anyway). Also, be sure to frequently remind other players that they can revive teammates by carrying their corpses down the ladder; or failing that, in a coffin on the next floor! Spooky.

Although I’ve taken the game a long way in my spare time, the funding will let me focus entirely on finishing the game in the next 6 months. Between Kickstarter and my savings I will have the ability to completely focus on the Forgettable Dungeon.

But before we’ll get to the good stuff (ie. picking up and playing the full version), there’s the matter of crowdfunding to deal with. While Anthony Rotondo is mostly done building The Forgettable Dungeon, a fair amount of content still needs to be created, tested and polished. As such, if a grand total of $8,315 is raised by November 13, 2015, he should be able to launch the game on Steam during May 2016. Beta? December 2015.

Now, while currently planned for Windows and Linux, the Kickstarter does feature a $12,000 OS X port stretch goal, alongside a noticeably higher $40,000 massive visual overhaul, should the campaign go really well. So… let’s get it kickstarted, eh? The clock’s ticking after all, with more than 50% still missing!