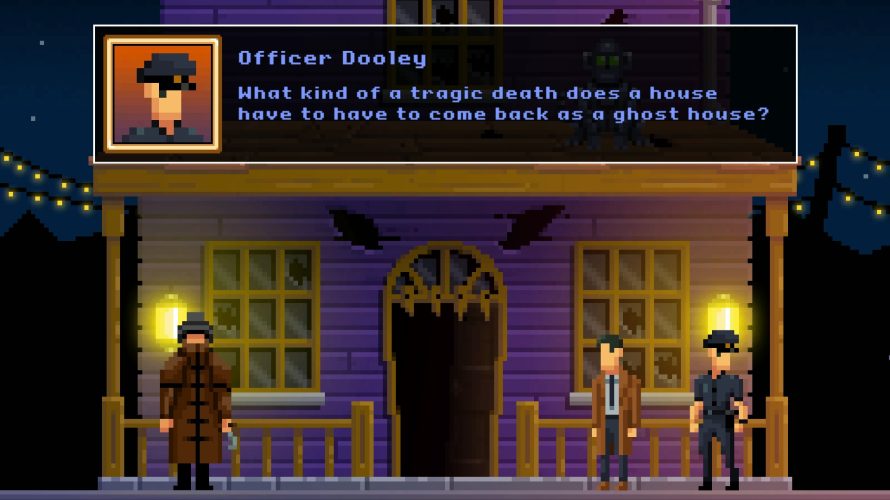 It’s been a few years since Francis McQueen last hit the streets of Twin Lakes City with Officer Dooley, trying their best to put an end to… weirdness. Or the supernatural, I suppose, although sometimes a bump in the night is just a bump in the night. Right. Anyway, the time has come to once again investigate, question, and do lots and lots of pointing and clicking, as new cases await in The Darkside Detective: A Fumble in the Dark.

In case you’re new to the series or are simply pondering why anyone would take on such potentially overly complex detective work, well, someone has to keep the Darkside at bay. Such is the expertise of this particular duo, as aided by you, the player, in this here brand new pixellated affair. It’s a dirty job, but somebody’s gotta do it.

Whenever you hear a bump in the night, feel a tingle up your spine, or smell something fishy, Detective Francis McQueen isn’t far behind.

Just might also be a rather entertaining gig, given the original’s emphasis on less-than-subtle comedy – something I’m sure we’ll see more of in The Darkside Detective: A Fumble in the Dark as each of the six new cases are thwarted, the forces of good (or as close as we get to that, in this day and age) claiming victory. All in a day’s (week’s?) work, for McQueen and Dooley!

The Darkside Detective: A Fumble in the Dark will be pointing and clicking its way to Steam, GOG.com, and itch.io… soon.