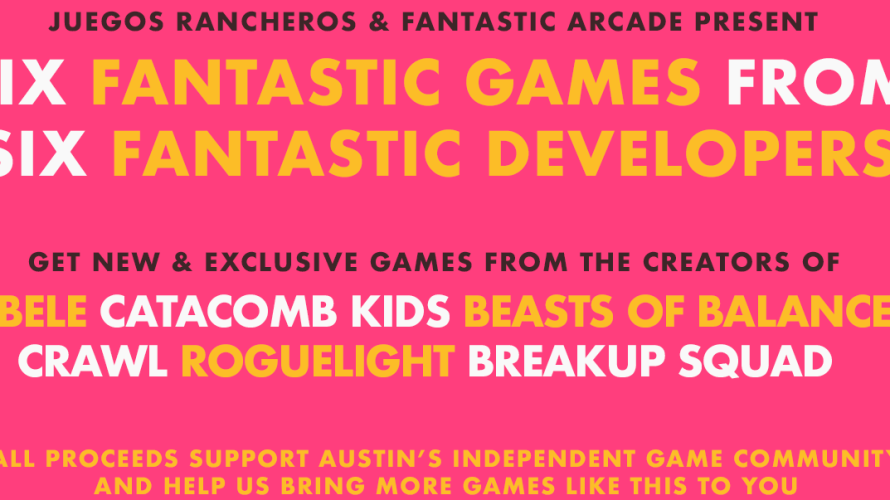 Ah, I somehow missed Fantastic Arcade, in spite of planning to cover the event well ahead of time (ie. long before… yesterday). Well, better late than never, and even more so with The 2018 Fantastic Arcade Bundle knocking on credit cards everywhere, featuring six rather unique titles.

I’m sure you’re familiar with bundles at this point, seeing how the darn things are still all over the place, offering everything from books to software and of course… games. But unlike that of most other, the contents of The 2018 Fantastic Arcade Bundle is not available elsewhere. At least I don’t think that’s the case? Feel free to correct me in the comments section if I’m wrong. That said, forking over $15 will get you six games from this year’s Fantastic Arcade.

All proceeds from the sale of this bundle benefit our non-profit organization. Help us showcase more amazing games both here in Austin and a city near you, and commission more fantastic developers to create new games like these!

Grass Stains
by Nina Freeman & Friends
Grass Stains is a local multiplayer game about two little kids, their dog, and a soccer ball on a summer day. Kick the ball too hard at your friend and you might just knock them over. Will you play fair and help them up, or tease them while you score point after point? It’s up to you!

Paper Planet Pop
by Tyriq Plummer
Brave robot Pop is in trouble! Stranded on a strange planet and hunted by the Hand of Hate, he must fend off wave after wave of threats: Coinsteroids, pinvaders, cosmic jellysquid, and space pirates galore! Though Pop is no pushover, the presentiment persists: How long can our plucky protagonist persevere in this petite planetary predicament? Find out in: PAPER PLANET POP!

WiFi Robots
by George Buckenham
Did you know: your phone is secretly also a robot? And everyone else in the venue’s is, too! Connect them together and hack them all.

Breaker
by Daniel Linssen
BREAKER is a weird blend between breakout, space invaders and ikaruga, and features an original, responsive soundtrack by Dubmood with sound effects by Martin Kvale.

Kaiju Super Datetech
by Powerhoof
A Giant Monster has appeared in Kyoto II! The city’s only hope is for you and your company to construct a Colossal Robot, maneuver your creation to the target creature, and… ask it out to dinner? Or a film? Or something?

ComPETition
by Catt Small
ComPETition is a competitive cat petting game for two players. Who will win the cat’s affection before it gets bored? Who will be scratched into shame? Grab a friend and find out in this fuzzball extravaganza!