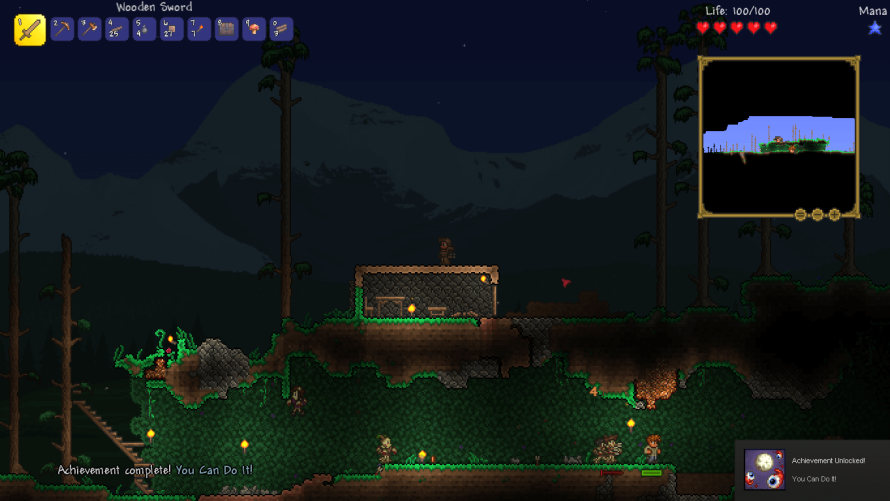 I doubt that anyone – including its creator – foresaw when Terraria launched back in 2011, that it would still be getting post-launch support in 2015. Yet here we are, almost four years later and the game just got another absolutely massive content patch. Even the most dedicated players will have reason to return, with a partial(!) list of 1.3 changes, additions and tweaks spanning more than 300 bullet points! So… very… groovy.

Now, much as I absolutely love Terraria, it has been a while since last I journeyed through its dangerous lands, but upon reentering, the first thing I noticed was… NPCs ‘socialize’ now. Yup. Oh and they’ll get all defensive too, should one or more hostile creatures approach, which is so darn useful. You know, because in the past, they’d just stand there and get killed. Less useful. Ah, such a great change.

There’s so much more too, like multiplayer (finally) running through Steam, item linking in the chat, craftable Target Dummies, and more than eight-hundred new items, to name but a few of the additions in this patch. Several items also cost less to purchase / craft now, which will lessen the grind if nothing else, and… Expert Mode enables players to start from scratch in a significantly more unforgiving world, because why not? Hardmode? Pft. Easymode, more like, at this point.

What, still not satisfied? Check out the complete Terraria 1.3 changelog then, after which you should be. Either that, overwhelmed or both. Yeah, probably both. I certainly was. So much new stuff! Groovy.