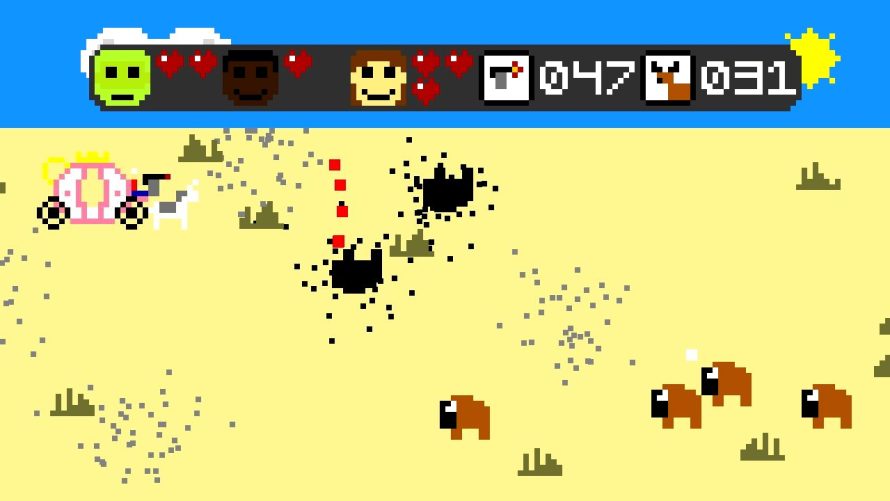 One day, a small party set out to venture across the great plains. Buffalo herds, armed bandits, bank robbers and other troubles made up the first month. It was a rough time and there were casualties. Later, when tasked with crossing a river, they learnt the hard way that swimming in unknown waters is rarely wise. Exactly what became of the trio in the end, remains a mystery. Campfire tales make mention of a giant squid, while the evening wind carries whispers of crazed unicorns.

Phew. Imagine if the American pioneers had it this rough, and… well, random. See, in Super Amazing Wagon Adventure, you’re rushed through a semi-random chain of events, which will either lead to the demise of your party or – wait, no spoilers. There are constants though. In spite of the journey being rather brief, you’ll still need supplies. As such, the game always throws in several hunting trips, and if you can kill it, you can eat it. Horse, bear, buffalo, coyote, wolf – being picky was not a luxury they could afford.

But before you get to gun down wildlife, a party must be assembled. Best I could tell, their appearance is purely cosmetic, so I just clicked ‘random’ and moved on. Next you get to pick from a ridiculous amount of wagons, although only one is unlocked from the get-go. The rest becomes available after accomplishing certain tasks, like jumping very high and, believe or not, travelling through time! Hardly the most realistic Oregon Trail inspired adventure ever, but it certainly is fun.

Seeing how each wagon comes with a unique set of ‘features’, it can be tempting to ditch the standard one as soon as you have access to something else. I’d recommend playing for a good bit and get a grasp of how everything works, before you jump vehicle, so to speak. Chances are, you’ll be surprised by not only how the alternatives handle, but also how often and in which direction they shoot. Since such a large part of the game revolves around killing things, riding something with proper firepower is downright vital.

That said, even if you pick the most common one, getting through it all in one piece can be incredibly tricky, as colliding with pretty much anything will injure a party member. If you think stampeding buffalo and hungry coyote are dangerous, just wait until someone falls ill. Medicine wasn’t exactly an everyman’s item in the mid-1800s after all, so keep your eyes on the road and watch out for skunk (if only that was merely an obscure joke). Also, once someone dies, they’re gone for good.

One minute you could be massacring a herd of buffalo, the next trapped in an avalanche, the next attacked by eagles while falling off a cliff.

If the experience sounds incredibly chaotic at this point, that’s because… well, it really is. That’s not to say you won’t ever be able to beat the game though, but random being random, you’ll likely end up encountering the majority of scenarios first, losing countless people in the process. Throughout each attempt, there’ll also be one or more choices to make. Although as far as I could tell, the outcome of each is – unlike most of the game – not random. 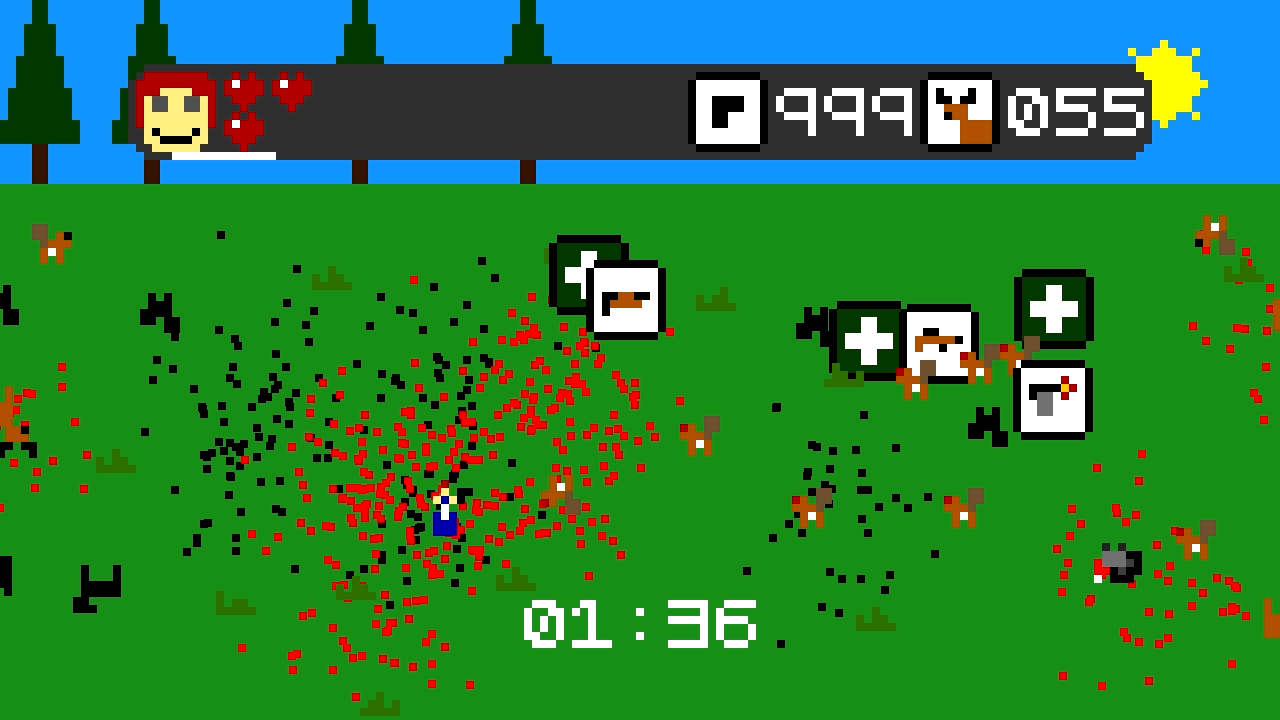 Oh, and we mustn’t forget about the many survival modes, which will truly test your ability to blast everything that moves – once you’ve unlocked them. See, each has a special condition that must be fulfilled, but unlike the wagons, there are no hints as to what they may be. Depending on how long you manage to stay alive, if at all, a rating of up to three stars is presented for that ‘stage’, following your untimely demise. Ironically, this system is tied to unlocking a specific wagon; full circle, and so on.

There may not be much to look at from a technical standpoint, but its pixellated design, chiptune-ish soundtrack, and over-the-top gameplay do come together in the form of an entertaining package. Besides, what if the unicorn/giant squid thing isn’t simply tall tales told by the village drunk? Is that really an adventure you want to miss out on?

Super Amazing Wagon Adventure is available for Windows (with soundtrack) on Steam and Desura, while Xbox 360 users can find it on Xbox Live Indie Games.