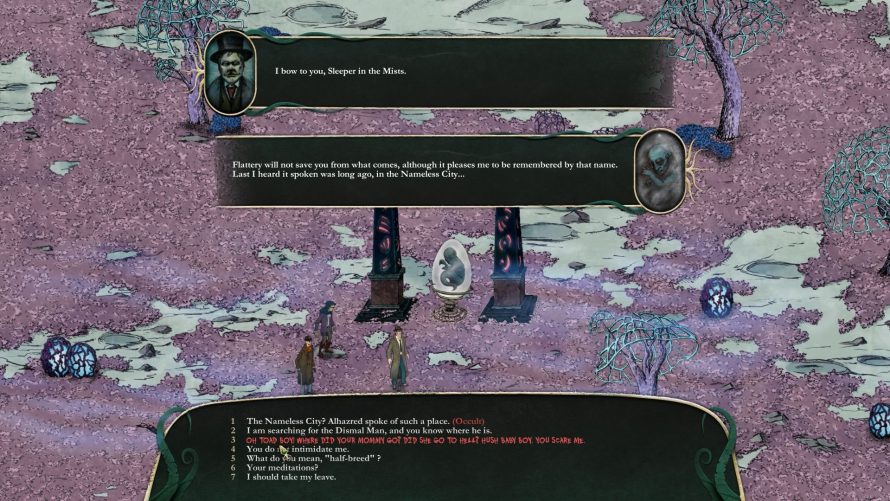 Drawing heavily upon the works of H.P. Lovecraft, Stygian drops the player right into a world gone mad, promising “a bleak journey from a ruined Arkham to the very depths of the Abyss”. Equally intriguing and terrifying, I’d say, and you probably won’t live to tell the tale. Don’t let that stop you though, for while the world is long gone, you do have reason to continue fighting, to figure out what caused it, why Arkham still stands, and above all else… who the Dismal Man is!

As for who YOU are in this gruesome game of twisted realities, black magic, and unruly beasts -- well, that’s a bit clearer. A bit. See, before you venture through these dangerous landscapes, ready to kick ass in Heroes of Might & Magic inspired battles and/or match wits with the locals, your persona must be crafted -- or selected, rather -- from a handful of archetypes. These act as templates for who you are, less so than who you will become, each with a unique prologue to kick things off.

Oh, and should you consider dabbling in the dark arts, as it is rather tempting given its potency here, just keep in mind that there’s a price to pay for each spell cast. I am not referring to something simplistic such as mana or a consumable item either. No, in Stygian, each use of magic is going to take a metaphorical bite out of the practitioner, be it in the form of health, sanity, morality or something even worse. So weigh your options carefully, including that of your two companions, because the odds are already stacked against you; do not worsen them unless you absolutely have to.

Sanity and the mental state of the character will influence dialog options. Mental illness creates benefits as well as hindrances. Sometimes it helps to be mad in a world gone mad!

But there’ll be no chanting fireballs, raising the dead, bashing abominations with spiked clubs, and saving whatever can still be saved, unless Stygian gets funded. Or at least, its creator “will have to narrow down the scope of the game considerably”, meaning the success of its Kickstarter campaign is more about expansion than completion.

That said, at the time of writing, only $34,233 of $61,312 has been pledged, although with 24 days to go… time is definitely still on their side. As for the release of Stygian, November 2017 on Windows, OS X and Linux should be it. Fingers crossed!