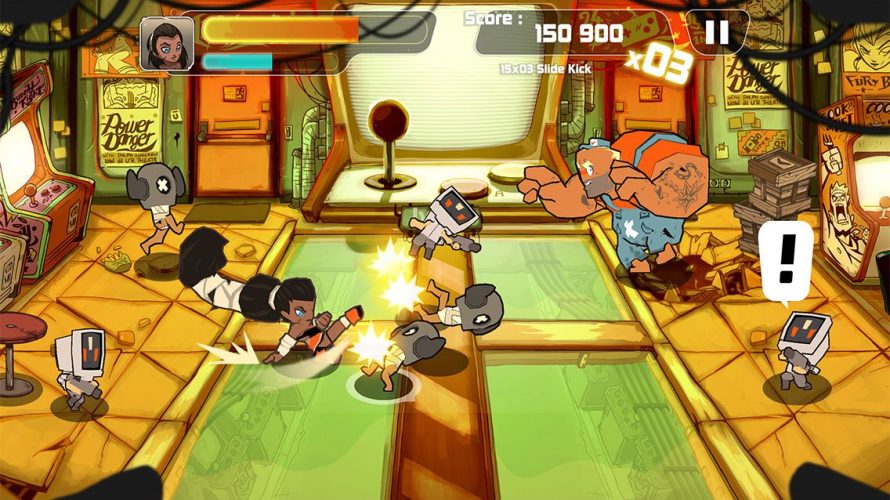 After the highly successful Squids and Squids Wild West, The Game Bakers are heading in a brand new direction with their next project: Combo Crew will be a co-op beat ’em up! Who needs another puzzle game anyway, right? If you ask me, we need more indie games where the focus is on using your fists and feet to break bones and humiliate one’s friends, rather than those that make your head spin from thinking too much.

No less than three heroes are been held hostage in a tower and the only means of escape is to fight your way to the very top. This means you’ll be doing plenty of ass-kicking and name taking, so it’s a good thing that their training methods are inspired by classics like Final Fight and Streets of Rage – why settle for anything but the best, after all? There are even fancy special moves, although I doubt many will be as ridiculous as the screen-clearing police car from Streets of Rage…

While I like where this is going so far, there’s still one potentially game-breaking problem – the controls. Beat ’em ups on touch-screen devices have a tendency to struggle in that area, but The Game Bakers are positive that they’ve managed to figure out how to keep everything smooth and fast: “Swipe to attack, tap to counter, and use a two-finger swipe to unleash combo streaks unique to your character’s martial arts skills.”

“With Combo Crew, we wanted to bring back the spirit of the old console beat ’em ups—the ones you used to play on the couch with your buddies—in a way that makes sense on modern mobile platforms” – Emeric Thoa, The Game Bakers’ creative director.

Even though it’ll be on multiple platforms, asynchronous multiplayer will be possible, making this a battle where Apple and Google fans will actually be on the same team for once. Combo Crew will be brawling on iOS and Android devices this spring… C-C-C-C-Combo Breaker!