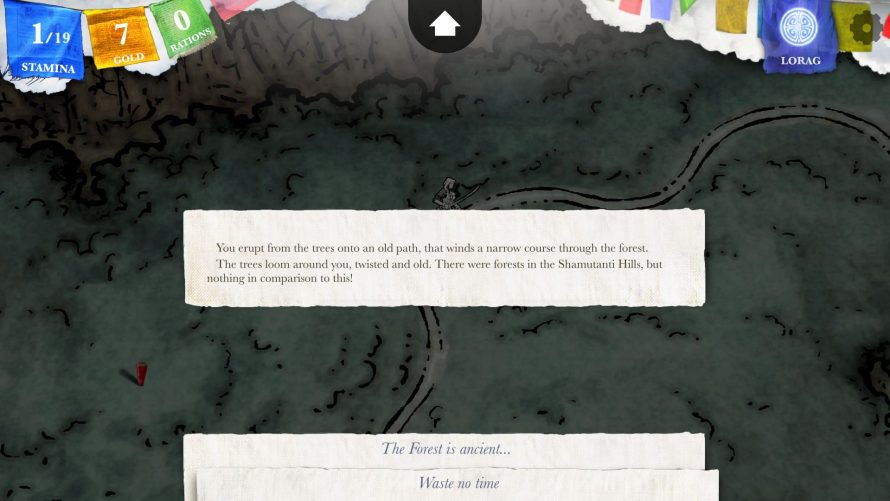 It’s time to continue your quest for the fabled Crown of Kings, in this third part of the Sorcery! Quadrilogy. Time to traverse dangerous landscapes in search of seven deadly serpents. Spells will be cast, weapons flailed about wildly, something something tough decisions and swift death. Yours, unless caution is exercised, at which point evil will have won. So do try to avoid dying, eh?

Following the events of Sorcery! Part 2, the player has left the Cityport of Kharé behind for good (one way or another), a brand new challenge lies ahead: the vanquishing of seven monstrous serpents! It won’t be easy, but hey -- who dares wins, right? Provided the right choices are made along the way that is, as otherwise… well, let’s just say that knowledge will be a vital companion throughout this particular journey.

Knowledge, magic and your trusty sword, of course, as while certain encounters can be avoided by those with a silver tongue, sometimes there’s no avoiding getting your hands dirty. Guts and blood flying everywhere, because monsters. That said, while not a lot has changed in terms of combat, as you’ll still be acting based on whatever your opponent just did, some pretty major additions did sneak into this third chapter. 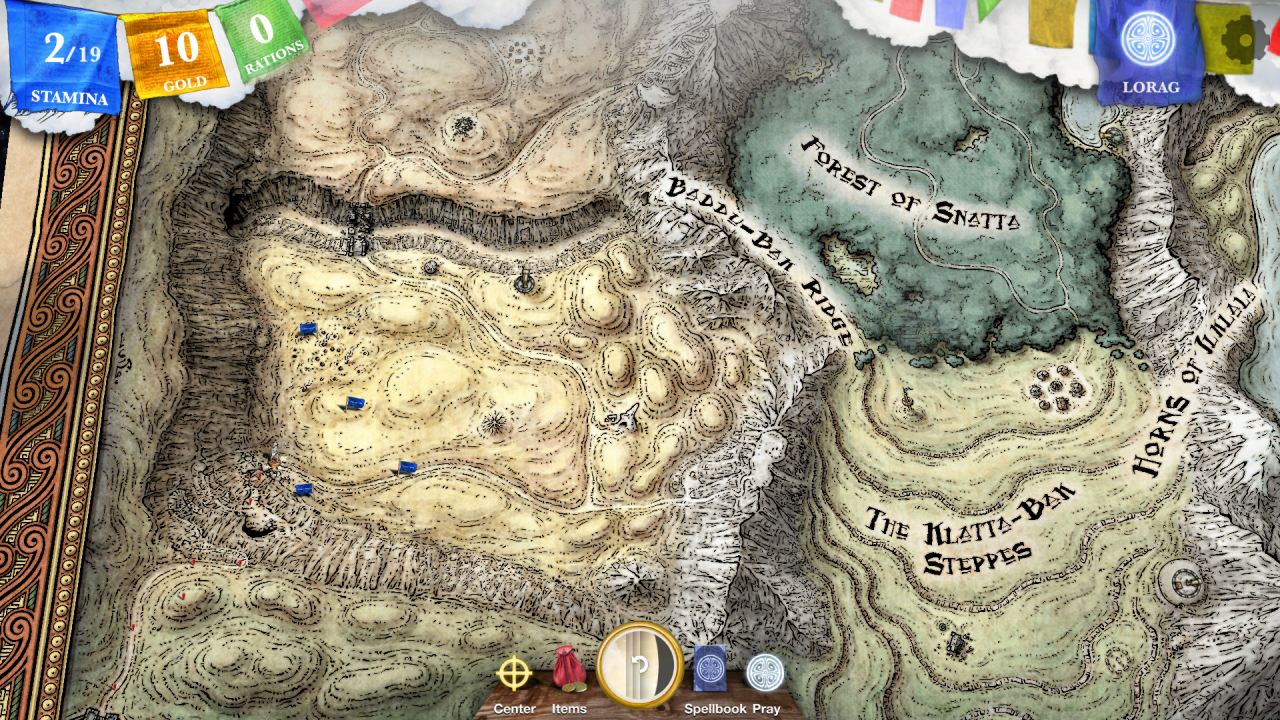 Like in Sorcery! Part 1 and 2, you’re able to move freely across a massive map, and the story adapts to whatever path you end up taking. But this time around, you’re able to -- at key locations (or beacons) -- literally change the world. Point its light at an area, and watch it change to a past version before your very eyes. An amazing addition that adds a rather dynamic feeling to the overall design. Very groovy.

New spells and characters also await, some with frequent usefulness, while other… less so; spells and characters alike. Oh and thankfully, the ‘rewind’ feature remains intact, assuring that even the most fatal, linear path to a dead-end can be avoided without having to start over from the beginning. Given the number of traps, challenging encounters and hazardous puzzles found within Sorcery! Part 3, this might end up feeling like more of a necessity than a useful tool, sadly.

The land of Kakhabad is a wilderness -- a ruined desert, a tangled forest, cruel mountains and fissures, all guarded by seven fearsome serpents. But you must cross this land if you are to reach Mampang and the Crown of Kings.

That does, of course, depend on which path you take across forests, mountains, lakes, deserts and even a small town or two, as both danger and the exact opposite loom around every corner. As such, choosing not only actions but also dialogue options carefully is of the utmost importance. Who’s to say what forking over a bit of gold to grease some wheels might get ya, after all? Maybe nothing, maybe a game-changing tip, or maybe… something else entirely. Only one way to find out!

Logic will, however, get you far, lowering the amount of guesswork required to progress along the path of least resistance. But sooner or later, everyone slips up. Everyone. Even the most hardened adventurer (which you certainly rank among, having finished Sorcery! Part 1 and 2). What, you haven’t played the prior entries? Well, while the save import feature is lovely and all, according to the developer, starting with Sorcery! Part 3 is perfectly viable. I’d recommend against that though, as having prior choices come back to either bite or benefit ya is worth it, no matter the outcome. 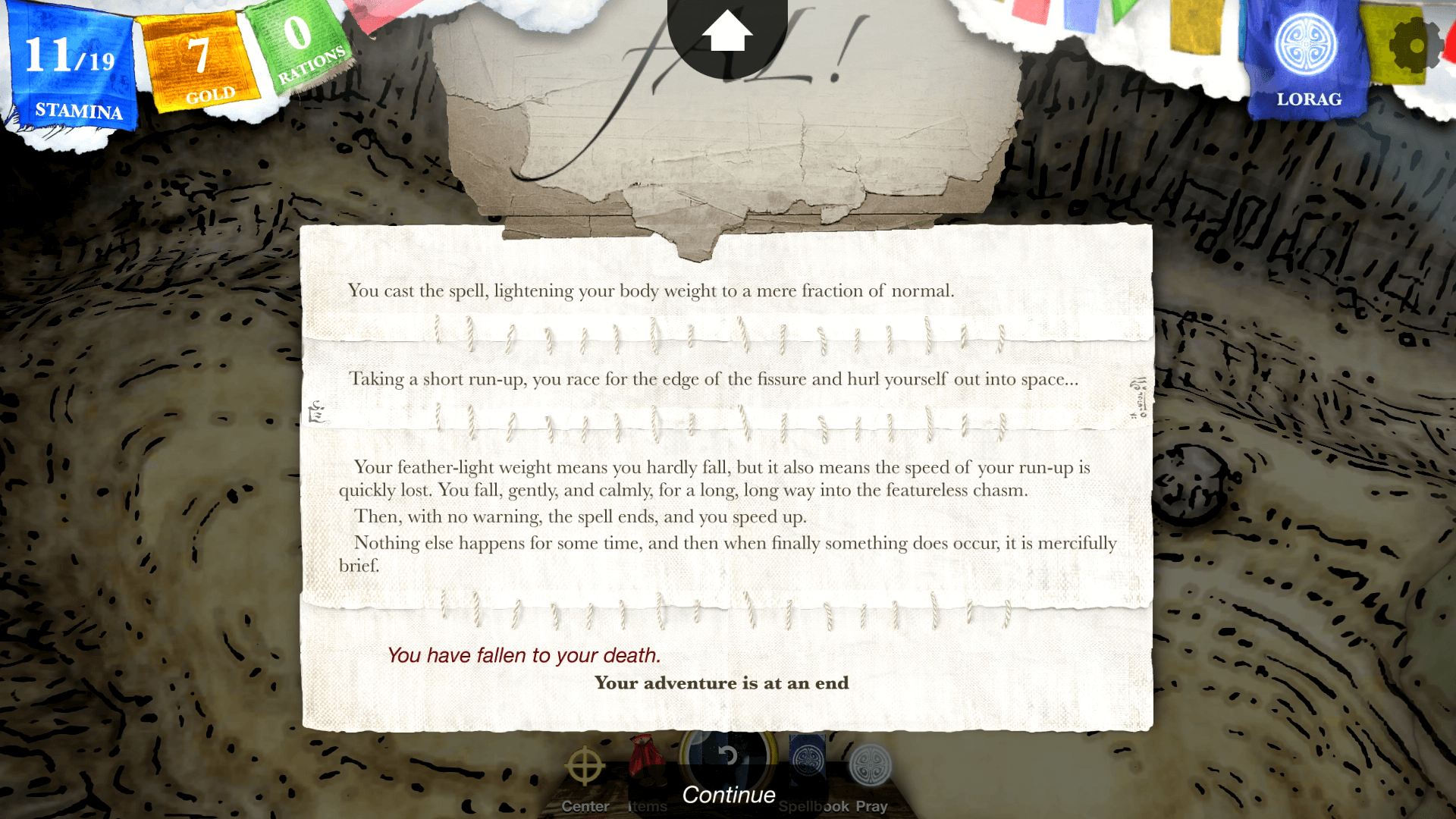 Now, as far as length goes, this is definitely one of the most content-packed choose-your-own-adventure titles I’ve played (which is saying something, given my long history with Fighting Fantasy). At one point, I got to thinking I was nearing the end, ready to breathe a sigh of relief following many a hardship. But then it immediately hit me: I had only rid Kakhabad of two serpents, meaning there was still a ways to go.

It was fortunate then, that Lady Luck seemed to favor me more often than not, although there were times when the odds were against me to the point where not even loaded dice would have helped. Times when the most powerful spell would likely fizzle, allowing my opponent to zap away my remaining stamina, restarting that very battle. But that’s fine. At this point, I knew what I was getting into with inkle’s adaptation of Steve Jackson’s Sorcery!: an expanded and challenging adventure, free of dice rolls and character sheets found in the original gamebook(s).

Actually, that’s not quite right as Swindlestones makes a return, enabling the acquisition of either information, gold or both, through… wait for it… dice rolls. Dice rolls, bluffing, trickery and such fun stuff. Oh and the opponents are annoyingly good at it in this one, so best of luck if you decide to partake in said activity. May the dice be with you. 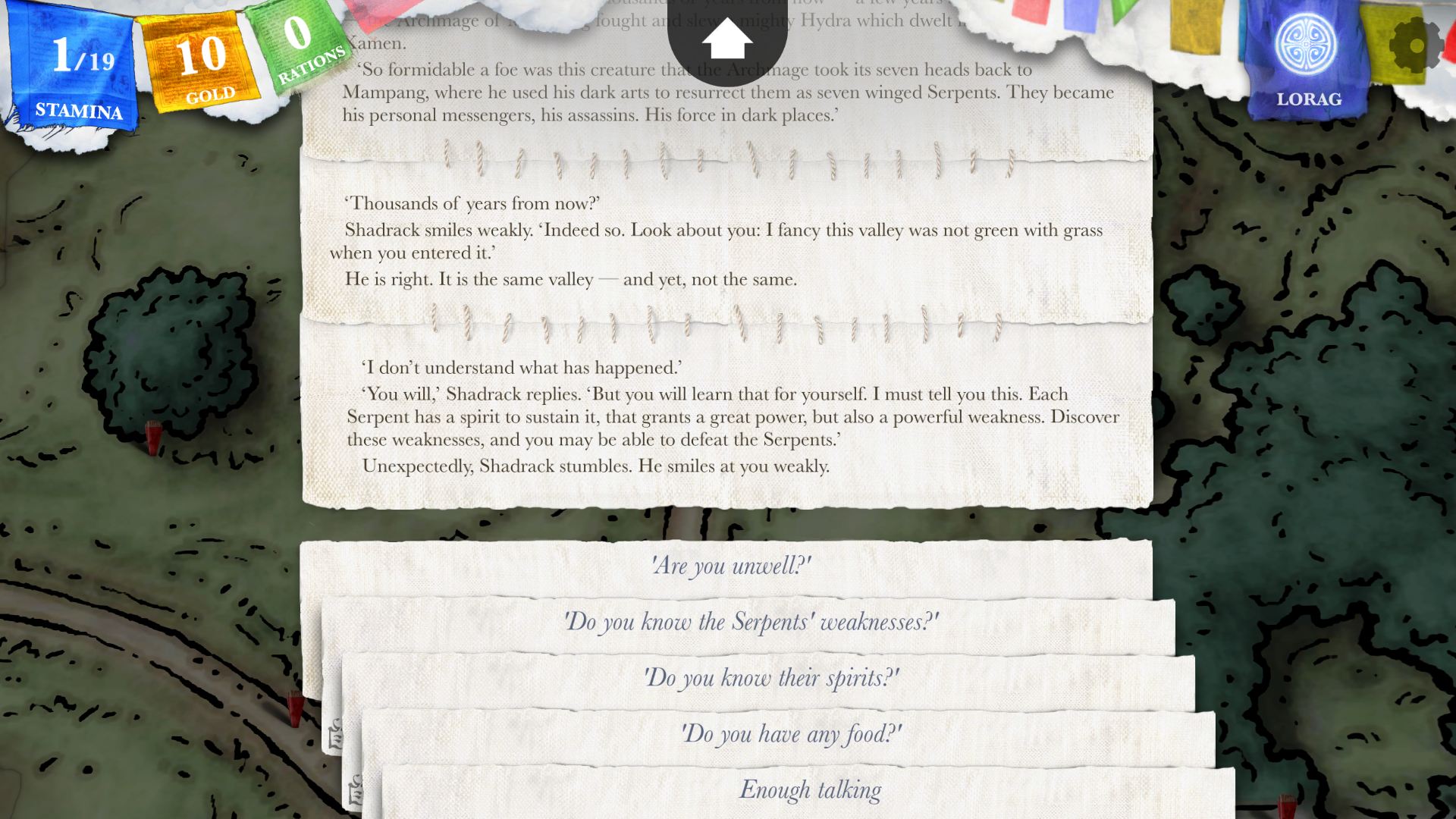 All in all, there’s a lot to like about Sorcery! Part 3. A lot. It’s an adventure full of choice-driven gameplay, tactical combat, a unique magic system, a variety of interesting characters and a vast (dynamic) world to explore, all of which are definite positives. In contrast, my only genuine complaints likely stem from the source material, as they relate to things like semi-cheap deaths and certain encounters. I mean, inkle has done a terrific job updating the ancient, printed gamebook for modern times, but -- for better or worse -- a lot remains the same. In spite of that, it’s still an easy recommendation.

Sorcery! Part 3 is available from Steam, carrying a $9.99 price tag.