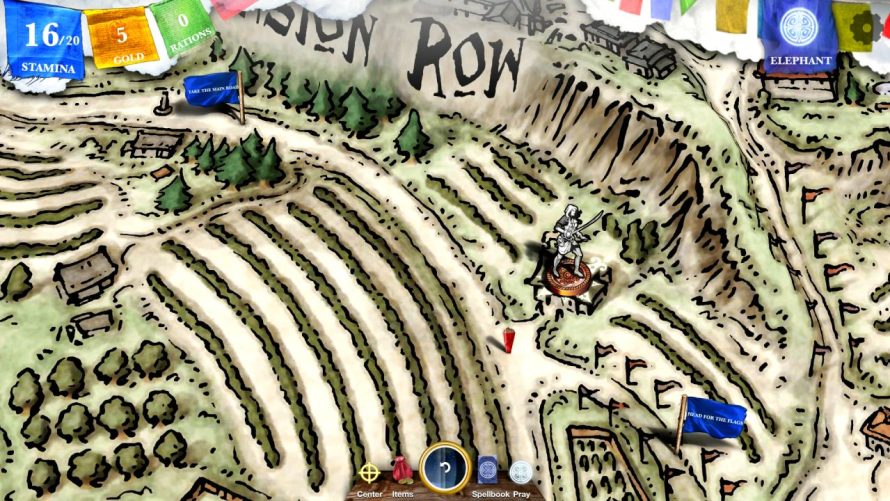 Having trekked through the Shamutanti Hills, it is now time to face the city of Kharé in Sorcery! Part 2. An easy enough task, if not for the fact that it’s inhabited by scum, low-lifes and troublemakers, and… something about the north gate being locked by magical means. Because there’s apparently no catching a break for the series’ protagonist. A hunt for clues it is then! Clues with which to open that accursed gate so that I may proceed into the lands beyond Kharé -- or die trying.

And die I did, time and time again. I thought the hardships I had endured up to this point would make what lied ahead at least slightly easier. I was wrong. The city of Kharé is about as hostile as they come, and you’d do well to watch your back in this place. That and your wallet, as thieves are roaming the streets, hidden in every other crowd, simply waiting for a chance to cut your purse (or worse). But if you play your cards right, maybe this can be turned to your advantage instead, changing enemy to ally?

Clues will, after all, need to be gathered if the north gate is to be opened, and the only way to do that is to ask around, choosing carefully who to trust and who to, well, you know the alternative by now and it ain’t pretty. Some will prove very beneficial to your cause, while other are more of a hindrance. It all depends on what you say and do, which choices you make, some of which may not have immediate consequences. 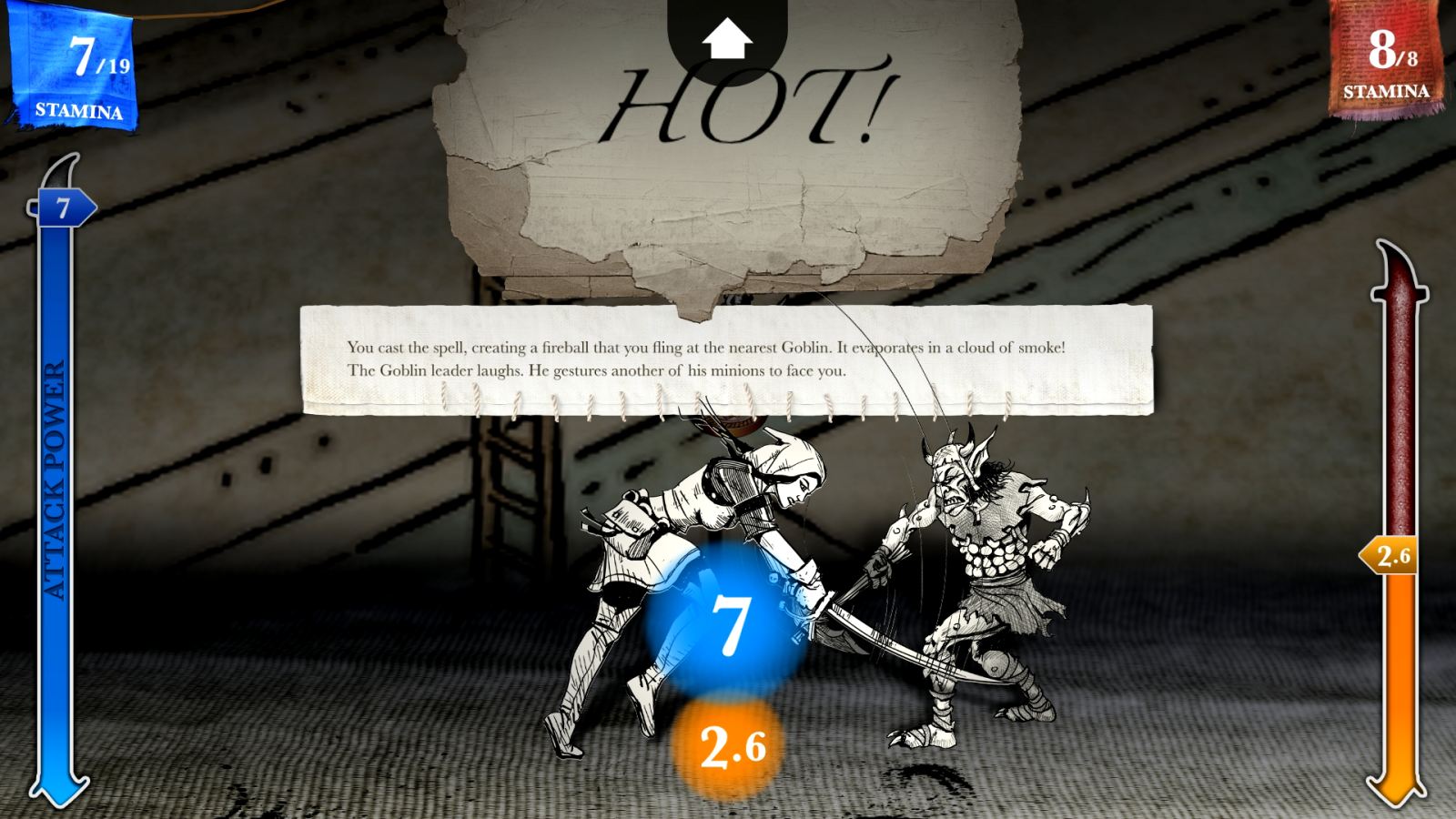 Speaking of which, depending on what you did and who you interacted with in Sorcery! Part 1, you may or may not have an advantage going into this second part of four. Like, say, meeting up with an old ally or having an incredibly useful item in your possession. Stuff like that. Brawling and spellslinging, while largely unchanged from the first game, will only get you so far after all, and given the increased difficulty… even a tiny advantage is a welcome one.

See, while the city walls may shelter you from dangers from the outside world, there’s still the matter of its residents, most of which aren’t exactly overly helpful or welcoming. That’s not to say everyone’s out to gut ya though, and even unlikely allies may be good for something; a distraction, perhaps, while you make a mad dash for safety? Or perhaps you share a common enemy, meaning a temporary alliance can be made?

Anything is possible, in this city of thieves. Anything, including becoming a burglar yourself! Just keep in mind that as mentioned earlier, you are still a stranger, an outsider as it were. As such, the locals are bound to hold you in lower regard than someone of more reputable standing. So be prepared to fight, should you get caught -- unless of course, you’ve been blessed with a silver tongue (or rather, knowledge of which dialogue choices will fix your current conundrum). 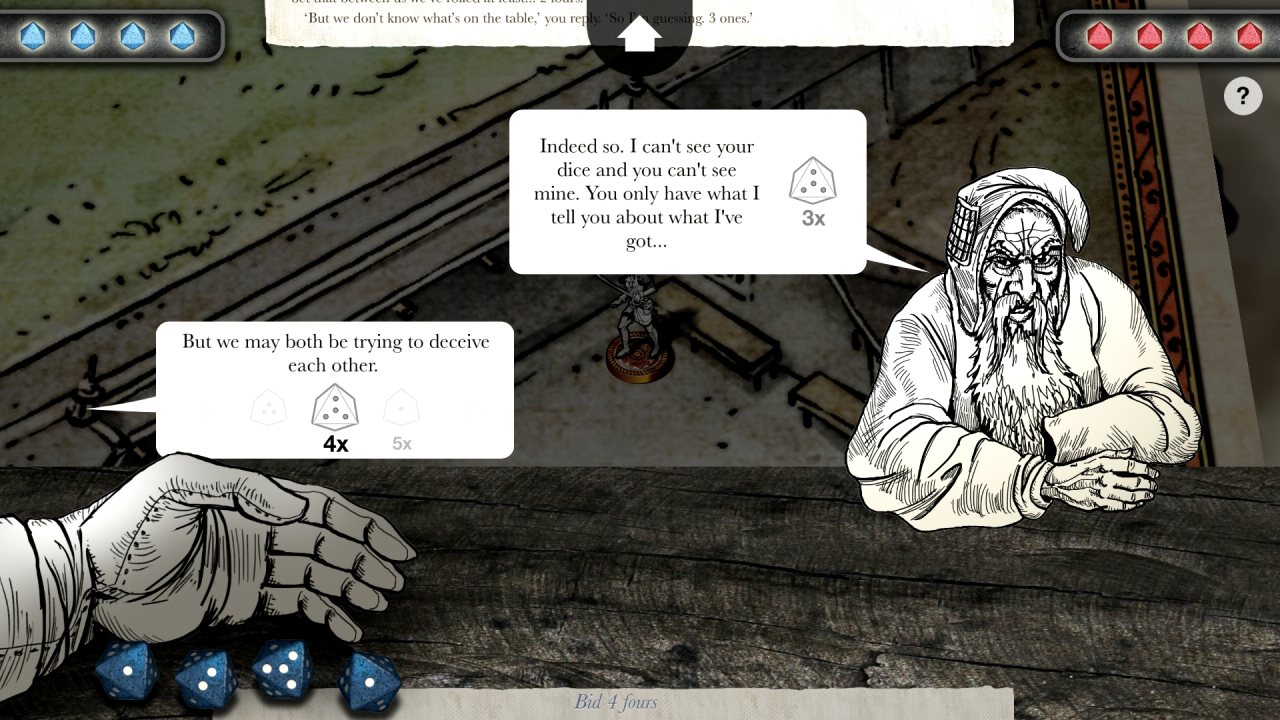 Or you could opt for a more peaceful route instead, trying your luck with the dice to earn enough gold to buy food, ale and perhaps even… information. See, among other new things, Sorcery! Part 2 introduces the concept of gambling, enabling the player to chance a game of Swindlestones against certain citizens. It’s an interesting little diversion, and one that can make ya quite a bit of gold at times, while also bringing about a clue or two; it is after all common for people to get chatty while rolling a set of dice. Not uncommon at all.

Although as I mentioned earlier, it’s not all fun and games (get it?), as on top of making it through the city in one piece, there’s also the matter of figuring out how to open the gate. Otherwise, you’ll be spending the remainder of your days inside Kharé, and that’d be a darn shame seeing how Sorcery! Part 3 and Sorcery! Part 4 still await, along with, you know, the Crown of Kings. That is after all why you’re going through all this trouble.

There’s plenty to do as you search high and low though, some of which does include actual fun-and-games. I mean, danger probably looms somewhere around the festival area, but that doesn’t mean you should avoid it like the plague. Who knows what manner of intrigue and excitement such might bestow upon you, after all? There’s also a marketplace where one may spend coins on fancy items and -- as is the case with any city of this size -- smelly sewers and an uncanny graveyard. Whether one or both, are best avoided is for me to know and you to find out. Or don’t. Your adventure, your choices, and all that good stuff. 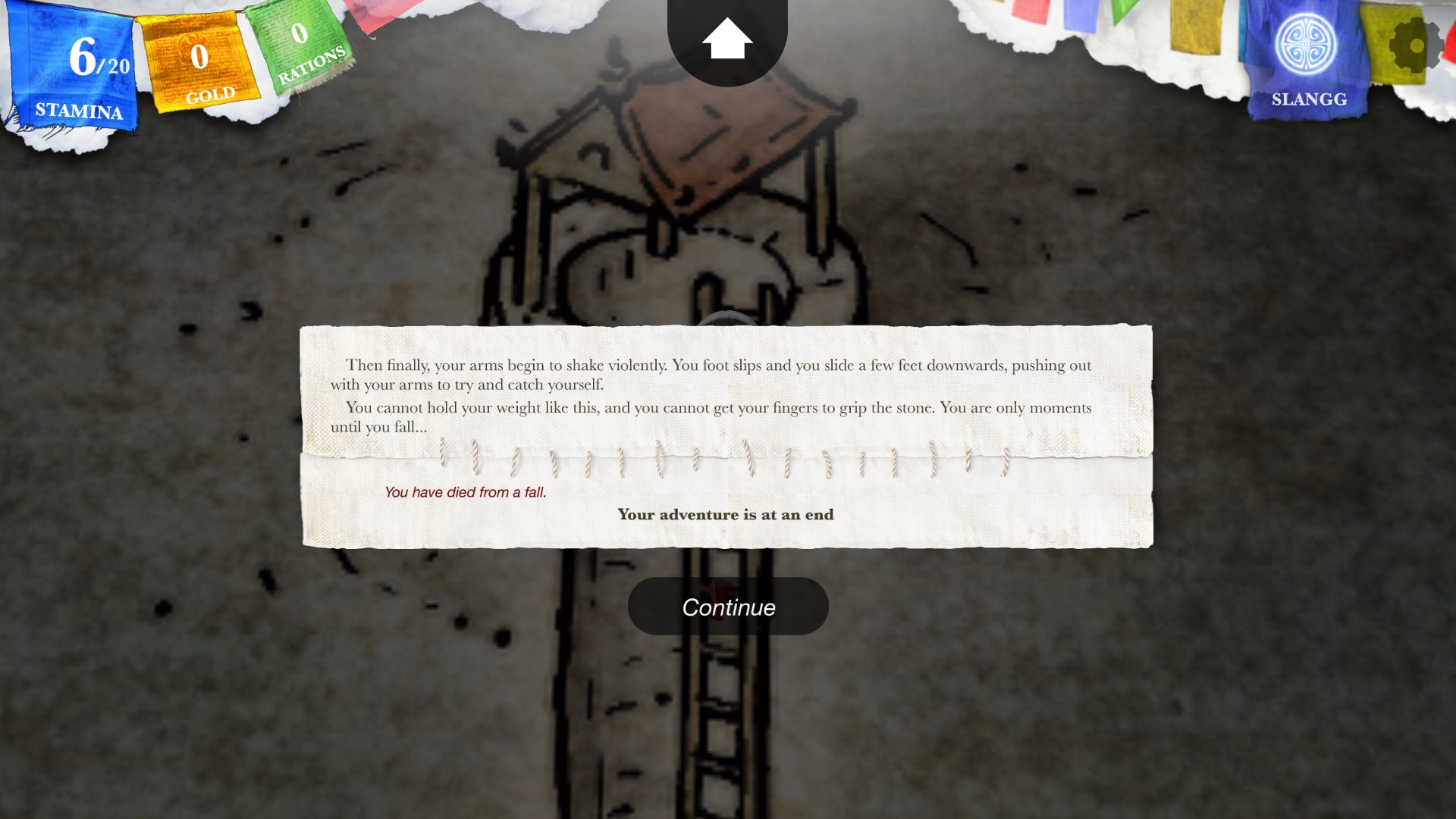 Now, I did mention earlier that the difficulty had been ramped up from Sorcery! Part 1, and by this I do not simply mean that combat is more challenging. After reaching the fourth or fifth ‘dead end’ (emphasis on ‘dead’), I found myself wishing that was the case. But no. There simply seem to be a lot more pitfalls in this part of the saga, making its infamous rewind feature ever more important, allowing players to retry from a past checkpoint, as it were.

Given the length of Sorcery! Part 2 (more than twice that of the first game!), this is bound to come in handy since restarting would mean retreading a lot of ground. It might also lead to new discoveries however, seeing how doing everything in a single playthrough is virtually impossible. Not entirely though -- and that is all I’m going to say about that, to avoid spoilers. Well, save for one thing: this version of the gamebook has an additional ending! One which will become apparent in due time. Oh yes.

All in all, while the fact-finding mission you’re on in this chapter/part could probably have been structured better, at least it’s never boring! That and the overall change -- like in Sorcery! Part 1 -- from a text-based dice-rolling affair to one with actual animations and a less RNG-based combat system, still feels great. Oh and if you’re the kind who gets all giddy about seeing the consequences of your actions play out, you’re going to love this one, as certain events really mix things up. Big time. 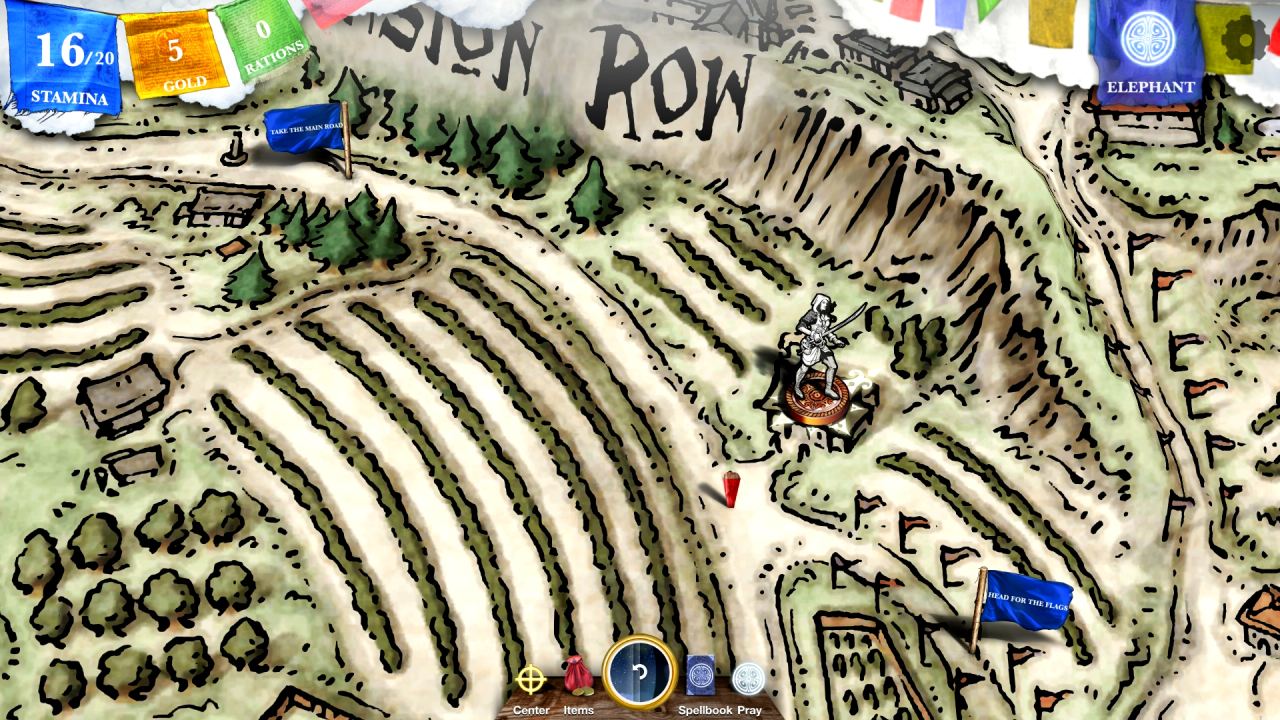 Best of all, just like how events/choices in Sorcery! Part 1 shaped parts of Sorcery! Part 2, your journey into -- and hopefully through -- the Baklands in Sorcery! Part 3 will also be different, depending on what you did or didn’t do, who you spared, who you gutted, and so on. Fun times ahead, as we get closer to the fabled Crown of Kings…

Sorcery! Part 1 and 2 are available for Windows (reviewed), OS X from Steam and Humble Store with a $9.99 price tag. Alternatively, part 1, 2 and 3 are available for iOS (iTunes) and Android (Google Play) at $4.99 apiece.