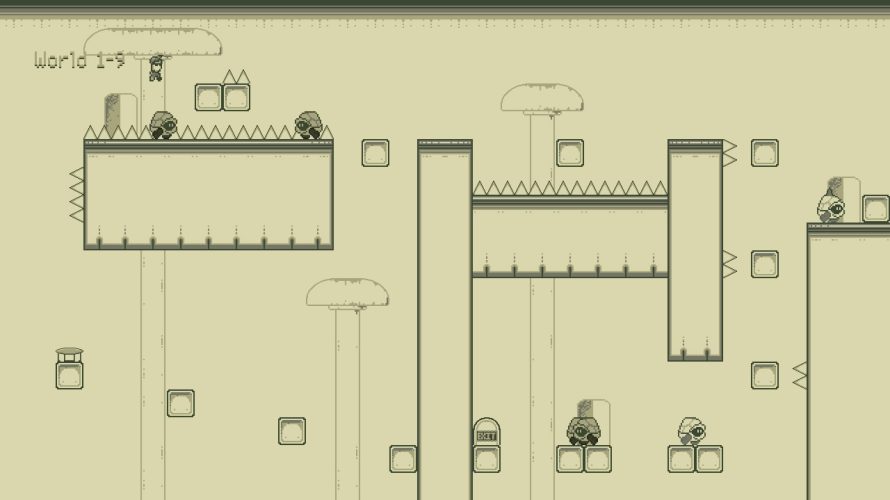 When a developer decides to go for a retro look in their game, the most common thing is to use either an 8-bit or 16-bit art style, but Halcyon Softworks painted their 2D platformer using the GameBoy palette instead and the PC version is out so I figured, why not try the demo?

Slick is certainly not the most complex platforming title out there far as the controls go, seeing how you can only move left, right and jump, but that doesn’t mean it’s a walk in the park either. The first few levels, of which there are a whoopin’ 100, start out simple the difficulty certainly does its best to keep the player on his/her toes and before the first world of five have been cleared, chances are death will have occurred at least a dozen times, so hooray for infinite lives!

Exactly how difficult bouncing around, avoiding enemies and other obstacles on your way to each level’s exit is, depends for the most part on your skill level as the controls seem pretty responsive (I guess you could say they’re.. slick); so if at first you don’t succeed, try and try and try again.

Were it not for Slick being a widescreen game – something Nintendo’s black/white system lacked, then the music combined with the art style and simple controls would just about complete the illusion of Slick being a brand new GameBoy game! It’ll set ya back $1.99 for the PC version on Desura and $1 (80 Microsoft Points) for the 360 version on XBOX Live Indie Games.