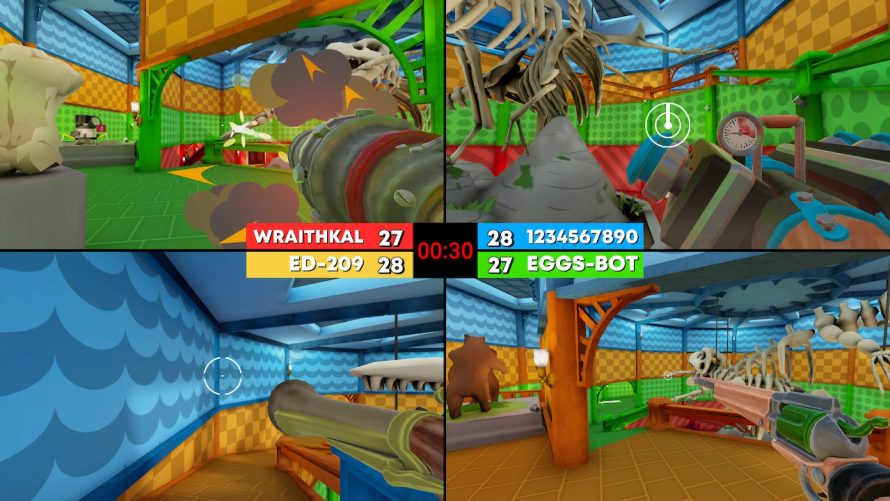 Split-screen gaming is a dying art. Blunt, perhaps, but there’s no other way to put it. Online gaming has destroyed couch multiplayer and that’s a shame. I’ve felt like this for a while, but… significantly more so after playing Screencheat: Unplugged – a game that turns back time to the glory days of 4-player split-screen first person shooting. Also, everyone’s invisible. At all times.

That said, Screencheat: Unplugged, the recently released (and improved) Switch version of 2014’s Screencheat, is not without flaws, however few and minor. So let’s get those out of the way first: no online multiplayer functionality to be found anywhere. Was it a bad idea for Samurai Punk to ditch this in favor of tweaking/enhancing this port, assuming that is the reason for making it offline-only on Switch?

Not one bit, and I’m not just saying this because the bots are quite fierce opponents (even on the lowest of three difficulties), ensuring there’ll be no empty slots; unless you want less competitors of course, as 1v1 and 1v1v1 can also be done. In my experience however, the chaos and carnage doesn’t truly shine until you’ve got a full team of four looking frantically at each other’s screens to determine the opposition position. Because… invisibility. I did mention that, right? Right. Good. Very important.

One decision that does however baffle me ever so slightly is the fact that, unlike Screencheat – aka. the 2014 original (PC/OS X/Linux/PS4/XB1) – Screencheat: Unplugged actually involves a fair amount of leveling to access just about everything. One map, one weapon, one mode – that’s all you have from the get-go. In spite of how (relatively) easily XP is acquired, it is still not ideal; especially as I suspect most will want to dive right in and play all the rather unorthodox modes… instead of being stuck with deathmatch for a good bit. 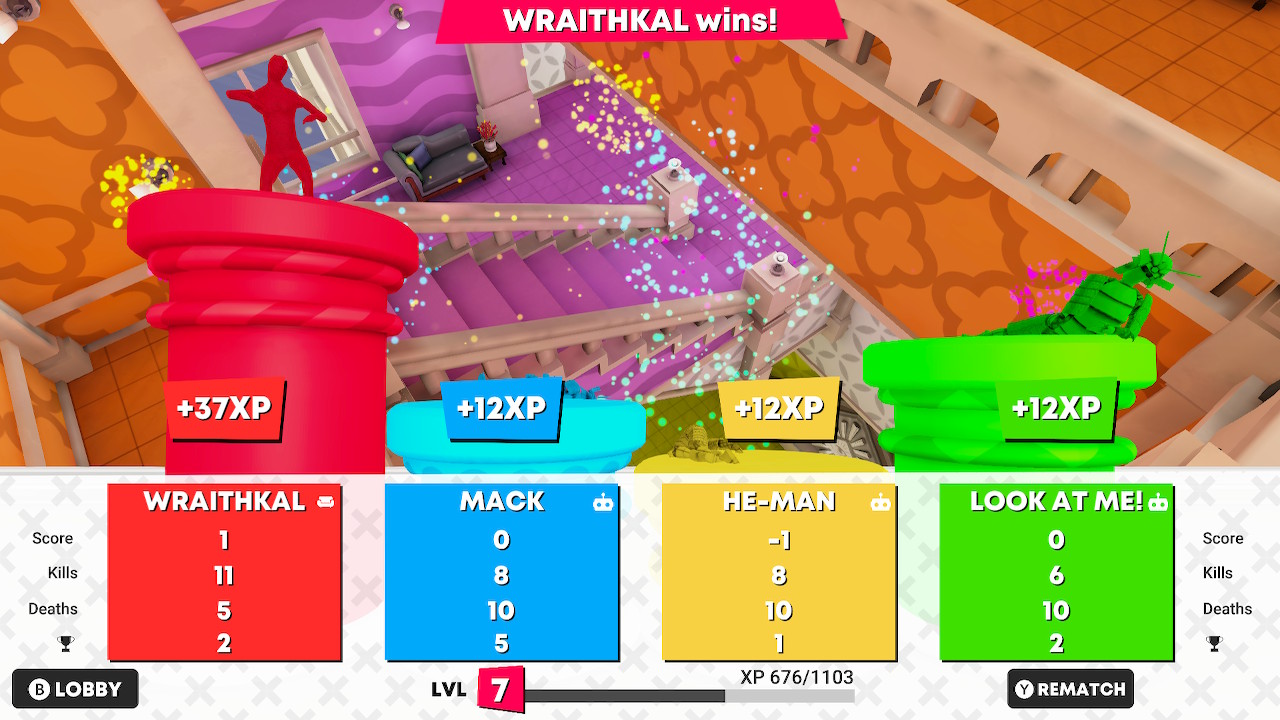 Now, to put this into perspective, spending an hour doing my best to kill everyone for those ever-delicious points got me to around level 7. Not too shabby, seeing how the final unlock comes at 50 (and I believe 30+ only brings weapon skins and ragdolls). Upon acquiring this 7th level, I’d unlocked no less than three additional modes, maps and weapons. Oh and unsurprisingly, deathmatch is the fastest way to grind, in my experience (no pun intended).

At the risk of sounding like a broken record: not too shabby, although I do wish unlockables were entirely cosmetic, but ah well. Didn’t drag down the overall experience, so I’d take it as more of a ‘FYI’ than criticism. As such… no online multiplayer and a bit of grinding required to access everything – those are the only bad things I have to say about Screencheat: Unplugged, and believe me, the pros outweigh the cons big time.

On the topic of pros, huge thanks to whoever at Samurai Punk came up with the idea of including bots ranging from easy to normal and, for the truly skilled, ‘dreamcrusher’, in difficulty. Because try as I might, even on the lowest level, victory was still hard-fought. Whether they were actually cheating, not requiring to screen look to see where everyone else were at any given time, who knows? And more importantly, who cares? They’re bots, and I did notice them being ‘dumb’ from time to time, so perhaps their programming is simply a bit random… and RNG hates me. That must be it.

Oh boy. Just realized that the core gameplay has yet to be explained. Apologies for getting ahead of myself like this, so here we go: everyone’s invisible. I know, already mentioned that, but that was several hundred words ago and… right. Anyway, while all players/bots are, at all times, invisible, how are they supposed to even remotely stand a chance at landing a hit? By way of blindly firing and praying, that’s how! Just kidding. 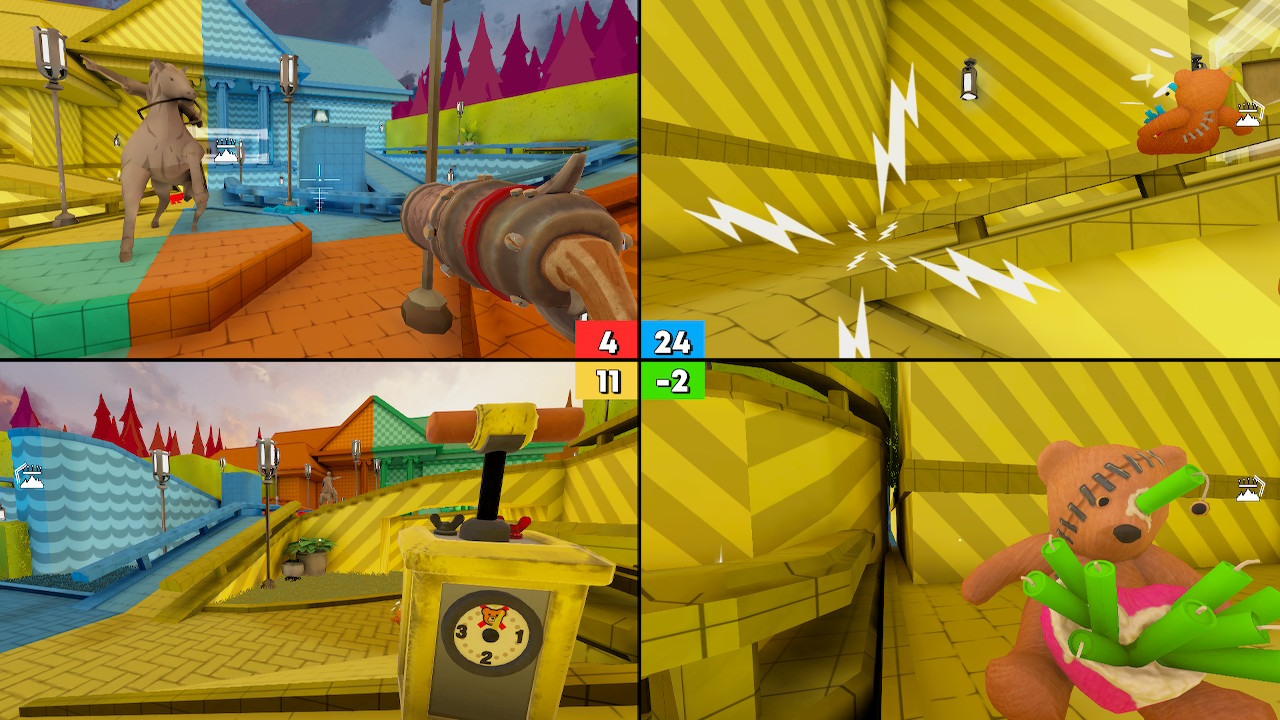 As you can likely tell from the above screenshot, the maps aren’t exactly overflowing with complexity, instead opting for a more symmetrical layout, areas/floors grouped into colors and such. This is key to tracking down and annihilating them your opponents, but a handful of unbreakable objects (ie. landmarks) sprinkled across to truly determine what’s/who’s where. Aside from weapon trails and the ‘this guy is camping!’ indicator, both of which can be disabled prior to starting a match, the color of someone’s surroundings, a bit of geometry and nearby objects are the only things that will give away their position. Ever.

Unless you’re playing Hillcampers, in which case… well, it’s quite obvious when someone is in the designated area (which moves every x seconds (one of numerous tweakable settings)); or Capture the Fun, as then the current ‘fun holder’ will give off a confetti trail. Aside from those two however, completely invisible. So pay attention to everyone else’s screen – as well as your own. Crazy? Chaotic? Both, and I absolutely love it. On top of aforementioned modes, there’s also even more zany stuff like Gold Rush, for those who enjoy a bit of coin collecting, and Murder Mystery for the Clue fans – to name but a few. 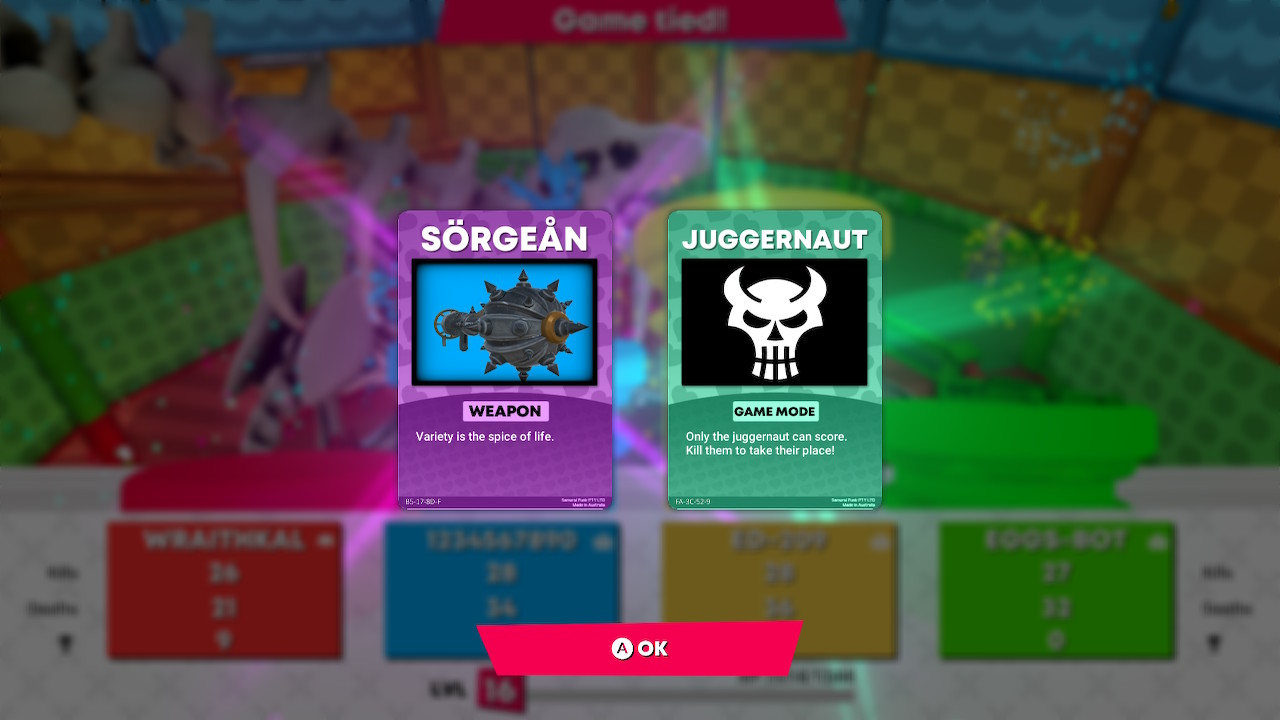 Needless to say, little will happen without weapons, and boy does this game ever have an interesting arsenal: from unconventional arms like the Bear Bomb and Chefolet to more traditional stuff like… oh I don’t know, how about Grenade Launcher and Revolver Rifle? Okay so admittedly, that last one is a bit odd, but certainly less so than the Bear Bomb. All quite interesting to use though, each requiring a unique skillset for proper application.

But that’s a huge part of what makes Screencheat: Unplugged so much fun, and the sheer amount of variety in terms of both game modes, maps and weapons doesn’t exactly hurt the experience either. Same goes for how customizable everything is, players able to tweak just about anything imaginable, right down to mode-specific settings. Want to punish those who ‘accidentally’ blow themselves up harder, force quicker respawns (or longer, with each consecutive death)? Maybe even adjust the overall pace by disabling all but the melee weapons? Playing on a large map with Hobby Horse as the only weapon is definitely something I’d recommend trying at least once.

Although those looking for a more fast-paced experience would do well to remain on small maps like Museum and Ascension, the first two maps. They have the added bonus for newcomers of being rather cramped too, ensuring kills will come quickly as little to no major aerial acrobatics is possible on these. Then, once players have gotten the hang of discerning the position of enemies by way of screen looking, move onto something bigger… like Holy Mountain (level 13 unlock). I personally prefer smaller maps where encounters are far more frequent; but to each their own, and like I said, variety is definitely one of this game’s strengths. 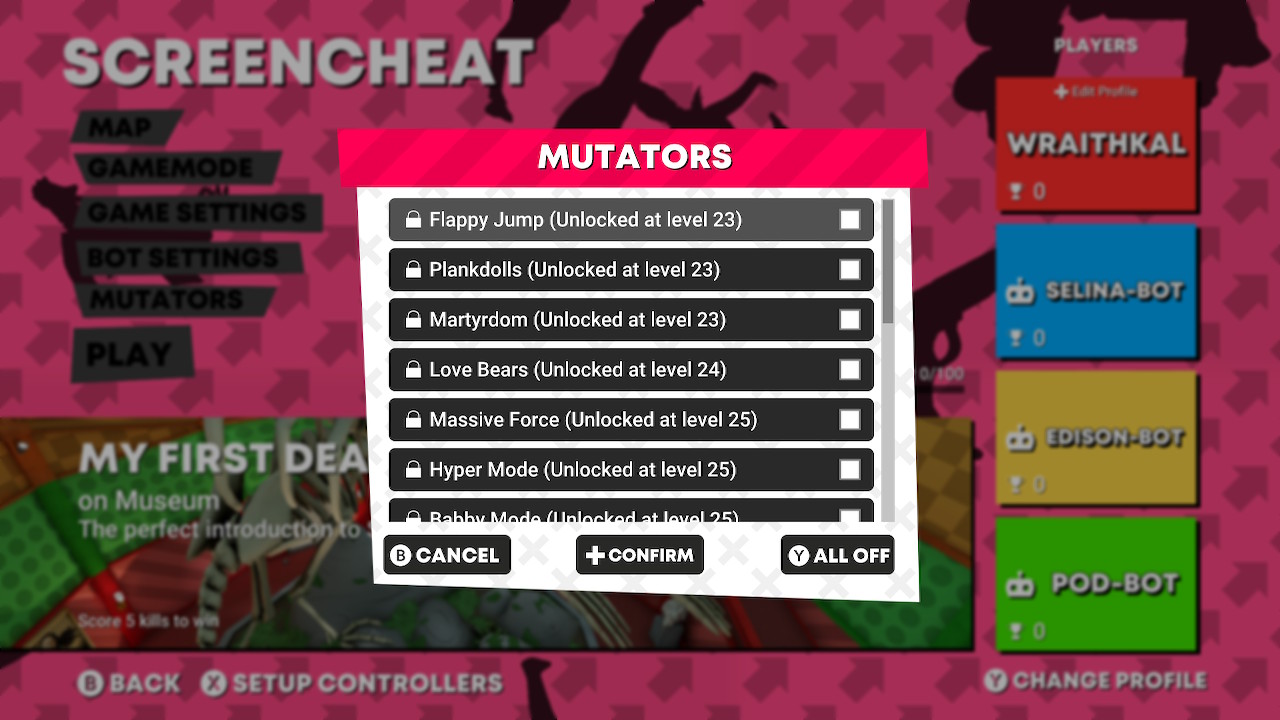 On a related note, mutators! Or at least, that’s what I’d like to say, but seeing how the lot only becomes available starting at level 24, it is unfortunately one part of Screencheat: Unplugged I’ve yet to experience, at the time of writing. Doesn’t stop me from guessing what each does however, the likes of Martyrdom (grenade dropped at death?), Hyper Mode (speeeed booooost?) and Flappy Jump (additional aerial acrobatics?) likely increasing the sheer fun – once unlocked. Even more so as multiple can be enabled at the same time, which brings back fond memories of Unreal Tournament, what with its wealth of obscure game-changers.

Something I don’t recall seeing much in other shooters – recent or ancient – is a ‘challenge mode’ of sorts, which in this case carries the name Time Trials. In it, players are tasked with racking up a relatively low kill count against a single bot, map of choice, weapon(s) and time requirement for bronze, silver and gold, respectively, pre-defined. This makes for a nice change of pace, if nothing else, and is bound to challenge all but the most skilled players – I certainly struggled to get more than a few bronze medals.

Speaking of struggling, I’m quite pleased to report that Screencheat: Unplugged doesn’t, performancewise. I did notice a couple of minor frame-rate dips when the action got intense, grenades flying everywhere, but that was it. For the most part, perfectly smooth, controls – which can also be modified – getting the job done, several ‘gamepad shooter’ configs available. I did find myself longing for the ability to use gyro to aim with the right joycon, but alas, no such thing. Stick sensitivity can be adjusted nicely though, and as I already mentioned, the classic setup works just fine. 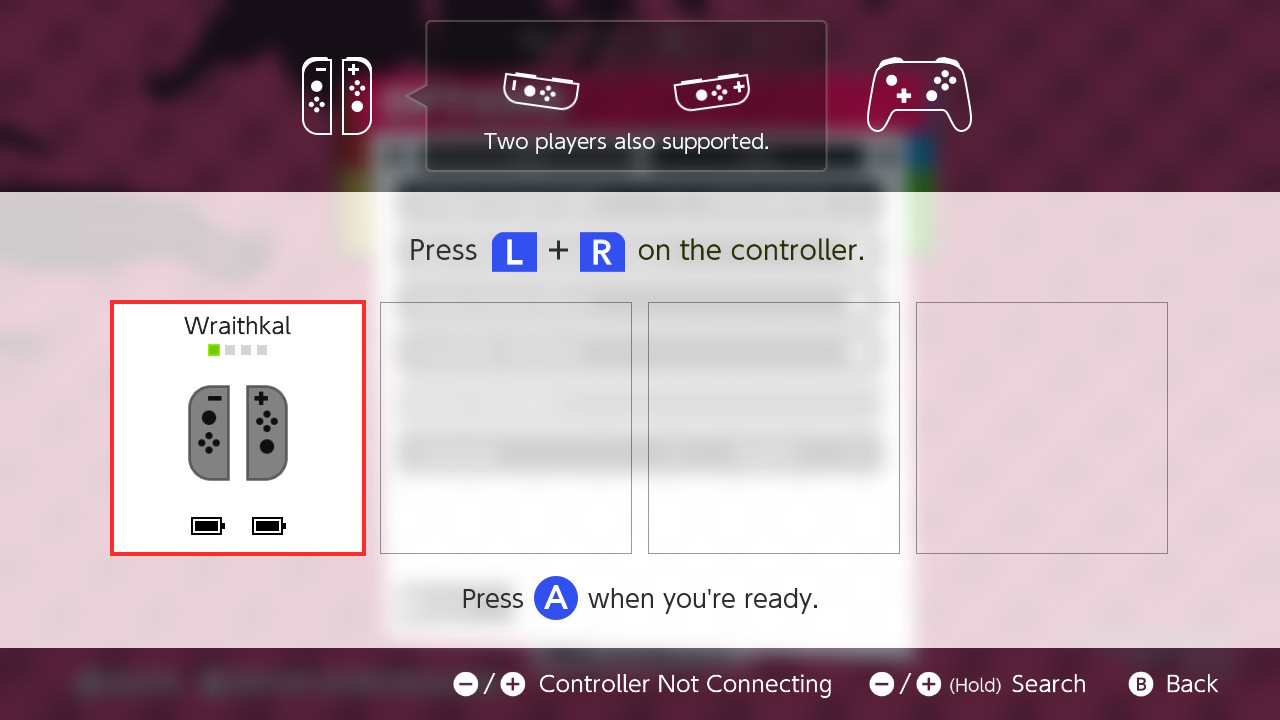 Which brings me to another of the game’s strengths: single joy-con multiplayer! That’s right, and no, I’m not crazy, nor am I recommending this to handicap my opponents (okay so maybe a little bit). It’s perfectly viable – long as everyone’s either playing like that, or don’t mind being ‘handicapped’, as it will take some getting used to; not entirely unlike playing Mario Kart Wii with a Wiimote. That said, having everyone use that control scheme is bound to get a few laughs if nothing else, during its initial learning curve. So there’s that too.

Come to think of it, during my testing with actual human players, however brief an experience, that was pretty much what happened: laughter and joy. Mostly from how strange the overall experience was though, but definitely also in no small part due to playing a shooter with a single joy-con. What a brilliant game, this. Truly brilliant.

In case you couldn’t tell, or for some reason decided to simply skip to this final paragraph, Screencheat: Unplugged is something I would highly recommend, and yes, even for those who utterly dislike shooters that focus entirely on PvP. In fact, this genre entry is more of a party game than, say, Call of Duty or Halo, being something most people will immediately be able to pick up and play. 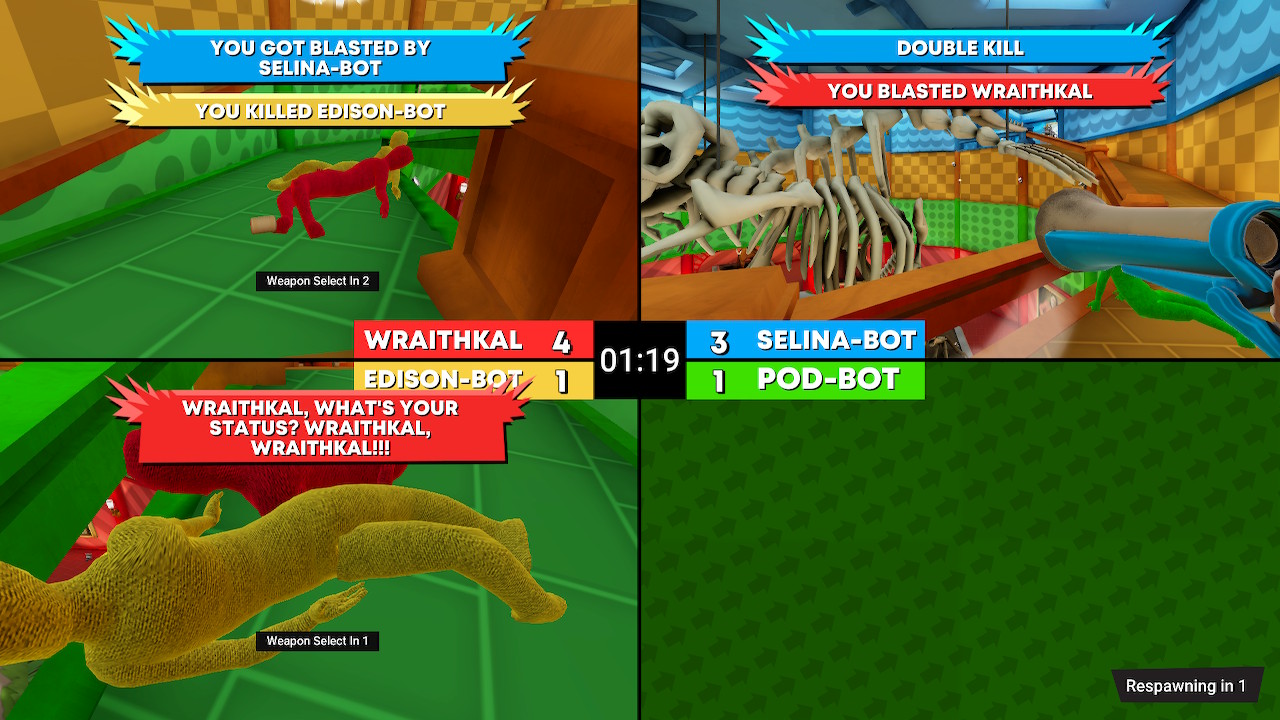 No loadouts or weapon attachments to setup prior to starting, killstreaks to manage in the heat of combat, or complex map layouts to learn. None of that. Just start the game, tweak/change game mode and/or settings for optimum fun, and off you go, screen looking like it’s 1997 again and everyone’s itching for another round of GoldenEye 007. Except it’s 2018, the name of the game is Screencheat: Unplugged… and screen looking is downright mandatory. That part about everyone itching for another round very much holds true though, as this one’s got some serious replay value.

Screencheat: Unplugged will be available on Switch come November 29, carrying a $12.99 price tag (with a 25% pre-order discount).