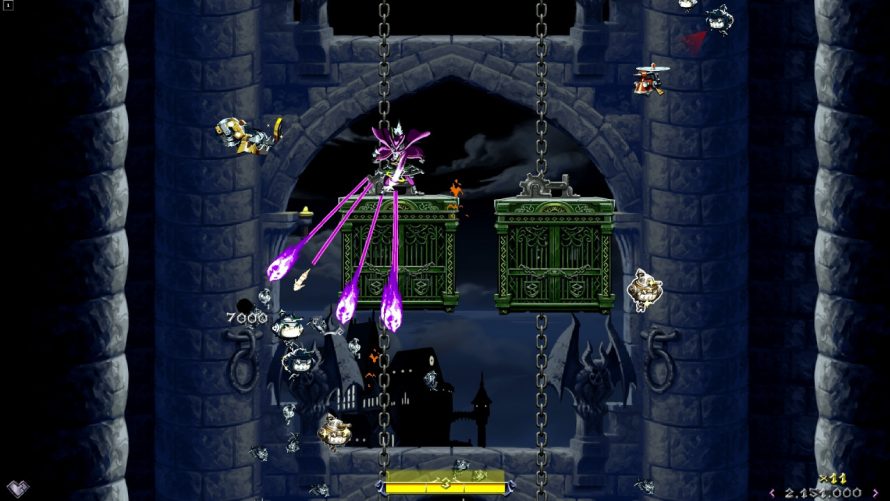 One orb. One messed up, malicious orb is all it took. Savant was having a great ol’ time until that darn orb came around and messed up his tower, almost literally turning the entire thing against him! Curses. Needless to say, this simply can not stand, so steady that aim, because it’s time to blast some bad guys in Savant -- Ascent while unlocking… power-up… CDs? Wait, what?!

Not even joking. In Savant -- Ascent, additional abilities are unlocked through the acquisition of CDs. Four pieces to a disc, each (piece) dropped by a special enemy, so you may want to cease firing momentarily and instead latch on to it. I mean, you’re going to need all the help you can get against this relentless onslaught of flying freaks if you’re to ever reach the top, where that darn orb’s likely busy laughing at all the mayhem he/she/it has caused. Yup.

Now, word on the street is, it’s a long way to the top if you wanna rock ‘n roll -- not so in this case. You do get to do plenty rockin’ though, as each new disc lets you play with different background music, which, quite frankly, is pretty groovy in and of itself. But as for the ascent itself… you’re probably looking at a good thirty minutes, maybe less.

That’s if you’re just looking to beat the story, anyway. Those looking to do, get and see everything, will be able to squeeze quite a bit more time out of this one, as clearing story mode unlocks both time trial and endless; both of which are considerably more challenging. See, even though input is limited to dashing -- or leaping -- between the left and right side of the screen while gunning away with unlimited ammunition, you’re still anything but invincible. Collide with an enemy three times and that’s it. Game over. You’re dead. Back to the main menu.

Fortunately, it does checkpoint ya after each stage clear, so you’re not punished (much) for failing. On top of that, everything does get significantly easier after acquiring/completing the second CD, which enables your character to split that first shot into five. No really, and each dash/jump stops you from firing momentarily, essentially turning the entire thing into a fast-paced gotta-keep-moving-and-shooting affair -- and a genuinely fun one at that.

It probably goes without saying, since you can clearly see it already in each screenshot, but… Savant -- Ascent looks amazing. Even better in motion, debris from slain foes flying all over the place, the protagonist’s cape flapping about as the action picks up the pace and cranks it into overdrive. Basically what I’m trying to say is that Savant -- Ascent, while relatively short, is a ton of chaotic fun. Combat feels great, even after minutes of gunning down similar-looking enemies, animations are fast and fluid, and then there’s the soundtrack -- no matter which CD you choose to play, it’s just so very… groovy.